Refuse fleets are at the forefront in ushering in growing use of CNG as a transportation fuel. In doing so, they are reducing their operating costs, lowering emissions, improving efficiencies and bolstering their competitive position.

Diesel’s long dominant position as a refuse fleet fuel is being usurped by compressed natural gas (CNG), a lower cost and cleaner, quieter burning fuel. In 2003, fewer than 700 natural gas fueled refuse and recycling trucks operated in the U.S. Play it forward and today the number has risen seven-fold or more, with between 5,000 and 7,000 in service (estimates vary by source). Six thousand to 7,000 new refuse trucks are shipped annually in the U.S., and more than 50 percent1 that entered service in 2014 are powered by CNG, up from 44 percent in 20132.

Ten years ago, virtually all of the nation’s CNG refuse trucks were based in Southern California. Today, CNG refuse trucks are operating in at least 20 states, according to the publication NGV Today. All indications suggest purchases of CNG refuse trucks will continue to climb, reaching 60 percent or more of collection trucks sales by 2016, maybe sooner. Here’s what you need to know about the inroads being made by CNG as a fuel of choice for refuse and recycling fleets.

CNG is natural gas mechanically compressed to less than 1 percent of its volume at standard atmospheric pressure and dispensed into high strength cylinders mounted on truck assemblies, where the gas is stored, typically at a pressure of 3,600 psi. The gas flows through tubing and a regulator that steps down the pressure at the point where the fuel enters the engine. The main difference between engines running on CNG and diesel is that CNG engines ignite fuel using spark ignition instead of diesel compression.

CNG is a Low Emissions Fuel

CNG is composed of 97 percent methane, the cleanest burning fossil fuel. On an energy per unit basis, burning methane produces 72 percent of the amount of CO2 that burning diesel does; tailpipe emissions of greenhouse gases (GHG) from CNG vehicles are about 20 percent of those emitted by comparable diesel engines. Federal regulations tightened permissible diesel engine emissions levels beginning in 2010 (“new diesel”) to the point where tailpipe emissions for other pollutants are similar to those emitted by CNG engines for new vehicles. But meeting new diesel emissions requirements involves installation of exhaust after treatment systems that have raised diesel vehicle prices and the prospective costs of maintaining the diesel units compared to trucks fueled by CNG.

CNG and the Fleet Cost Imperative

The low emissions qualities of natural gas provided the initial impetus to deployment of CNG refuse trucks during the 1990s. Even more compelling in driving the recent rise of CNG refuse truck deployments is a pronounced divergence in the price of natural gas and diesel fuels, resulting from use of technologies that have unlocked unprecedented reserves of unconventional natural gas in North America from shale rock formations. When dispensed as a transportation fuel, CNG is measured in diesel gallon equivalents (DGE); one DGE of CNG contains the same amount of energy contained in a gallon of diesel. With domestic reserves of natural gas now estimated to be enough to meet the nation’s needs for more than 100 years, U.S. prices for CNG as a transportation fuel have been ranging from $1.00 to $2.00 per DGE less than the price of a gallon of diesel.

Running on start and stop cycles with low fuel economy—on the order of 2 to 3 miles per gallon—refuse trucks in the U.S. consume an average of 10,000 gallons of fuel annually (municipal fleets tend to average less, private fleet more). A report issued last year by the U.S. Department of Energy (“Case Study – Natural Gas Refuse Fleets,” Feb. 2014) analyzed cost and performance data from fleets operating 70 CNG refuse trucks. The study found that using CNG as a fuel can translate into a fuel cost savings of about 50 percent for refuse fleets, or about 90 cents per vehicle mile driven, making a compelling case to convert refuse fleets to CNG from diesel.

Trucks fueled by CNG are outfitted with engines that share about 80 percent of the parts installed on diesel engines but have been modified to combust natural gas. CNG trucks are also outfitted with high pressure cylinders needed for on-board fuel storage of CNG. The engines, storage cylinders and affiliated components raise the cost of purchasing CNG refuse trucks to between $30,000 and $50,000 more than the cost of purchasing comparable diesel rigs.

Most refuse fleets fuel their CNG trucks by building time-fill fueling systems. With time-fill, CNG is delivered directly from a compressor that pressurizes the gas into onboard fuel storage cylinders, with the vehicles being fueled over several hours overnight. In some cases, a fleet will decide to design, build, operate and maintain (DBOM) this infrastructure in-house. In other cases, the fleet may contract out all or some DBOM functions to a turnkey fueling infrastructure provider, a number of which are active in the market, including Trillium CNG, Clean Energy Fuels, and TruStar Energy. The costs for building this fueling infrastructure will vary by the number of vehicles that need to be fueled—and the corresponding station size—but according to the above cited Energy Department report, on average, the cost of building a time-fill CNG station to fuel a 30-truck refuse fleet averages about $1.1 million. Some, mostly smaller, fleets decide to fuel their vehicles using infrastructure owned and operated by third-parties—independent fueling stations or stations owned by local government agencies; for example, where they may pay a higher retail fuel price than they would pay if they fueled at their own fleet-owned station.

The incremental costs of purchasing CNG vehicles and building fueling infrastructure are more than offset by lower fuel costs afforded by the price spread advantage of using CNG as a fuel. For example, for a fleet deploying 30 CNG trucks and constructing a typical time-fill station, payback can be recouped in five years, for vehicles that have an average service life of 10 to 15 years (Case 3 in the Table 1, page xx). The data presented in the table reflects higher diesel prices than those prevailing today, given recent declines in the cost of oil. Still, adjusting the calculations to reflect today’s average diesel price of $3.60 per gallon generates a still appreciable payback period of six years for the same 30-truck fleet. Payback is accelerated if the vehicles are fueled at third-party owned stations, because the cost of fueling infrastructure is avoided (although the fleet will pay a higher retail price for purchasing fuel). Also—a critical consideration—CNG savings is generally a function of the amount of fuel consumed, called throughput. So the paybacks shown in Table 1 may be conservative, being significantly accelerated in practice as more CNG trucks are deployed and the vehicles drive more miles (Case 2 compared to Case 3 in Table 1).

Incentives, in the form of tax credits, grants, rebates and voucher-based vehicle price buy-downs, can further accelerate payback period. California, Texas, Colorado, Florida, Indiana and Pennsylvania offer particularly robust incentive programs for purchasing vehicles that run on CNG. Florida offers rebates for up to $25,000 per CNG truck purchased or leased, for example, while Texas offers grants that can offset up to 90 percent of the incremental cost of purchasing or leasing heavy-duty CNG trucks. Other states offer incentives as well, and some states offer incentives for building CNG fueling infrastructure. The federal government has for several years provided for an excise tax credit of 50-cents per DGE of CNG used as a transportation fuel to be claimed on tax filings, as well as a tax credit of up to $30,000 of the cost of building CNG fueling infrastructure. The federal tax credits expired on the last day of 2014, but there is a high likelihood that during its current session, Congress will renew these tax credits retroactive to the first of January 2015. Depending on the type and amount of incentive received, payback period for deploying CNG trucks can be reduced to two to three years. A listing of incentives available for deploying CNG trucks can be found at www.afdc.energy.gov/laws.

Diesel prices have declined in recent months, narrowing the CNG-diesel price spread. However, fleet managers need to take the long-term view. With abundant U.S. natural gas reserves, the U.S. Energy Information Administration (EIA) has projected that natural gas prices will remain significantly lower than the price of petroleum for at least the next two decades and that natural gas prices will exhibit only one-third the price volatility of diesel fuel. Moreover, the retail price of diesel is much more closely linked to price of the underlying commodity—petroleum. Whereas commodity natural gas pricing accounts for only 20 percent of the price of CNG, global petroleum price accounts for 60 percent or more of the cost of diesel. Using CNG as a fuel allows fleet managers to more accurately anticipate and plan for their future fuel costs than more price-volatile diesel.

CNG engines are as much as 10 percent quieter than diesel engines. As a result, converting a refuse fleet to CNG from diesel can improve the fleet’s efficiency by allowing collection hours to be extended, earlier in the morning and later into the evening. This is particularly the case in residential neighborhoods, where noise issues can raise community objections. Because the savings from using CNG increases as throughput rises, extending collection hours can boost return on investment from deploying CNG trucks.

Localities are increasingly requiring that CNG refuse trucks be used as a condition of granting solid waste collection contracts. The town of Smithtown, NY pioneered this approach in 2006, becoming the first locality outside of California to mandate use of CNG trucks for refuse collection, and the approach has since become commonplace elsewhere. Even in communities that do not mandate use of CNG trucks, proposing to use a CNG fleet can improve a firm’s competitive position in the bidding process, with the promise of lower contract costs for fuel and reduced emissions and noise.

Expanding deployment of CNG vehicles opens the door to use of a form of natural gas fuel derived from landfills, wastewater plants and anaerobic digestion, known as renewable natural gas (RNG). RNG is chemically identical to fossil natural gas, and uses the same engines and infrastructure as fossil CNG. But being generated from organic waste, an abundant and virtually inexhaustible resource, RNG is fully sustainable. RNG can reduce tailpipe GHG emissions by 88 percent compared to diesel; RNG derived via anaerobic digestion of food and green waste can even be net-carbon-negative, the only such commercially viable transportation fuel right now. With 30 percent of solid waste being food scraps and green material, refuse fleets are uniquely positioned to capitalize on a “closed-loop” approach, collecting and processing organic waste to produce RNG for fueling vehicles hauling the same waste. Whether capturing and processing landfill gas into RNG to fuel its refuse trucks, as Waste Management is doing in California and Illinois, or separately collecting and processing organic waste to create net-carbon-negative RNG via anaerobic digestion, as the companies CleanWorld and Atlas ReFuel, a division of Atlas Disposal, are doing with their “Farm to Fork to Fuel” initiative in Sacramento, RNG is a growing option.

Refuse fleets are at the forefront in ushering in growing use of CNG as a transportation fuel. In doing so, they are reducing their operating costs, lowering emissions, and improving efficiencies while the use of CNG can bolster a firm’s competitive position when bidding on collection contracts. Continued pioneering in the use of RNG will further bolster the emerging position refuse fleets occupy as among the greenest fleets on America’s roadways.

Matthew Tomich is vice president at New York City-based nonprofit Energy Vision, which works to promote the most rapid transition to clean, petroleum-free transportation fuels. He can be reached at [email protected]. 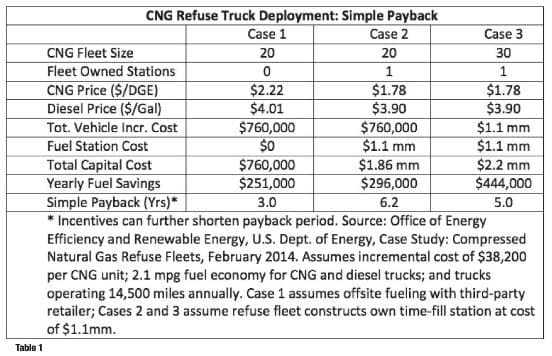 California Carpet Differential Assessment Will NOT Increase on January 1, 2023