After growing by more than 2% in 2019, global gas use is set to fall by around 4% in 2020, as the Covid-19 pandemic reduces energy consumption across the global economies. However, the resulting low gas prices, as well as clean air and climate policies, will promote further switching to gas from other more polluting energy sources, such as oil and coal. This trend was already underway before the pandemic, thanks to cost-competitive gas in key sectors including power, industry and transport, and major regions including Europe, North America and Asia.

The report shows that medium-term growth will come from increasing cost-competitiveness and increased global access to gas. A particular growth opportunity exists in liquefied natural gas. LNG imports reached 482 billion cubic meters in 2019, up 13% from 2018, and while this figure is expected to fall by around 4.2% in 2020, it could rebound quickly to previous levels as soon as 2021, depending on the persistence and longevity of the pandemic.

Ample natural gas resources exist to support demand growth, but greater gas infrastructure development is needed to support growth in the medium term. India is planning to almost double the length of its gas transmission grid, while China will grow its gas network about 60% by 2025. Ashish Sethia, global head of commodities at BNEF, commented: “The pandemic has created disruption in the global energy sector, but low gas prices will ultimately stimulate demand growth as the economy recovers. We have already seen unprecedented coal-to-gas switching in Europe, and clean air policies in major growth markets such as India and China will drive more gas adoption in the next few years.”

In the longer term, there are major opportunities to scale up the use of low-carbon gas technologies, but these depend on substantial policy action and infrastructure investment in the coming years. Clean hydrogen could abate up to 37% of energy-related greenhouse gas emissions, according to BNEF estimates. However, this would require a range of meaningful steps, including emissions pricing linked to clear, Paris-aligned long-term climate targets; harmonized standards governing hydrogen use; coordinated strategies regarding regional and global infrastructure roll-out, and the deployment of hydrogen-ready equipment, such as pipelines, gas turbines and end-use appliances. 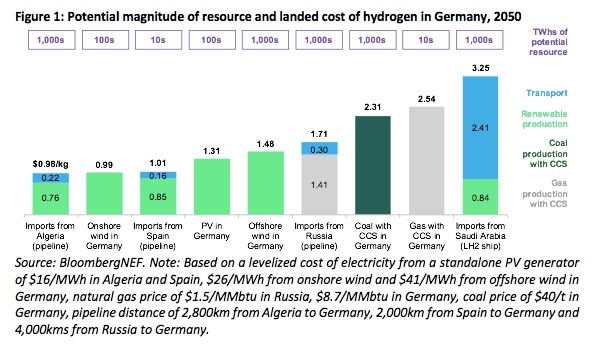 Jon Moore, CEO of BNEF, said: “It is increasingly clear that the goals of the Paris Agreement cannot be met without a substantial scale-up of clean gas technologies – such as hydrogen. While the economics are challenging today, a joined-up policy approach could unleash the investment needed to bring costs down, develop scalable business models and drive adoption across the hard-to-abate sectors.”

The development of an international hydrogen market could also accelerate adoption. The report finds that Germany, which is pursuing rapid development in hydrogen, could procure cost-competitive hydrogen (at about $1/kg) in 2050 from a variety of sources, including via electrolysis from its own domestic renewable power, or via pipeline imports from North Africa or Southern Europe.

Snam CEO Marco Alverà said:“The hydrogen market is on the verge of a revolution. The goal is to bring down the cost of green hydrogen until it becomes competitive with fossil fuels in many applications in the next five years. A smart way to scale up hydrogen production is blending it with natural gas in existing gas pipelines, something Snam has been testing for two years. We envision a future where clean hydrogen produced in Southern Italy or North Africa can be transported through our pipelines to serve Central and Northern European needs. While matching supply and demand in the most efficient way, the infrastructure is expected to play a central role in supporting the penetration of hydrogen in the energy mix.”

Joe Kang, President of IGU, said: “This pandemic crisis comes at great cost to the industry, the economy and society at large. It also reminded the world about the value of clean air and healthy environment for wellbeing, providing a unique opportunity to rebuild better. Gas is an abundant, clean, accessible and flexible substitute to more polluting energy sources, and supporting greater fuel switching from coal and oil to gas in the immediate term, while ensuring infrastructure is ready to accommodate progressively greater scale of clean gas technologies in the coming decade, is the way to secure a sustainable and prosperous future.”

The report also reviews the long-term outlook for natural gas under different existing scenarios, including those from the International Energy Agency, BNEF and IGU analysis. The IEA’s Stated Policies Scenario, from its 2019 World Energy Outlook, envisions gas use growing 1.4% per year to 2040, while BNEF’s economics-led New Energy Outlook 2019 foresaw 22% growth in power sector gas demand to 2050.

In contrast, the IEA’s Sustainable Development Scenario sees natural gas use declining from the end of the 2020s onward as the global energy demand flattens and the world embraces stronger climate action. And both IGU and BNEF analysis indicate that around one-third of energy-related emissions could be abated by adoption of clean gas technologies.This divergence in outlooks highlights both the risks and the opportunities for the global gas sector in the energy transition – and the importance of actions taken by both industry and government to capture the new opportunities and mitigate the risks for the sector in the coming decades.

WASTECON® Zooms in on Disruption

How Do Lubricants Meet the Needs of Waste Fleets?

How Video Technology is Transforming Safety for Waste and Recycling Fleets

Teaming Up with a Strategic Partner to Increase Revenue