IntegriCo Composites strives to protect the planet by offering a more environmentally-friendly alternative to wooden railroad ties.  By using IntegriTies™, which are composite rail ties made from landfill-bound recyclable plastics, 25,000 trees were saved from becoming railroad ties in 2018. “We are proud to remain at the forefront of responsible manufacturing. Through building long-lasting and versatile IntegriTies™, we offer railroads an option to the traditional wooden railroad tie,” said IntegriCo CEO Scott Mack.

The United States cuts down approximately six million trees annually to replace 24 million wooden ties on 200,000 miles of railroad tracks.  Trees are vital to air quality by storing and releasing carbon, but factors like deforestation threaten the important role of trees around the world. 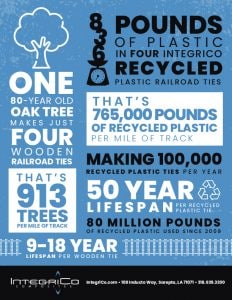 Each April 22, Earth Day raises awareness for environmental protection, including the estimated 60,000 different species of trees.  One 80-year-old oak tree will, on average, make four railroad ties.  One mile of railroad track uses about 3,650 railroad ties, which means at least 912 trees are needed for one mile of track.  Alternatively, IntegriCo converts 765,000 pounds of plastic into IntegriTies™ to create one mile of railroad track.  IntegriCo has diverted 80 million pounds of landfill-bound plastics since 2009.

As many as 4 million wooden railroad ties, treated by Creosote, will end up in landfills every year.  This preservative extends the life of a wooden railroad tie but complicates the disposal process.  Creosote includes cancerous carcinogens that are released into the air if burned, and the chemicals can also be absorbed into soil and water systems.  No chemicals are needed to create or preserve IntegriTies™, and these recycled plastic railroad ties have a calculated lifespan of 50 or more years – five times that of wooden ties.