Nobody needs to tell you that the duties of your residential haulers are different from your roll-off drivers. Correspondingly, the protective needs of the different divisions of your workforce can be as diverse as their duties. They all need work gloves, yes. However, a hauler who wrangles curbside garbage cans needs a different pair of gloves than a worker who is tugging on guide cables and maneuvering heavy dumpsters into place.

Recommended PPE
As an industrial supply company specializing in the needs of waste contractors, we have developed a list of recommended PPE for the typical job assignments. 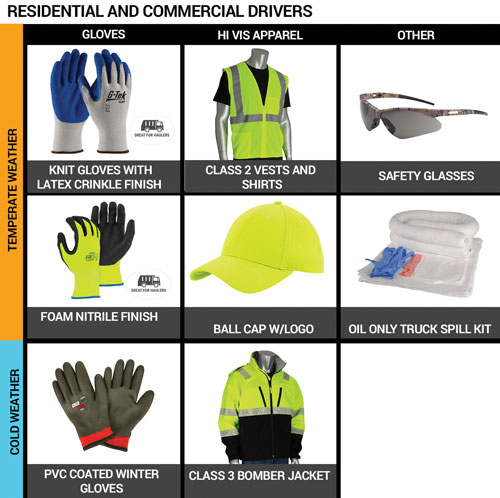 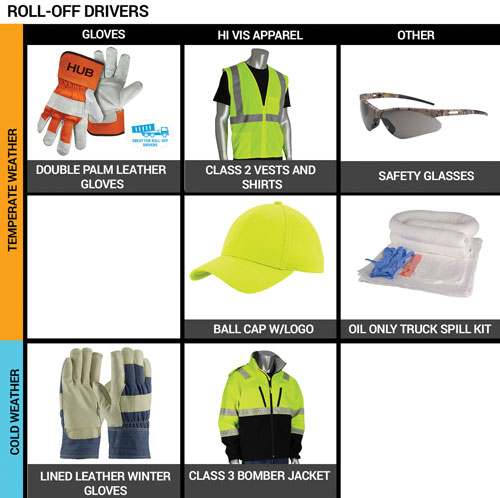 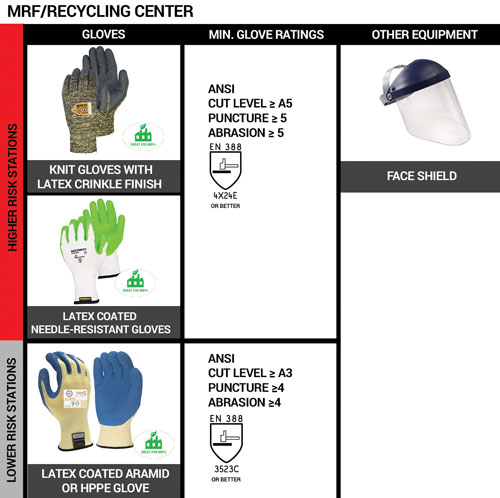 The Best Equipment Choices Are the Ones That Work for You and Your Team
These charts represent a starting point in outfitting your crew and should be freely modified to match your climate or other unique demands of your team. Your PPE supplier should be able to advise you on any questions you have regarding suitability of a safety solution for your situation. 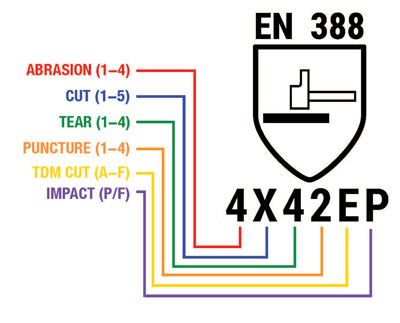 Some years ago, a regulatory agency in Brussels, Belgium, mandated that every pair of work gloves sold in the E.U. be tested and labeled for four kinds of mechanical risks. The ratings system known as EN 388 was encapsulated in a badge depicting a hammer within a shield, and the four number codes underneath the shield indicated the results of the four tests.

Since many gloves sold in the E.U. are also sold in North America, the EN 388 shield has become a familiar feature on work gloves here, and the information it provides is useful in evaluating the performance characteristics of gloves and sleeves.

Ordinarily, we would rely on the American-based ANSI standard enshrined in ANSI/ISEA 105. However, EN 388 testing is mandatory in the E.U. and ANSI 105 testing is voluntary. Since it costs the manufacturer extra to get the testing done, the only time a glove will receive an ANSI rating is when the manufacturer believes it will help sell more gloves. Therefore, we rarely see an ANSI rating for puncture or abrasion, since the EN 388 ratings for these risks are based on the same test. We do see ANSI cut ratings, because the ANSI test method for cut resistance is completely different than the EN 388 test, and it is much better than the EN 388 test in evaluating gloves with a higher cut resistance.

As evidence that the ANSI cut resistance test is superior to the EN 388’s test, the CEN revised its EN 388 standard in 2016 to add their own version of the ANSI test as a fifth digit alongside the original four numbers of the badge.
The interpretations of the numbers and letters underneath the EN 388 badge can be found in the accompanying graphic. In this example, the tested glove has received a 4, the highest rating in abrasion resistance, as indicated by the digit furthest to the left in the code sequence. The second position is where the original test method cut level rating will be found. If you see an “X” instead of a number here, that is simply a placeholder, and it means you should refer instead to the ANSI-style test, which you will find as the fifth character in the sequence.

In the third position, we find the score for the tear test, which measures how easily the glove material can be torn after it has been snagged. This glove has received the highest rating in this risk area. The fourth number is the score for puncture. This is not a needle stick test; rather, it tests susceptibility to piercing by pointed objects much thicker than a needle. This glove has scored a 2 out of a possible 4 in this category. Finally, we see a letter in the fifth position of the code. This is the cut-resistance test score based on the same testing method prescribed by ANSI/ISEA 105. An “E” rating is the second highest possible score, roughly equivalent to an A5 on the ANSI scale.

David Miller is the Waste Industry Manager for HUB Industrial Supply (Lake City, FL). He is a Certified Safety Professional and works with managers to effectively implement and manage PPE and MRO programs in the waste industry. He may be reached at david@hubindustrial.com. HUB Industrial Supply is an Applied MSSSM company.

The Resiliency of Circular Economies

DS Smith in Columbia to Supply 750,000 Produce Boxes to Families in Need

EPA at 50: Improving and Increasing Recycling Across the Nation to Preserve Resources and Land

Medical Bins: Where Do I Begin?