Transfer stations operators recognize that rain and snow will be brought into buildings from the outside when vehicles deliver MSW. This presents an increased likelihood of worker and customer slips due to reduced traction on wet or icy floors. It is viewed as an unavoidable safety hazard. In the context of an household hazardous waste (HHW) collection facility, there are additional dangerous chemical hazards involved when water is added to the operating equation.

HHW is a subset of the MSW stream. For the vast majority of MSW, contact with water yields no chemical reaction. It just gets wet. There are some serious exceptions to this when certain types of HHW meet water. Because HHW is a relatively small part of MSW it is often ignored when MSW is characterized. The axiom “what gets measured gets done” has implications on how HHW is viewed, or, in this case, obscured. Let’s briefly look at how HHW is off the waste characterization map. 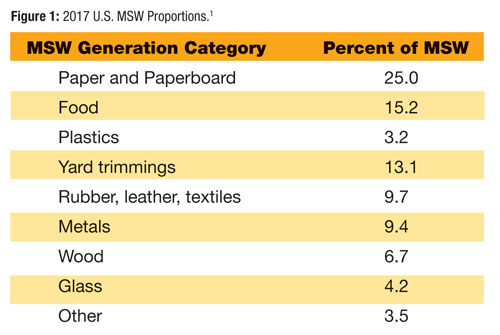 MSW Characterization Often Ignores HHW
Figure 1 shows the most recent national tally for MSW published by U.S. EPA in broad categories as of 2017. The only HHW listed in the more detailed tables accompanying the EPA annual report is lead-acid batteries, which are estimated at 1,550 thousand tons in 2017 representing 1.2 percent of the MSW stream with more than 99 percent being recycled.2

All other types of HHW are subsumed in the 3.5 percent broad category “Other”. In the few instances, where MSW waste characterization studies that have included HHW as a separate category, the results have shown HHW to be between a fraction of a percent to a few percent of the MSW stream. In order to get a representative sample size to characterize HHW, you have to sort through a lot of MSW—an expensive exercise. HHW is clearly present, but solid waste characterization studies are not a very efficient method to assess its quantity or type.

In addition to HHW in MSW, HHW is known to be routinely disposed of in municipal wastewater and stormwater systems, as well as onto the ground. So even where MSW characterization for HHW exists, it is certainly under-representing actual HHW generation levels in the community. Even though the estimated quantities of HHW generated is small compared to total MSW, its relative risk for chemical reaction and worker exposure incidents is disproportionately large.

Rodenticides, rodent poisons, containing zinc phosphide have been on the market since the late 1940s and are still sold in stores today. Zinc phosphide is classified as a DOT dangerous-when-wet material and, when exposed to water, generates a flammable and toxic gas called phosphine. If phosphine gas concentration exceeds 1.8 percent in the air, it will spontaneously combust starting at 104ºF—a hot summer afternoon in many places.3 Clearly, this is a material that, if spilled, you do not want it to contact water, especially if the water contact could have been avoided or mitigated through better weather protection.

Some pool or spa chemicals can be very reactive and triggered with the addition of a little water. According to the U.S. EPA, “Pool chemicals may become a hazard when they become wetted by a small quantity of water… Pool chemicals involved in fire or toxic vapor release are likely to include those that add chlorine or a chlorine ion to the pool water for bacterial control. Chemicals that release chlorine are among the group of chemicals that are classified as oxidizers. These pool oxidizer chemicals include calcium hypochlorite, sodium hypochlorite, and chlorinated isocyanurates.”4

Calcium carbide reacts immediately with water to form acetylene gas, which is highly flammable and potentially explosive in the air. For many decades, cave explorers and miners used “carbide lamps”, which slowly drip water into a small container with a few ounces of calcium carbide to produce just enough pressurized acetylene gas to light a small flame headlamp. Figure 2 shows a helmet with an integrated carbide lamp. This lighting method was also used in early automobiles, motorcycles, and bicycle headlamps.5 Calcium carbide was usually sold in metal containers with a pound or more in each. Even though calcium carbide is now rarely employed by spelunkers or miners for lighting in the U.S., it still arrives at many HHW collection facilities each year. A 2015 safety data sheet says to “Dispose of empty containers as unused product. Product or containers must not be disposed together with household garbage.”6 This is good advice. You do not want to create the literally explosive situations where calcium carbide comes into contact with water in MSW or at an HHW collection site due to poor weather protection.

Water in Facility Receiving Areas
Each of these three example materials are routinely delivered to HHW collection facilities from homes across the country. A lack of weather protection increases the risk of an unintended dangerous chemical reaction if any are accidentally spilled where water is present or are rained on directly. Therefore, at the HHW receiving areas, where the materials pass from the homeowner to the HHW collection staff, it is important to prevent contact with water. 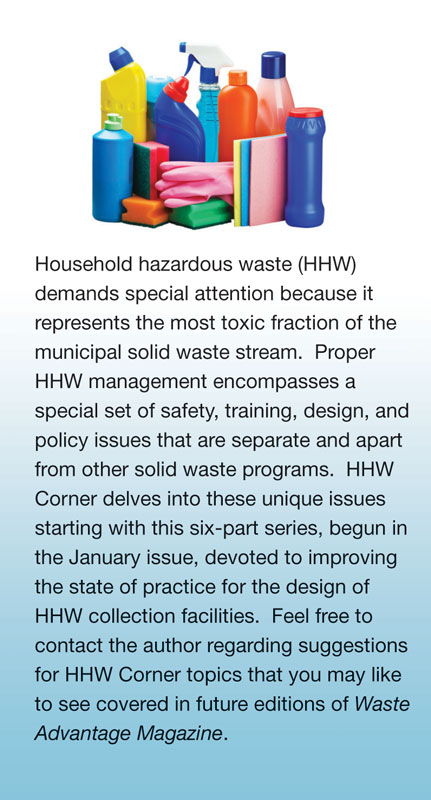 Unfortunately, many HHW collection facility designs have not accounted for this need. Some HHW receiving areas do not provide a roof overhead and directly subject arriving HHW to precipitation. More common is a design where the receiving area has a roof canopy and sloped spill containment, but the canopy edge coincides directly above the edge of the sloped containment area. The problem soon becomes evident as with only the slightest of breezes precipitation lands in and accumulates in the spill secondary containment area. The result is shown in Figure 3 where a significant puddle of windblown rain has accumulated in the sloped HHW collection facility receiving area.

Although it is impossible to completely eliminate water tracked in on vehicle tires during a rain event, with some thoughtful design you can avoid the majority of blown precipitation from landing in your receiving areas.

Design to Mitigate Precipitation in Receiving Areas
Wind-blown precipitation can be effectively mitigated with proper roof overhangs and rain screens. Figure 4 shows an HHW receiving area with roof overhangs of 10 feet beyond the sloped spill containment. In addition, there are translucent wind/rain screens that intercept any blown precipitation from the side of the receiving area. This strategy has been shown to be very effective in keeping the area as dry as possible while allowing effective natural lighting. Although it is most cost effective to design weather protection before construction, in many cases, it is possible to retrofit buildings to extend roof overhangs and add rain screens.

Wrap Up
HHW is a small proportion of MSW, but it is “hidden” as it is not typically identified in MSW characterization studies. Nonetheless, one of the dangers of certain HHW types is their chemical reaction with water, which includes creating fire, toxic gases and explosion hazards. To mitigate the likelihood of these dangerous uncontrolled chemical reactions, HHW facilities need to be designed or retrofitted to exclude precipitation. This is easily accomplished through extending roof overhangs and providing rain screens outside of the HHW facility receiving areas. | WA

The next issue’s HHW Corner column will focus on HHW Reuse.

More Than 1.2 million Mattresses Recycled in Connecticut Since 2015