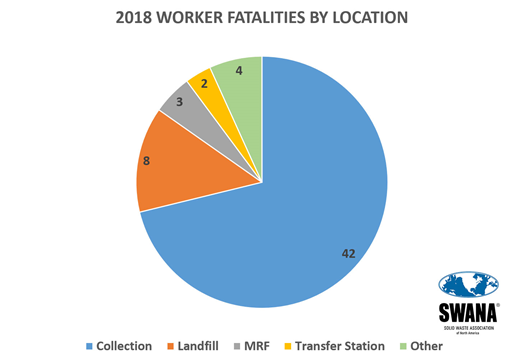 In reviewing data collected from a variety of sources, SWANA found that struck by incidents were the most common cause of fatality overall, followed by collisions and rollover incidents. These represented nearly 50 percent of all worker deaths. About 10 percent of victims were on the riding step when the fatality occurred. The cause of deaths at landfills, MRFs and transfer stations were more diverse than in collection, though being struck by heavy machinery or lockout/tagout (LO/TO) failures were common.

The industry’s safety record in 2018 was not acceptable, with at least 19 more worker fatalities than in 2017,” noted David Biderman, SWANA’s Executive Director and CEO. “Most of last year’s increase involved collection workers, despite the industry’s success in getting states to pass Slow Down to Get Around laws and efforts by SWANA and others to improve safety on the route, as well as at post-collection facilities.”

“SWANA calls on local governments, private companies, and others to devote more resources to safety and protecting the lives of those who work in the industry,” Biderman added.

Fatalities among members of the public increased slightly in 2018 from 95 to 101 deaths. These incidents involved the solid waste industry in some fashion, most frequently via a traffic collision with a collection vehicle. About three quarters of the victims were drivers or passengers at the time, and about 14 percent were on a motorcycle or bicycle. Pedestrian deaths represented another 11 percent of all fatalities involving a member of the public. 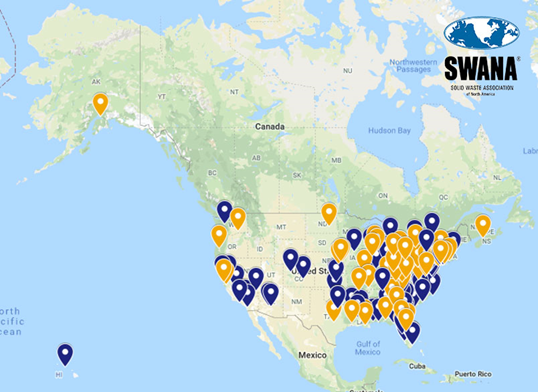 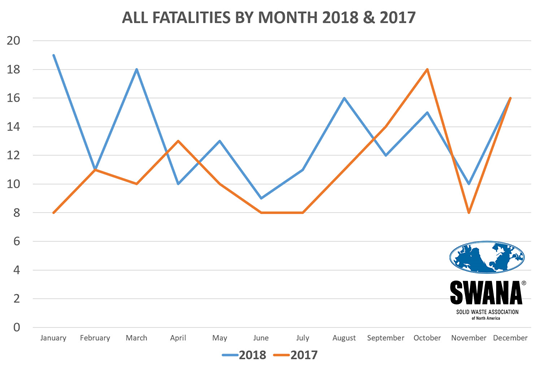 “The 2018 data are of concern to our Safety Ambassadors throughout the United States and Canada,” says Matt Morales, P.E., Arizona SWANA Chapter Safety Ambassador, Cinder Lake Landfill Project Manager. “While it is difficult to learn of the increased fatalities, it strengthens our dedication to turning the industry around. It’s obvious that we need to increase our effectiveness on this matter. We need more ‘real-time’ data on trending accidents and incidents in our states, regions, and provinces. SWANA’s Arizona chapter is forming an alliance with the Arizona Department of Safety and Health, to provide members with more readily available access to trends. Having access to this data will allow us to keep our eyes on the windshield rather than looking through the rearview mirror.”

Morales added, “to increase awareness and accountability, SWANA Safety Ambassadors are tasked with bringing safety training events to our drivers. SWANA chapters are holding Hauler Safety Outreach events in their states and provinces. These events provide the chance for us to reach out to both private haulers and municipal collection operators. Importantly, it helps them know that we care about them. Finally, the event is unique because each attendee is given the opportunity to take the SWANA Safety Pledge. For operators, the pledge is a demonstration that SWANA stands behind their efforts to be safe out on the road.”

SWANA provides a variety of safety resources to its members throughout the United States and Canada. These include its award-winning chapter-based Safety Ambassador program, new Slow Down to Get Around stickers, frequent safety training events, and Hauler Safety Outreach at disposal sites. More information about SWANA’s safety program is at www.swana.org/safety.

On April 28th, please join SWANA in honoring the men and women who have died on the job during Workers Memorial Day. During this time, we reflect not only on those we have lost, but also on how we can keep the hundreds of thousands who work in the industry safe. SWANA asks all solid waste professionals across North America to join the many others who have already committed “to help everyone get home safe every single day” and take the SWANA Safety Pledge. Together, we can do better, and as Biderman notes, “nothing we do at SWANA is more important.”