Spotlight on Hillsborough County, FL: A step-by-step guide to launching an education campaign.

Hillsborough County is one of the largest communities in Florida. The County has more than one million residents, 240,000 households and covers more than 1,000 square miles of land. Yet, participation in curbside recycling was relatively low and tonnages had remained flat over the last four years. In the summer of 2009, the County Solid Waste Management Department (SWMD) partnered with the Curbside Value Partnership (CVP), a national program that helps communities grow their curbside programs through education, to curtail the trend and rejuvenate awareness in recycling among residents. Working together, it was determined the best way to really impact recycling was primarily to recruit new recyclers and secondarily to motivate existing recyclers to be more diligent. To accomplish this, a creative and innovative outreach campaign was designed in order to cut through the clutter and get residents talking about recycling as they had never done before. To develop and execute this campaign, the following steps were used.

Step One: Create a Game Plan

Planning is a critical first step in any successful campaign. We kicked off our planning process by creating an in-depth communications plan that included everything from goals to the tactics we planned to implement. To build the plan, we involved representatives from various departments in the County, all of whom provided their own perspective and ideas that were then melded into the overall plan. Highlights from the plan included:

No plan would be complete, of course, without consideration given to how we would measure success at the end of the campaign period. The indirect and direct indicators of impact we thought important to measure included Web site hits, contest entries, bin requests, media coverage, calls and e-mails to the County, bin setout rates and tonnage (though we were not anticipating an immediate impact on tonnage due to the economic conditions we were facing in the County).

To further incentivize residents, we developed a contest (prizes were donated by local businesses) that included five different “Famous Bins” deployed around the County as ads—on billboards, bus sides and even in several movie theaters (see Figure 2). The call to action: “Get your free bin and ‘Guess Who?’ to win!” led people to the Web site to enter the contest. Visitors to the site were also encouraged to sign up to receive recycling bins.

The County had an existing Web page dedicated to solid waste services, but it contained nothing on curbside recycling. A simple Web site was developed (www.hillsboroughrecycles.org) to act as the official contest entry form and more importantly to provide residents, for the first time, a way to order bins online. The site also serves as a clearing-house of recycling information with a detailed FAQ page.

As in any campaign, winning the support of local government officials and other environmental and community organizations can mean the difference between success and failure. Since our target audience was so widely dispersed, it was important to reach out to these groups as well as the homeowners associations to gain their support for the campaign. They helped spread our messages further using their own publicity channels to promote our campaign through newsletters, e-mail lists and Web sites.

Partly determined during the campaign planning stage, we finalized what materials would be needed to help spread campaign messages. We came up with a final list that included: key messages for internal use, program FAQs, newsletter and Web site copy for stakeholders and media materials such as press releases and letters to the editor.

The copy for stakeholders contained generic messaging about the campaign, including key facts about the contest, the new Web site and why recycling is important to Hillsborough County. An interested organization could personalize the copy and post it to their Web site or publish it in a monthly newsletter.

We also planned to make use of a free channel for publicity by including campaign information in water bills to all homeowners. This resulted in an immediate spike in Web traffic and bin requests in the middle of the campaign.

Events can be an easy way to generate news coverage and buzz in a short amount of time, at low or no-cost depending on how they are done. We determined that a press conference would be a great way to officially launch the campaign, and give us some newsworthiness. When planning this event, the following elements were kept in mind.

We determined that a local Materials Recovery Facility (MRF) would be the ideal location for an eventbecause the media like to capture the active process of recycling. We held the event mid-morning, which is convenient timing for media (plan meetings where coverage decisions are made are typically held first thing in the morning).

We made sure to include relevant and high profile representatives from the Solid Waste Management Department and CVP as well as a County Commissioner. We provided our speakers with talking points that included the relevant key facts about the campaign for easy reference. Additionally, we invited VIPs, including representatives of the three franchise haulers operating within the County, staff from Keep Hillsborough County Beautiful (KHCB) and other County officials.

Logistical needs such as audio/visual equipment, seating, parking and catering were determined well in advance. The County Parks Department helped provide almost everything we needed, down to the decorative plants. We also had a custom backdrop printed that incorporated the campaign Web site so that in every camera shot our Web site was being promoted.

To ensure media attention throughout the campaign, we kept regular contact with the major media outlets in the area. In addition to soliciting their attendance at the launch event, we provided press releases announcing the partnership, the campaign and contest and the press conference. At the press conference we provided the media with a press packet that included the program FAQs, the official launch press release and an agenda for the event. We clearly identified the best interview and photo opportunities as well as any interesting news hooks that would provide depth to their stories. After the event we monitored local news coverage to track stories and ensured the correct key messages were heard in all stories referencing recycling.

Cost-effective advertising outlets such as billboards along major thoroughfares, radio traffic spots timed with rush hour, and cinema advertising in select neighborhoods were crucial to the overall campaign strategy. All ads were launched simultaneously with the kick-off event to give the launch greater impact. Advertising may not be an option for some, as it can be cost-prohibitive, but there may be room to negotiate less expensive options (such as “pay for one, get three” or having your billboards is less high profile areas) especially in a down economy.

After the launch event we began working with Keep Hillsborough County Beautiful to help us continue the momentum of the campaign at minimal cost to both parties. KHCB helped by posting campaign information on their Web site and e-mailing it to their list of volunteers and supporters. They also submitted a letter to the editor to the local paper further demonstrating their support of the campaign.

Each year the County attends hundreds of special events to distribute recycling information. In order to be more efficient with the materials distributed at events, we developed a simple streamlined program booklet that mirrors the campaign look and reminds residents of the basics of recycling (see Figure 3).We also determined which events reach residents who are not already recycling (where we can get the biggest bang for the buck).

After all the hard work of planning and executing the campaign, we took stock of the results to determine our success through:

Though the official contest is over, the momentum gained does not have to slow. We are considering plans to sustain the awareness that include starting a Facebook fan page, conducting Search Engine Optimization for the Web site to make it easier for residents to find and developing an “E-mail Alert” system for residents.

You too can get your community involved through ongoing and consistent effective education. Remember the key elements of a successful campaign:

By keeping these essential steps in mind, you too can create a public education plan that will flourish and keep your community aware of developing curbside programs.

Katie Brown is a Waste Reduction Specialist in the Solid Waste Management Department of Hillsborough County, FL. She can be reached at (813) 276-2924 or via e-mail at [email protected]. For more information, or to check out the campaign, visit www.hillsboroughrecycles.org

Steve Thompson is the Executive Director of the Curbside Value Partnership (Stamford, CT), a Keep America Beautiful program. He can be reached via e-mail at [email protected]. For more information on CVP’s partner communities, visit www.RecycleCurbside.org. 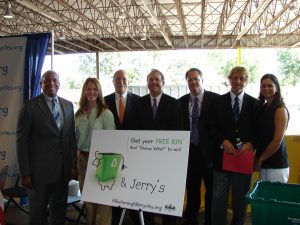 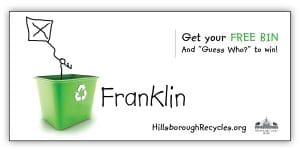 Billboards featuring the County campaign were placed in strategic locations around the area.

A booklet featuring the campaign and all of the “Famous Bins” was developed for distribution at area events.

Chart depicts bin requests from the campaign period, compared to the same period the year prior. Overall, a 552 percent increase was observed.

Images are courtesy of the Curbside Value Partnership.