Good planning goes a long way. It’s what elevates a good idea on paper and gives it the best opportunity to succeed in reality. It’s what sets clear, achievable goals while still anticipating changes that may be necessary down the road.

The Lee County Solid Waste Division set out on a clear mission in 2007 when it developed the concept for the Lee County Composting Facility (LCCF) in Felda, FL, a facility that was initially completed in February 2009. By recycling approximately 30,000 wet tons of biosolids and yard waste annually from seven different feedstock plants representing four municipalities, the site would not only divert these materials from landfills, but also help eliminate odors and possible contamination resulting from various land application operations in the area.

While environmental objectives were the impetus for the project, it was also important that the LCCF would be a cost-effective investment for the county. It was determined that windrow composting could be used to produce Class AA compost, which could either be used by the county or sold to residents. Today, orange producers and other agricultural interests account for 85-percent of compost sales, and demand for additional material has continued to grow.

Construction of the original facilities also had cost-effectiveness in mind. Six fabric-covered buildings were erected to assist with primary composting. Featuring a metal frame with a tension fabric roof, the structures were deemed compatible with the application for a variety of reasons. One key advantage is that the translucent fabric allows light to enter the building through the roof, saving energy costs by eliminating the need for artificial lighting during daylight hours.

Engineers planning the site liked that the buildings were lightweight in comparison to metal building options, even though the foundations were built oversized to meet applicable hurricane wind load codes. The structures were left open on the sidewalls (clearance height of 15 feet) and end walls (18-foot clearance) to allow various machines to enter and exit, as well to allow air movement throughout. Two 12-foot-diameter fans were also included in each building to assist with circulation.

As a critical first stage in the composting operation, the fabric buildings provide shelter from the sun and rain so that the initial composting process can proceed consistently without adverse weather effects. Materials spend roughly 30 days under cover, protected from precipitation during the wet season and from excessive sunlight during the dry season.

The project was able to adapt to some early challenges both during and after construction. The initial equipment considered to make windrows could only produce piles four feet high and 10 feet wide, which would have given each building a capacity of 500 cubic yards of compost. A larger windrow turner was procured instead, making piles eight feet high and 16 feet wide, increasing the capacity to 1,700 cubic yards per building. Additionally, it was quickly discovered that, to ensure quality control, the finished product should also be stored under cover, and one of the six buildings was later converted to a storage structure.

A much larger adjustment came to fruition in 2014, when the LCCF began an expansion project that would allow the site to process almost 100-percent of the biosolids it receives. The expansion plans called for the construction of three additional fabric buildings and added another 10 acres for compost curing. With the arrival of the new buildings and other site improvements that relieved two previous buildings from non-production uses, the overall production capacity would just about double. Legacy Building Solutions (South Haven, MN) won the award for the new fabric structures.

“The new buildings are nearly identical in size to the original structures,” said Jerry Pinder, project manager and engineer for Thalle Construction, the general contractor on the expansion job. “The biggest challenge was with the site itself. The county didn’t want to change an existing parking lot that slopes at 1-percent. And they wanted to place footers for the new building in an existing clay backfill area, which is under the water table. Unsuitable material needed to be removed, and a dewatering system and about a foot of gravel had to be added.”

The poor soil conditions and the need for a total redesign of the foundations had contributed to the original six fabric buildings taking about four months to get through the engineering submittal process. According to Pinder, Legacy was one of only two bidders for the three new buildings at the unfriendly construction site. Under the terms of the project, Legacy was responsible for not only the design of the buildings, but also the foundations. After studying the site and using lasers to ensure precise specifications, Legacy’s engineering team delivered a design that ensured the buildings would be perfectly level by adjusting the heights of the cast-in-place concrete pier foundations at every single column. “The design was flawless,” said Pinder. “It was an engineer’s dream as far as getting through the submittal process, which took less than a month. Legacy’s response time was basically immediate. It was about as good as it gets.”

The three new fabric buildings each measure 162 by 120 feet, though it’s readily apparent from both outside and inside that the metal frame differs from the original structures. Unlike the web truss frame design that’s traditionally been used for fabric building construction, the Legacy buildings use a rigid-frame engineering concept where the fabric exterior is applied to steel I-beams, which can be customized for specific building sizes, uses and added features much more easily than typical tension fabric structures.

Among the advantages of this building design are straight sidewalls, rather than a curved truss that inadvertently creates some unusable space along the walls. “There is better clearance with the Legacy buildings,” said Pinder. “You can drive a loader pretty much right up against the walls and still have room to maneuver. The other structures aren’t built that way. There’s probably about six to eight feet of space on the sides that are not accessible with a loader because the trusses are in the way.”

Legacy’s method for attaching fabric panels was another benefit toward faster project completion. LCCF’s original six buildings each had just one large fabric sheet for the roof, which required several strap-like connections to attach to the web truss frame. The sheer size of the single piece of fabric made it difficult to secure properly, and work simply couldn’t be performed when the roof was moving during windy days. According to Pinder, installing those original roofs took four- to five-times longer than it did for the in-house installation crew at Legacy, which always applies its roofs in 20-foot-wide sections. These individual, kedered fabric panels are far more manageable in any conditions, helping to ensure proper tensioning of the 28-ounce PVC-PVDF fire-rated fabric.

The stronger, solid frame design of the new buildings provides greater wind resistance than the original buildings, allowing them to withstand ultimate wind speeds of 150 miles per hour. They also meet seismic “A” and standard hazard design codes. All steel members were hot dip galvanized for added protection from corrosive elements inside the structures. The steel trusses support 380 pounds of ceiling fans, and ventilation was aided by the inclusion of four Schaefer RV-3000 ridge vents. “Legacy’s crew was extremely professional,” said Pinder. “They met all our safety requirements and did an excellent job. They even provided an extensive final completion checklist with pictures of each item. That was very impressive, and it really demonstrated the level of workmanship they expected of themselves.”

The three new fabric structures were completed in October 2014, beating the initially scheduled completion date by a few weeks and giving Thalle Construction ample time to pave the ground surface inside the buildings before they became operational in December. Lee County has already achieved many of the initial goals for the LCCF due to proper planning and execution. Enlisting Legacy to tackle the challenge of planning and constructing new buildings as part of its expansion project turned out to be another wise decision on the path to continued success for the facility.

Mike Crummy is a technical writer with The Promersberger Company in Fargo, ND. Legacy Building Solutions specializes in the innovative design, engineering and construction of fabric-covered buildings. For more information, visit www.legacybuildingsolutions.com. 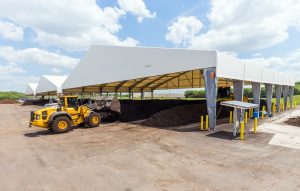 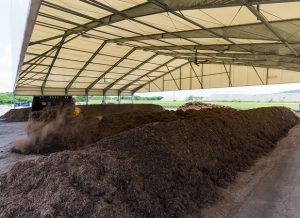 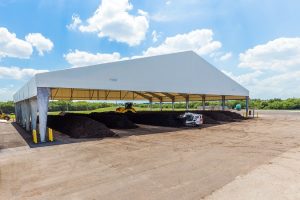