Since 1999, a large, County-owned and operated landfill in Maryland has been collecting and flaring its landfill gas. Over time, the area around the landfill has become increasingly developed with new homes. In 2011, the County proposed what it thought would be a welcomed upgrade. In particular, the County proposed to install a small engine that would be powered by combusting the landfill gas, thus generating electricity and reducing flare emissions.

However, a small group of neighbors expressed concern that the project would adversely affect air quality and, as a result, their health. In particular, they read an article posted by the Energy Justice Network (www.energyjustice.net/lfg#4) indicating that combustion of landfill gas generates “compounds such as dioxins and furans, the most toxic chemicals ever studied.” The article also mentioned, “toxic chemicals like benzene, toluene, chloroform, vinyl chloride, carbon tetrachloride, and 1,1,1-trichloroethane.”

The neighbors were aware that the landfill gas engine project had received Maryland Department of the Environment approval, but they were not convinced that this approval-process was sufficiently protective—especially since none of these chemicals of concern were specifically listed or regulated.

As consultants to the County, we were asked to evaluate and address the neighbors’ concerns. Accordingly, we designed and conducted a progressive program of air quality modeling, health risk assessment, emissions testing, and updated assessments based on that testing. All of us learned important lessons as a result of this program. The details are as follows.

Initial Evaluation
We began by estimating rates of emissions of PCDD/Fs and other pollutants of potential toxicologic concern from two sources: the existing flare, and the soon-to-be constructed engine. Emissions from the flare had not been tested directly, but the incoming gas had been tested and analyzed, and we used a combination of that test data, plus data from an update to U.S. EPA’s AP42 emission factor database (2008), to estimate emission-rates for most pollutants. In particular, we assumed, conservatively, 86 percent destruction by combustion of the 24 chemicals detected in the landfill’s gas, plus more than 100 others identified by the U.S. EPA at other landfills, and assumed the residual levels were emitted to the atmosphere by the flare and the engine. (Many of these other chemicals, however, such as simple alkanes, are not known or reasonably expected to be toxic at relevant concentrations, and so were excluded from the health risk assessment portion of our analysis). With regard to PCDD/Fs, estimates of emission-rates were derived from combustion exhaust flow rates and the mean levels of PCDD/Fs detected in stack testing of flares and landfill gas engines, as reported by Caponi et al. (1998).

We then performed air dispersion modeling, using the U.S. EPA model SCREEN3, in order to translate these emission-rates into estimates of incremental impacts to ambient air. Our dispersion modeling focused on nearest residential locations, and we compared the predicted, long-term, worst-case impacts at these residences to concentrations considered to be harmless.
The values that we selected as harmless concentrations were based on toxicological benchmarks established by the U.S. EPA and other groups of health scientists, as compiled in the Risk Assessment Information System (RAIS), maintained by the Oak Ridge National Laboratory (ORNL) (http://rais.ornl.gov).

Following standard, health risk assessment methods, for chemicals known or suspected to cause cancer at sufficiently large concentrations, the harmless concentration (HC) was based on: (i) the State of Maryland’s de minimis incremental cancer risk-limit of 10 in one million; (ii) an assumed exposure for a resident of 30 years of a 70 year lifetime; and (iii) the chemical’s inhalation unit risk factor (UR, in units of m3/µg):

For chemicals not known or suspected to cause cancer, but known to cause other health effects at sufficiently large concentrations, the HC was chosen as the inhalation reference concentration (RfC) from the RAIS database for the longest available averaging period (in order of preference: chronic, sub-chronic, short-term, and acute). If, for any given chemical of concern, HC values were available for both cancer and “non-cancer” health effects, the lower (that is, the more health-protective) of the two values was used.

For chemicals for which RfC’s have not been estimated, but for which reference doses (RfD’s; essentially, acceptable daily intakes) have been derived, we used the latter to generate an HC using the formula:
with a typical adult body weight (BW) of 70 kg and an inhalation rate (IR) of 20 m3/d.

Initial Results
The results of our initial evaluation indicated that impacts from the existing flare and proposed engine were quite small, and well within harmless ranges. These results, for volatile organic compounds (VOCs) and hydrogen sulfide, are tabulated in Table 1. (Compounds for which toxicologic benchmarks are not available are not listed).

For PCDD/Fs, following convention, we expressed our estimated dose as “toxic equivalents” (TEQs) relative to the most toxic PCDD/F, which is 2,3,7,8-tetraclorodibenzo-p-dioxin. Our analysis indicated that impacts at the nearest residence could result in an incremental, inhaled dose of 0.0003 picograms of TEQ per kilogram body weight per day (pg/kg-day). This dose is much smaller than U.S. EPA’s RfD—which is 0.7 pg TEQ/kg-day (U.S. EPA, IRIS record, www.epa.gov/iris/subst/1024.htm#oralrfd )—and so should be considered to be safe.

We presented these results, and related information about the chemicals at issue, at a lively public meeting. Although there was general acceptance of our findings, it was also recognized that our assessment was based on emission-rates that were estimated, rather than on actual stack tests of the flare; and, of course, that there were no measurements from the engine that had yet to be installed. Accordingly, the public requested that the County perform actual stack tests of both sources, and that our analysis be re-run using data from those future tests. The County agreed.

Subsequent Tests and Results
Stack testing of the flare was performed prior to the installation of the proposed engine. We re-evaluated impacts to ambient air based on these data and found that impacts remained inconsequential. For all but one pollutant, measured emission rates were smaller than the emission rates that we had estimated prior to testing.

Additional samples of the Jenbacher engine exhaust were collected after the initial six months of operation. Test results were generally similar to previous testing of the engine, although most pollutants were detected at somewhat (on the order of ten-times) higher concentrations. In particular, the stack gas concentration of PCDD/Fs was 7.9 pg/m3. Such variability is not unexpected, and may or may not indicate slightly decreased combustion efficiency. Indeed, subsequent combustion tests indicated increased stack gas concentrations of carbon monoxide (CO) and nitrogen oxides (NOx), and so signaled decreased combustion efficiencies. Although the modeled maximum impacts to neighborhood air from all chemicals continued to remain well within safe limits, these variable test results prompted additional questions from concerned citizens, and additional responses on the part of the County.

Lessons Learned
Population pressures and other factors may increasingly bring residents and landfills in relatively close contact. This, plus an abundance of information and commentary available online, may make neighbors suspicious of activities that once went unnoticed. In this case, neighbors were unwilling to assume that a State permit equated to safe operations, and were unwilling to fully accept models based on data from facilities other than the one in their own neighborhood. The County spent more time and money than it had planned to evaluate this project; but in the end, open and thorough communications with neighbors led to a consensus that the project was not a health-threat. Moreover, the testing indicated that periodic adjustments to the landfill gas engine were needed to maintain combustion efficiency.

Laura C. Green, Ph.D., D.A.B.T., is Vice President for Environmental Health and Toxicology with CDM Smith, Inc. Since the late 1970s, Dr. Green has performed original research, published, and consulted in the areas of chemical carcinogenesis, analytical chemistry, food chemistry, toxicology, pharmacology, epidemiology, health risk assessment, and regulatory policy. She has directed or otherwise worked on scores of quantitative health risk assessment projects, specializing on chemical, toxicological, and epidemiological aspects. Dr. Green has participated in numerous public meetings and regulatory hearings with regard to air pollutants, water pollutants, and many other aspects of environmental and occupational health and safety. She can be reached at (617) 452-6079 or via e-mail at GreenL@CDMSmith.com.

Neil Peters, P.E., is Vice President for Maryland Operations with ARM Group Inc. (Columbia, MD). He has more than 32 years of experience managing and performing multi-disciplined environmental projects with an emphasis on industrial and solid waste management and hazardous waste site remediation. He has directed a wide variety of environmental projects including environmental due diligence, facility siting and permitting, compliance auditing and environmental management system development. Neil can be reached at (410) 290-7775 or via e-mail at NPeters@ARMGroup.net. 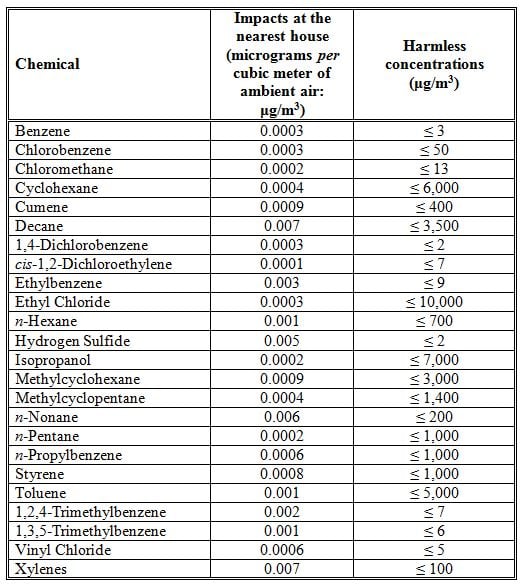 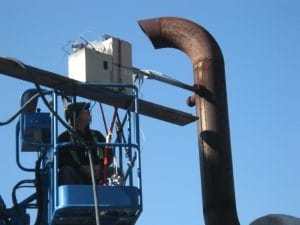 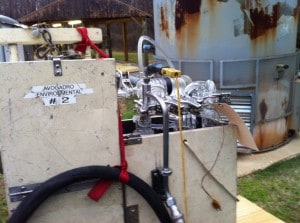 Emissions testing from the Jenbacher 320 Engine and flare at the County landfill.

Waste Collector Safety: Can Tools from Other Industries Help?

Waste Haulers Get on Board with On-Board Weighing

ISRI Lauds the U.S. Mexico Canada Agreement as It Enters Into Force

Medical Bins: Where Do I Begin?