Do not simply focus on equity as an analytical/intellectual/theoretical “head only” concept. Take it down to the “heart” level with the ultimate goal of taking issues around equity to the “hands” level of implementation.
By David Nightingale, CHMM, S.C.

Equity is something that the skeptical part of this audience may characterize as the current buzz word or liberal  issue du jour. Often, it is found within the three-word phrase “diversity, equity and inclusion”, or DEI. I was skeptical when these phrases started becoming more prevalent in my workspace and in the media. At first, it was difficult for me to get past taking it personally when being told that being “not racist” was not enough and may even be harmful.

What ultimately helped me get beyond that and understand the  importance of approaching my work to include an equity lens was seeing how these concepts translate in practice. This was reinforced when attending the recent 2021 NAHMMA (North American Hazardous Materials Management Association, nahmma.org) virtual conference, which had a number of sessions that included an equity focus.

While attending a session at the 36th Annual NAHMMA conference, the audience and I were prompted to put our personal reflections and experiences of bias and discrimination into action—to not simply focus on equity as an analytical/intellectual/theoretical “head only” concept. Take equity to the next level, bring it down to the “heart” level with the ultimate goal of taking issues around equity to the “hands” level of implementation. That was helpful and resonated with me. Let’s make this more than a theory, let’s make it practical and real.

A Feasibility Study
In some recent consulting work, I was given an opportunity to do just that. The Champaign County Environmental Stewards (CCES) asked Special Waste Associates to develop a feasibility study for a permanent HHW collection facility to serve Champaign County, IL and surrounding communities. This project was not in itself unusual, but it incorporated the results of a survey performed by CCES during and after the county’s most recent one-day HHW collection event, which included an equity lens. They asked participants to provide more than just their zip code or show their driver’s license. 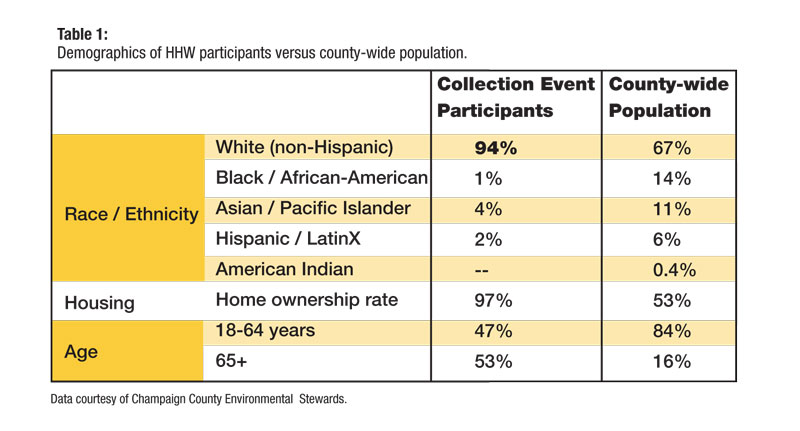 Non-hispanic white and homeowner populations represent slight majorities in the county at 67 percent and 53 percent respectively. However, their contributions to this survey outpaced their portions of the population by wide margins—94 percent and 97 percent respectively. Therefore, the collection event unintentionally missed  reaching large swaths of the general population, 33 percent of which were other races/ethnicities and 47 percent of the population that were not homeowners. Of course, this was not the intent or design of the HHW collection activity; it was open and available to all in Champaign County and the surrounding region.

To be clear, discrepancies between the survey respondents and the general population are not the same as discrimination or prejudice. For example, cleaning supplies, paints and other hazardous products to maintain rental properties are mostly managed by building staff as opposed to tenants. Therefore, renters (non-homeowners) may simply not have as much need for HHW services as homeowners. However, insofar as homeownership can be used as a proxy for household
income/wealth, this discrepancy may point to a functional lack of access—or a need for more focused outreach—to less affluent communities.

Areas for Continuous Improvement
Similar logic can be used in examining the gaps shown in survey data for race/ethnicity and age. The existence of disproportionality in the surveyed population shows that there is potential for blind spots if the demographic questions were not asked. Blind spots can skew our understanding of needed or preferred services and point to areas for continuous improvement in HHW outreach programs.

This disproportionate service delivery would not have been brought to light without the inclusion of a few demographic questions in the CCES survey. Now, the county can proceed with a better understanding of the limitations revealed by the survey results, and explore ways to reach the under-represented groups in future planning and program development process.

I credit the CCES team with the foresight to include demographic questions in their HHW survey. This experience has given me a fresh look at some of the program delivery equity issues and provides direction for positive measures to implement more equitable programs. | WA

To read more on HHW>