Companies face the challenge of complying with government regulations and internal policies and procedures. Government regulations frequently change and are complex. Lack of compliance causes significant regulatory fines, lost productivity, bad publicity, increased workers compensation costs and loss of business. Adding to the challenge are union bargaining agreements, which are often long-term and restrictive with respect to defining job responsibilities and duties. Remaining compliant often requires changes in job responsibilities and duties, which results in conflicts from labor. Behavioral safety training with documentation is inconsistent in the solid waste industry.

High hazard, waste management and related industries experienced an increase in OSHA and EPA penalties related to the increase in safety violations. A few examples of penalties include:

The solid waste management industry provides a vital public service that ensures the health safety of citizens across the U.S. and the globe. Due to technology and advances in automated equipment, the waste-to-energy market has grown from $43 billion in 2001 to $52 billion in 2009 in the U.S. alone.

As this industry continues to grow, so does the need for more sophistication in tracking tasks and observations pertaining to companies’ compliance. Software products to enable field supervisors to document their compliance in a simple, easy-to-use manner would be a solution. The key for staying compliant is managing the documentation requirements at all levels.

By creating user-friendly tools that have already proven to be an integral component of their clients’ businesses, customers have seen a dramatic (up to 95 percent) reduction in workers compensation claims and reserves and up to 50 percent credits in workers compensation premiums from insurance carriers. One client saw a reduction from $1,200,000 premiums to less than $400,000 in just two years through use of Omnis’ methodology and tools. In California, premiums for the solid waste industry have increased 20 to 30 percent since January 2008, making the company’s results even more effective.

The following are actual results and comments from two beta customers in the waste management industry (both with hourly employees that are unionized), including the percentage reduction in worker’s compensation expenses (claims, reserves and premiums combined) after using Omnis’ software.

Customer A was always facing a strike and communications between employees and management was broken, resulting in low morale. The drivers would not wear company uniforms, rather they were dressed in black beanie caps, torn t-shirts, shorts and unsafe shoes. Fifty percent (40 out of 80) of drivers per day were abusing the system by calling in sick and the company was paying a large amount of money in overtime. While the company experience modifier5 was more than 140, workers comp claims were averaging 69 to 90 per year ($1.2 million annually), insurance premiums were more than $1.2 million dollars per year and the internal operations were broken—most of the time supervisors were in fear of their lives.

After looking for a risk management tool that would help them get things under control, Customer A settled on Omnis’ software because of its ease of use with documentation behavior safety tracking which produced immediate results. Now, three years later company communications between supervisors and employees are working and improved, morale is up and overtime is down 90 percent. Not only that, but drivers are wearing uniforms and their safety protection equipment, workers comp claims have significantly decreased (averaging eight to nine per year—$12,500 annually) and insurance premiums average $400,000 (even though premiums in the industry went up within the three years). The company experience modifier is now 88 and only two to three drivers call in sick per day.

In a recent union meeting between union management and company management, the union complained that: “The biggest complaint they had was that they were not getting enough complaints from the drivers.” The owners of Customer A left the meeting saying: “We are finally in control.”

In addition, a recent Request for Proposal (RFP) for another city contract came under review. The city interviewed the union and asked them which company/management did the union prefer to work with? The union was very clear that they worked well with Customer A compared to any other company wanting the contract. This, was a big factor in the city granting Customer A the contract.

Customer B was always in grievance hearings because communications between employees and management was broken and morale was low. Training drivers was difficult—they would complain about it affecting their work time during the day and would fight any request made by supervisors to do a task regardless if it would help customer relationships. Twenty out of 50 drivers were calling in sick per day, the company was paying a large amount of money in overtime and the company experience modifier was more than 140. In addition, workers comp claims were averaging 36 to 42 per year ($900,000+ annually) and insurance premiums were more than $1,200,000 per year. Internal operations were broken and, as a result, supervisors were protecting their own turf and not working together. According to the workers compensation HR manager for Customer B, “I was pulling my hair out and constantly fighting with the union on bogus claims and fraud by employees who want to milk the system … I had no recourse or tools … I was on my own.”

Wanting to get their company under control, Customer B looked at the products available in the industry that would help them manage situations like the ones they were experiencing. Deciding on Omnis Tools because of the behavioral training and simple online software, Customer B’s “atmosphere now is more of a team approach as opposed for each man for himself,” says the operations manager at Customer B. Communications and morale between supervisors and employees are working and improved, grievance hearings are down by 50 percent and overtime is down by 90 percent. Supervisors are working together and not against each other. In a recent driver’s training class at 5:00 AM (one hour prior to start time) in freezing cold weather with pouring rain, drivers were very enthusiastic about the class. Managers’ were impressed with the drivers’ positive attitude in such difficult weather conditions. “A year ago this training would have never occurred, and if it had, we would have had a union representative fighting us to cancel the class in spite of the fact that the drivers do need to be trained under all conditions, since they work under all conditions,” expressed a supervisor for Customer B.

In addition, the company experience modifier is now 88, it averages two to three drivers calling in sick per day, workers comp claims average eight to nine per year ($19,500 annually) and insurance premiums average $400,000. Now, the workers compensation HR manager at Customer B is more positive, “I no longer feel that I am alone. We have a tool that supports the drivers and supervisors. It supports everyone. It is a ‘win win’ situation. With Omnis software, employees are feeling the love and drivers are thriving to receive positive reinforcement. They no longer feel we are trying to ‘get them.’ They don’t want to attend grievance hearings. When they are at fault, they come to management and say I am at fault. We don’t need a hearing. They like their job.“

Customer B’s president agrees, “We are now going after more RFPs since we are confident that we have the operations and the business of company under control. We just received an extension from the city on our contract.”

Omnis Tools helped the customers to align their process and procedures to comply with regulatory requirements and trained supervisors to implement the procedures using adult learning techniques. The supervisors then used the Omnis Tools, Inc. website to document their observations of and conversations with employees regarding the learning objectives. They also used our simple checklists to verify activities were accomplished.

The flexible web-based reports helped the supervisors and management identify trends and develop a proactive approach to improvements and minimizing incidents (see Figure 1). The reports available from Omnis’ tool have become exceptionally valuable to clients. Customers have even started requiring reports from their software tool on a routine basis to ensure clients are driving appropriate behavior and culture in their companies. Additionally, reports from their tool have enabled one client to extend their contract this year, to 2022, which is virtually unheard of in the waste management industry (see Figure 2).

“As companies grow and expand, communications among all levels of employees begins to suffer, employees become territorial, efficiency is down and morale is low, resulting in an increase in WC claims and increased in overall costs. Omnis goes back to the basics and starts with the human element within every organization. It is most satisfying to see the changes that can occur within an organization once communication and efficiency is improved.” Tammy Gaw, President and CEO Omnis Tools, Inc.

Roger Gaw istheDirector of Marketingfor Omnis Tools, Inc. (Sunnyvale, CA). Previously, he was the President of BC Consultancy, a marketing and public relations firm. Roger has an extensive 25 years advertising sales management media background with such high tech titles as EETimes-Asia/China, Bitpipe, Andover.Net/VA Software, EDN Magazine and Control Engineering. His achievements for consistent exemplary sales achievement included eight Salesmen of the Year, President’s Club and Distinguished Service honors. Roger can be reached at (408) 315-9378 or (408) 245-6600, via e-mail at rgaw@omnisrisk.com or visit www.OmnisTools.com. 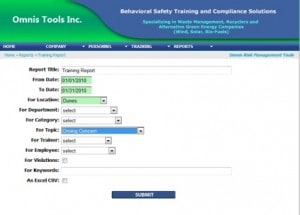 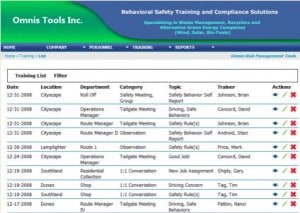 You may also like: Experience Modification Rate & How to Lower Workers’ Comp Costs

Putting the Puzzle Together: Modernizing a Dumpster Operation Through Software