By combining a two-stage approach to emissions control, compliance with strict emissions limits can be achieved on a much more cost-effective way as compared with traditional mass-burn technologies.

Gasification is the process of converting solid fuel feedstocks into combustible gas at high temperatures, typically between 1,400 and 2,000 degrees Fahrenheit. Direct gasification systems use the heat from exothermic partial combustion of the feedstock (typically 15 to 25 percent of the air that would be required for complete combustion) to drive the endothermic pyrolysis reactions that produce the combustible gas. When the system is fed with air, the combustible gas is referred to as “producer gas” and when the system is fed with oxygen it is called “syngas.” The combustible components of the producer gas include carbon monoxide, hydrogen, methane and lighter hydrocarbons, as well as heavier hydrocarbons that go by the unfortunate name “tars.” Pyrolysis produces larger amounts of char and liquid products (sometimes called pyrolysis oil or “tars”) than gasification, which produces mostly gaseous products and smaller amount of “tars.” These “tars” have heating value and as such are a valuable portion of the producer gas; however, if an effective strategy in the gasification process is not employed to manage them, they can be very problematic indeed. Direct gasification is therefore a combination of combustion and pyrolysis, with enough air provided to make the system self-sustaining. Since the conversion is performed with a limited amount of air, not all the carbon in the feedstock is converted to gaseous products. This unconverted carbon and the inorganic materials in the feedstock are a produced byproduct of the process known as char-ash.

A gasification system to convert RDF into producer gas is shown in Figure 1. It operates at pressure, and uses a lock-hopper system to feed the RDF into the gasification reactor. A bed of sand acts as a heat sink or “thermal flywheel” to enhance the thermal stability of operation. Air is fed to this bed of sand from the bottom, at a rate high enough to unlock the sand particles from one another so they act like a liquid or fluid (thus the term fluidized bed). Inside the reactor, solid fuels are converted to a combustible gas and this gas, along with unconverted carbon and ash, leave the top of the reactor at high temperature. This hot, dusty gas is cooled and filtered to remove the char-ash as a byproduct. The cleaned gas is then ready for use as a fuel for the energy production system, typically a boiler to produce steam to drive a steam turbine or for other thermal applications.

The advantage of choosing waste streams for projects is the lower value of these streams, which typically translates into a low-cost, zero cost or even negative cost feedstock. A negative cost means that the tipping fees that are paid to the project entity are sufficient to pay for any upstream handling and transportation of the feedstock from receipt to the feeding of that feedstock to the conversion unit. The lower capital costs and higher efficiencies of gasification (see following section – Why Gasification?) as compared to combustion may translate into lower tipping fee requirements in order to make the project economically viable.

Gasification technologies based on fluidized beds are the most scalable technologies, and are also very fuel flexible, in terms of particle size and shape. They may be built to handle up to 50 MWe scales in a single reactor, in pressurized designs. By contrast, gasification technologies based on fixed bed designs, the so-called updraft and downdraft designs, are usually not capable of scales larger than 1 to 3 MWe due to flow distribution issues like channeling and bed bypassing at larger scales. For effective project economics, larger systems allow economies of scale to be captured, so that the fluidized bed designs will be favored for these larger systems.

Certain inorganic constituents in refuse-derived fuels, namely alkali metals (sodium and potassium), volatile heavy metals (lead, arsenic, mercury, cadmium) and chlorine, along with compounds containing sulfur and nitrogen, can all cause serious issues for combustion-based incineration systems that operate on them. Pre-sorting of municipal solid waste can eliminate much of the volatile heavy metals and chlorine (mostly from PVC plastics), but definitely not all. Therefore, extensive back-end emissions control systems must be employed to meet emissions regulations with combustion-based or so-called mass-burn W2E. These systems combine many unit operations of equipment such as baghouses, wet scrubbers with caustic and/or lime injection, powdered activated carbon injection for heavy metals control, and wet electrostatic precipitators (WESP) for fine particulate control. Since the high levels of chlorine in the RDF feedstock largely converts to hydrochloric acid gas during combustion, this means that the boiler itself must be designed to handle this very corrosive material. This leads to the employment of expensive alloys and reduced maximum temperature specifications on steam tubes. The reduced maximum temperature specifications require operation with large excess air requirements, in the range of (60 to 100 percent). All of that excess air must be treated by emissions control equipment in a post-combustion approach. These factors taken together result in high capital costs and low efficiencies of these mass-burn waste-to-energy systems. These projects generally come in at $7,000 to $10,000 per kW of electric generation capacity, and have generation efficiencies in the range of 15 to 18 percent. Despite its high cost and low efficiency, this type of technology is the most common approach to waste-to-energy in the United States.

In contrast, a gasification system similar to the one shown in Figure 1 converts the RDF feedstock into a combustible gas, and this allows a window of opportunity to do “front-end” clean-up and removal of the bad actors that would cause corrosion and emissions concerns in a boiler (see Figure 2). Since the powdered ash and unconverted carbon is in intimate contact with the gas as it cools, capture of heavy metals is achieved without the addition of expensive activated carbon. Inexpensive limestone sorbent addition to the reactor results in more than 90 percent capture of sulfur and more than 95 percent capture of chlorine in solid form that is filtered in a high-efficiency filter, capable of reducing particulate matter (PM) to very low levels. All this is done prior to combustion, where the gas volumes to be treated are much smaller than the back-end approach to emissions control. This has the added benefit of keeping the ash and chlorine out of the boiler, which eliminates corrosion issues. The result is that the steam generator boiler design can now be a low-cost, high-efficiency package boiler, operating at low excess air requirements (10 to 15 percent versus 60 to 100 percent for mass-burn MSW combustion), and these boilers can be made from low cost carbon steel metallurgy. The absence of alkali metals and chlorine also allows more severe steam conditions to be employed in the boiler, for example steam pressures up to 1550 psig and temperatures up to 1,000 Fahrenheit, greatly enhancing electric generation efficiency.

Many states have passed renewable portfolio standards (RPS) requiring utilities to generate or purchase a certain percentage of renewable electricity for their portfolio. Many, but not all of these recognize municipal solid waste as renewable under these standards. Some municipalities have independently made their own renewable goals, and made their own decisions as to whether MSW is renewable. The federal government, through the American Recovery and Reinvestment Act of 2009 (the so-called stimulus act) created a cash grant in lieu of the investment tax credit (ITC) for renewable electric projects and recognized MSW as renewable under that program. The bottom line is a project developer needs to investigate the applicability of MSW-derived feedstocks and their classification under the standards having jurisdiction, and the impact on the project acceptance and economics.

In typical solid waste combustion, the incineration device is also the steam generation device. Therefore, when problems are encountered in the furnace, this shuts down power generation. By contrast, most gasification units decouple the thermal conversion from the steam generation equipment. This means that electricity generation can continue on alternative fuels like natural gas while any issues in the gasifier are resolved. If generation availability is part of the power purchase agreement, this decoupling greatly enhances the availability of the unit and the reliability of the electric generation capability. Additionally, since the steam generator is not faced with internal moving parts, corrosion, fouling and slagging issues from dirty solid fuels combustion, it will be inherently more reliable. The monetary value of this enhanced generation reliability to a project can be substantial.

There are several companies that offer gasification technology in this space. Some of the key questions that need to be asked when comparing these technologies are: What is the expected emissions profile? What is the expected efficiency performance in terms of tons of RDF or MSW per MWh of electricity produced? How will the gasifier integrate into the overall project? How many gasification reactors will be required? What does the gas cleanup technology look like? What types of back-end emissions controls are needed? What are the consumables (e.g. baghouse bags, bed media, sorbents, caustic, ammonia, etc.)? What is the tar management approach? What labor requirements are needed? What is the physical size of the unit and how much space will be required? What is the scope of supply? What support is available after the unit is built? Getting these questions answered by all of the proposed technology providers is key to developing an understanding of what is involved and how the technology provider approaches and supports these issues.

Gasification of refuse-derived fuels provides a clear and compelling advantage in cost and performance, while meeting the strict emissions limits that are imposed. By combining a two-stage approach to emissions control, compliance with strict emissions limits can be achieved on a much more cost-effective way as compared with traditional mass-burn technologies. Gasification technologies based on fluidized beds are very scalable and can provide the basis for waste-to-energy plants larger than 20 MW in scale, in a single gasification reactor.

Dr. Thomas Paskach is Director of Business Development for Frontline BioEnergy, LLC (Ames, IA).Dr. Paskach is responsible for developing Frontline’s techno-economic models for gasification and power systems, process development and design, and technical support. Dr. Paskach received his Ph.D. in chemical engineering from Iowa State University in 2002. Frontline BioEnergy designs gasification systems for conversion of solid waste materials and biomass to energy. Dr. Paskach can be reached at (515) 292-1200 x121 or via e-mail at [email protected]. 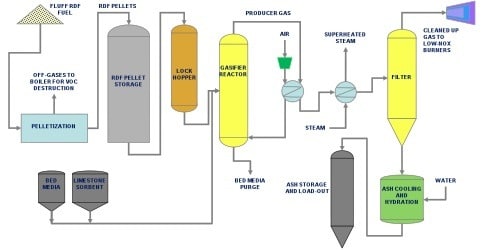