ecomaine provides comprehensive long-term solid waste solutions in a safe, environmentally responsible, economically sound manner for approximately 400,000 people in Maine. The Portland-based organization is a municipally owned not-for-profit, and operates a single-sort recycling facility, a waste-to-energy (WTE) power plant, a landfill for the ash from the WTE process and a robust educational outreach program, designed to raise public awareness of its sustainable waste management strategies.

In December 2017, ecomaine’s material recovery facility (MRF) encountered a fire on its tipping floor, sparked by an improperly discarded lithium ion battery. Staff responded quickly by back dragging the affected area and attending to the small blaze with fire extinguishers until the Portland Fire Department arrived, but the situation pointed to a gap in ecomaine’s safety and fire response protocols.
Though no staff were injured, and the fire was contained before spreading beyond a small area of the tipping floor, the damage clearly could have been much worse. This event left an impression on ecomaine’s leadership, culminating in the decision by management and the Board of Directors to pursue a safer alternative.

The Right Tools for the Job
As any MRF operator knows, a spark of any kind in an environment filled with paper and cardboard is a risk too great to take. Enormous fires have taken facilities offline across the country each year. With this in mind, ecomaine began its research into fire suppression controls.
ecomaine’s primary consideration is the safety and health of its employees—dozens of whom are at work in the MRF for 10 hours each day, Monday through Friday. However, overnights and weekends presented challenges beyond employee health and safety—namely, insurance costs and, most notably, the ability for ecomaine to operate and process 40,000 tons of recycling annually for its member communities. Southern and coastal Maine’s investment in single-sort recycling was at stake.
ecomaine identified the critical areas and features that a fire suppression system would need to have for its operations:
• Observation: Installation of thermal camera technology in all high-risk areas to improve coverage for early warning detection
• Notification: The ability to set temperature thresholds that will alarm staff at any time
• Response: Ability of staff to view and respond with inspections, water cannons and/or trigger deluge systems
• Safety: Most importantly, staff can respond remotely and safely

The relatively unique nature of ecomaine’s MRF, being accompanied by a continually operating WTE plant, allowed for 24/7, onsite monitoring of any implemented system. Through an RFP process, ecomaine vetted two companies, and selected Johnson Controls—in part due to Johnson Controls’ existing alarm systems at ecomaine’s facilities.

Johnson Controls aims to optimize building performance to improving safety and enhancing comfort through a full range of systems and digital solutions. Dedicated to protecting the environment, Johnson works with a variety of industries such as healthcare, education, data centers and manufacturing.
Over the course of 2018 to 2019, ecomaine and Johnson Controls engaged in a series of site visits, planning and testing to implement a network of thermal cameras on targeted areas, including tipping floors, balers and areas with potentially combustible fiber material.

The thermal cameras complemented a new, wide-angle camera to view the entire MRF tipping floor at once, allowing for safe, remote viewing of both temperature and real-time conditions. (Thermal cameras were also installed in ecomaine’s WTE facility, to ensure combustion of waste happened on their own terms, not the waste’s.)

Temperature thresholds were set, tested and re-set again—finding the right tipping point proved critical, due to the heat of heavy machinery in and around the plant, and balancing those with the need to notice true “hot spots” capable of igniting material in the facility. The cost for the equipment, installation and calibration of the eight new thermal cameras was approximately $148,000. 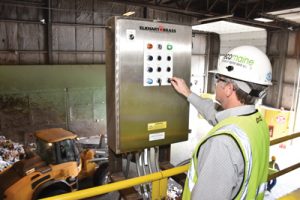 Putting it All Together
The ability to quickly and safely respond to a fire led to the development of controls for a new water cannon over ecomaine’s tipping floor. The cannon would accompany deluge systems and dry chemical automation already in place and would serve as the frontline in ecomaine’s fight against damaging blazes. The cost for the cannon and its installation was approximately $96,000. The Ekhardt water cannon is able to be triggered and controlled in three effective ways:
A control panel directly at the location of the water cannon, above the MRF tipping floor
Via a remote control, approximately the size of a satellite phone, allowing MRF staff to respond from outside the building at a safe distance
From ecomaine’s 24/7 WTE control room, at a panel with all camera views, allowing for response at all times, even when the MRF is not operational

Working with Johnson Controls’ technicians, ecomaine’s own Instrument and Controls technicians were able to put in place the necessary cameras, wiring, and components for the water cannon over the course of the summer of 2019.

“This fire control and prevention system has really made a difference on the risk side,” said Kevin Roche, ecomaine’s CEO. “Our employees, our customers, our first responders and our communities are much safer now that we have this system installed.”

Thankfully, since its installation in 2019, ecomaine has not been required to deploy the fire suppression system. Though the cost of the entire system approached $250,000, the ability to keep employees out of harm’s way while effectively combatting the increasing threat of lithium ion batteries (and other combustible waste) is significant. Although ecomaine hopes to never have to use it, the system increases the safety of staff and the facility in a big way.

As ecomaine’s (Portland, ME) Communications Manager, Matt Grondin is responsible for all communications, outreach and education programs. Previously, Matt held fundraising, writing, and outreach positions at Maine Public Radio & Television, United Way of Greater Portland, and WGBH in Boston, where he was part of the production team that won a 2011-2012 Daytime Emmy Award for its work on Design Squad, a children’s engineering TV production. Matt can be reached at (207) 773-1738 or e-mail grondin@ecomaine.org.

7 Ways the Circular Economy Will Grow in 2021

Curbside Recycling in Columbia, MO Will Resume on a Reduced Basis

Why Inspecting Rail Equipment is Not Just for Railroads: “Boots on the Ground”

Transforming an Existing Property into Your New Facility