Oxidizing agents can be introduced to landfill leachate during wastewater treatment to kill the offending bacteria and reduce odor emissions to zero. Permanganate application successfully controls obnoxious odors that are released when storing and transferring landfill leachate.

Leachate is formed when liquid passes through a landfill and mixes with degraded waste, picking up dissolved and suspended material. This nasty liquid contains organic and inorganic contaminants as well as heavy metals and pathogens.

High levels of odor causing compounds are also found in leachate. The primary odorant is volatile hydrogen sulfide (H2S) which accumulates to very high levels in closed wet wells, junction boxes and pipes of collection systems. Hydrogen sulfide is generated by the conversion of dissolved sulfate by anaerobic bacteria. It has an easily recognizable unpleasant, rotten egg characteristic. It is detected by the human nose at very low threshold levels, but can also desensitize the nose after short-term exposure. Hydrogen sulfide is a dense, heavier-than-air gas and it accumulates in confined spaces.

This means that H2S is a critical safety issue, as well as a nuisance odor compound.  It is acutely toxic when inhaled. Leachate production is a significant concern for municipal solid waste (MSW) landfills and causes substantial odor emissions that have negative health and environmental effects.

Problems arise when an MSW landfill pumps untreated leachate to local sewer authorities. Traditionally, landfill leachate has been discharged to wastewater treatment plants for disposal. However, the odor that occurs often draws criticism from nearby communities as well as wastewater treatment plants on the receiving end due to stricter regulations on effluent discharge.

Many municipal wastewater treatment plants will no longer accept leachate without pretreatment. Some of the chemical-physical landfill leachate treatment options include coagulation/flocculation, oxidation, activated carbon, evaporation and filtration. This article focuses on oxidation to effectively treat landfill leachate.

Oxidizing agents can be introduced to landfill leachate during wastewater treatment to kill the offending bacteria and reduce odor emissions to zero. In the cases described in this article, oxidizers such as hydrogen peroxide and chlorine were tested but not suitable for elimination of the offending odor. However, permanganate application successfully controlled obnoxious odors that were released when storing and transferring landfill leachate.

When sodium permanganate is injected into leachate, in minutes, it reacts with dissolved hydrogen sulfide, reducing odor emissions to zero.

A landfill in the Northeastern U.S. operates one open cell and accepts construction and demolition waste, including wall board. Numerous neighbor complaints about odors associated with the pumping and transferring of leachate to the local municipality were received.  In particular, odors were being released at the connection with and within a municipal sanitary sewer collection system, downstream of the landfill property.

Leachate is not always flowing. The system runs intermittently as leachate collects in the wet well beneath the open cell. When operating, the leachate flowrate is estimated to be about 32 gallons/minute. Typically, the leachate is pumped two days per week for six to eight hours each day.

The leachate collection area is the low point at the site. A pump station lifts the leachate through a 4-inch pipeline that subsequently discharges into a gravity pipeline.  At this forced flow-to-gravity flow transition point, there is a junction box that can be monitored for atmospheric H2S.  H2S is released into the air at points of turbulence in the pipeline.

H2S levels were measured using an OdaLog® sulfide monitor to determine treatment effectiveness.  The analyzer was suspended in the headspace of a manhole located several feet downstream of the force main discharge point. Without treatment, more than 1,000 ppm H2S accumulated in the small, confined headspace.  The actual amount could not be measured because it exceeded the upper limit of the analyzer.

The environmental staff at the site initially selected 35 percent hydrogen peroxide as the treatment option. Although convenient to feed, it was not fully effective. Even at application rates of 10 to 15 gallons per hour, the peroxide treatment was unable to control the sulfide emissions. In separate tests, sodium hypochlorite bleach was also fed, at 15 to 20 gallons per hour, with similarly poor results.

As an alternative to chlorine and peroxide, the plant staff began feeding permanganate solution to determine its effectiveness. The junction box, where peroxide was previously added, was used for the permanganate feed point.  Over several days different feed rates were tested ranging from 0 gallons per hour (base-line conditions) to 5 gallons per hour. H2S levels that ran as high as 1300 ppm without treatment were lowered to less than 10 ppm in the monitoring manhole. Chart 1,  shows the H2S levels recorded during the sodium permanganate test and the effect of changing the permanganate feed rate.

Often a major challenge when treating leachate waste is that the time available for chemical treatment is short and the chemical selected must react quickly.  Sodium permanganate reacts preferentially with H2S within minutes. It cost effectively eliminates the odors before the wastewater leaves the boundaries of the property.

The Solution to the Odor Problem

The landfill site has not received any odor complaints following the startup of the sodium permanganate treatment. The feed rate has been optimized and is set at 2 gallons per hour. In a further treatment system upgrade, the permanganate feed system will be repositioned to the lift station. In the new configuration, the permanganate solution will be introduced into the leachate earlier in the process with better mixing and more reaction time. With the permanganate treatment in place, leachate will be discharged on a more consistent basis, shortening the retention time in the site’s collector well.  This also helps to lower the sulfide formation and optimizes the cost per gallon treated.

At an application rate of 2 gallons/hour of soidum permanganate, atmospheric H2S emissions at the landfill site and downstream in the municipal collection system were consistently lowered. There are no longer neighbor complaints of odors. Additionally, the treatment cost is lower than previously ineffective treatments with chorine or hydrogen peroxide. 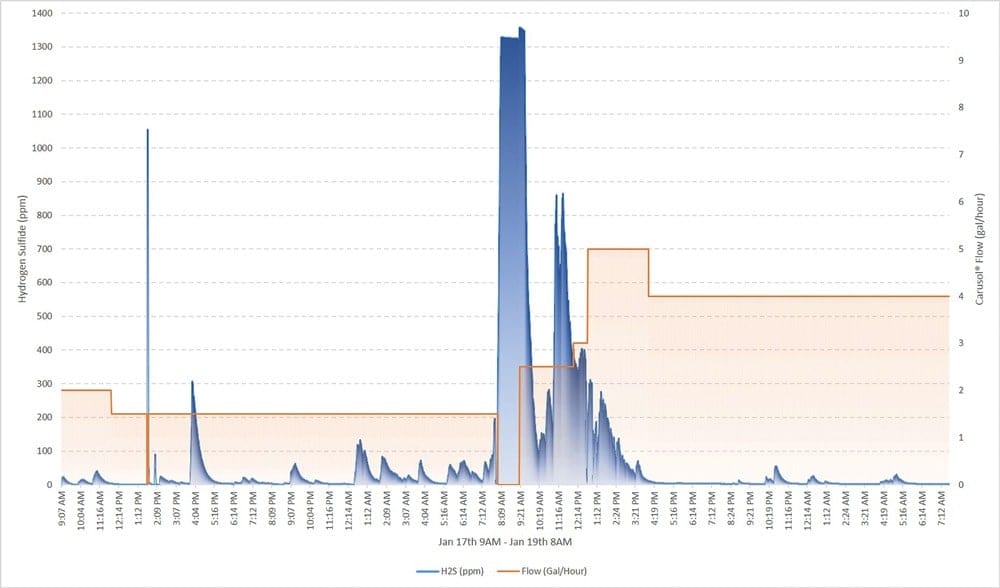 An Ontario, Canada landfill received numerous neighbor complaints about odors associated with the pumping and transfer of leachate. The site collects 130,000 liters of leachate each day in three onsite storage tanks. From the storage tanks, the leachate is hauled by tanker truck to a municipal Water Pollution Control Plant nearby. A high concentration of H2S is released when the leachate is transferred from the trailers to a treatment plant storage tank.

The Environmental Services staff in the region considered several treatment options, (1) permanganate, (2) hydrogen peroxide and (3) chlorine oxidation chemistries. Concerns about the inhibitory effect on the plant’s beneficial biological treatment process was an important factor in choosing a technology.

A survey of the site showed that, in confined spaces, atmospheric sulfide levels were as high as 100 ppm—a safety hazard as well as an odor source.

A quick screening test was run to determine an approximate permanganate dosage necessary to destroy the sulfide odors (see Table 1).

By removing the masking effect of the H2S, it became apparent that there was an organic odor characteristic to the leachate. Lab tests found approximately 2 mg/L of phenolic compounds present in the sample.

Solution
Based on the screening tests, a starting dosage of 150 mg/L potassium permanganate was selected with a goal of controlling the hydrogen sulfide emissions. The actual dosage would be optimized following the initial start-up.
Permanganate feed systems were installed at each of the three storage tanks on-site providing the flexibility to treat only the tank that was scheduled to be emptied. Because permanganate is stable over many months, the product does not lose its effectiveness while in reserve. The permanganate system would be ready when it is needed.
The inlet side of each leachate transfer pump was tapped for the permanganate injection point. The permanganate feed system would run whenever leachate was pumped from the holding tanks to the tanker truck.

Results
The inclusion of permanganate in the treatment process provides the following benefits:
• Hydrogen sulfide is quickly and effectively eliminated from the collected leachate. When the tanker truck arrives at the discharge location, the sulfide odor is gone.
• If necessary, the organic phenolic odors can also be treated.
• The permanganate feed system was in stand-by mode until needed.
Odor-causing chemicals are unhealthy for exposed workers and a nuisance to the public. The addition of permanganate directly to landfill leachate solves many operational problems caused by odors and dissolved sulfides. Importantly, permanganate’s strength means that it reacts rapidly—within minutes.

John Boll is a Technical Program Manager at Carus Corporation (Peru, IL). He can be reached him at (815) 223-1500, via e-mail at [email protected], or www.caruscorporation.com/leachate.

Sean Daoud Joins ISRI Board of Directors as Director-At-Large

The City of Norman, OK’s Sanitation Division: Into the Future

EPA Tools to Assist Cleanup in the Wake of Hurricane Ian