Closed landfills equipped with renewable solar power can produce revenue while contributing to energy independence and reducing our unsustainable dependence on fossil fuels.

Things weren’t going well at the Erewhon Landfill. It was time to close the facility, and there was no soil left onsite for construction of the cap. Erewhon was a County facility, and the money available for 30 years of post-closure gas monitoring, groundwater sampling and reporting, erosion repairs and maintenance of a grass cover was sorely needed elsewhere. The landfill manager recalled hearing about solar energy at closed sites, and when he started looking into it, he realized that here was a solution to his problem. With help from various experts, he was able to permit an alternative closure design using an exposed geomembrane cover. This concept allows a geomembrane to be placed directly over the interim soil cover, and sidesteps the considerable expense of importing soils for construction of an impermeable liner and the required protective soil cover. He wouldn’t have to worry about establishing or maintaining grass, or repairing erosion damage in the cap.

This was just the beginning. The manager was also able to install flexible solar panels on cap, by adhering them directly to the exposed geomembrane cover. He found that there was all kinds of money available, in the form of grants, incentives and tax breaks, to help him defray the capital costs, and that the income from the sale of clean, renewable solar power defrayed his post-closure costs, covered his capital costs with a reasonable payback time and enhanced the County’s image as a trailblazer in energy independence and sustainable development.

The Erewhon landfill isn’t real, but solar landfill caps are. Solar panel arrays have been installed on exposed geomembrane covers (EGC’s) in San Antonio, TX and arrays are being designed and permitted at other sites. The U.S. Air Force has installed a slightly different technology, using rigid panels, over part of a closed landfill in Nevada, and the Army has a solar array constructed over a closed construction and demolition debris landfill near Colorado Springs, CO. At all of these locations, a demonstration is underway of a positive, revenue producing use of closed landfills that is contributing to energy independence and reducing our unsustainable dependence on fossil fuels.

The technology used to generate electricity from sunlight has six components. Solar panels, which can be rigid and mounted on metal frames, or flexible and attached directly to roofs or EGCs, use silicon mixed with exotic metals to create a material that responds to solar energy by releasing electrons. The electrons can be made to move through a circuit and power electrical equipment. Individual solar panels are wired together in various configurations, and groups of panels, called sub-arrays, are wired together in combiner boxes. The electric current from the combiner boxes is direct current, which must be converted to alternating current before it can be used to power machinery or create light and heat for homes and businesses. The conversion occurs in an inverter, which can also contain equipment to make the power compatible with the electrical grid and sensors to block the flow of electrical energy if there is an interruption in the grid power system. Transmission lines and transformers are required to connect the solar array to the local utility grid. The final component between the array and the utility is an electrical meter, which measures and records the amount of power that the array supplies.

Many states use net metering, in which the meter records both the power a facility draws from the utility grid and the amount of power it returns to the grid. The proper measurement and recording of power flowing into the grid is the basis for compensation to the owner of the solar array for the energy he provides to the utility. In some cases, this power can be sold at a premium, since many states mandate that publicly owned utilities provide a certain percentage of their power from renewable sources, including solar.

Solar energy can provide an attractive source of revenue for an owner, but siting an array can be problematic. To understand why, we need to define some terms, including watt and watt-hour. A watt is an instantaneous measurement of energy, or the ability to do work. A watt-hour is a measurement of energy over time; it means that one watt of energy is being provided for a time of one hour. Watts measure instantaneous energy, while watt-hours refer to a sustained delivery of energy. Since a watt is really quite a small bit of energy, we generally append the prefix “kilo-”, denoting one thousand, or “mega-” denoting one million to watts or watt hours. A typical American household might use around 9,000 kilowatt-hours in a year, but could easily draw five or six kilowatts at any given instant. As you can see, to provide power from a solar array for a significant number of households will require a lot of kilowatt-hours. For example, if we use the average consumption rate mentioned above, it would take 9,000,000 kilowatt-hours to power 1,000 homes. Since the array won’t be producing power when it’s dark or cloudy, and since there is some loss of power as electricity moves through the array components, the array will have to have a high kilowatt rating. For purposes of illustration, let’s say that to produce our 9,000,000 kilowatt-hours, we will need an instantaneous power rating rate of 5,400 kilowatts or 5.4 megawatts. If a typical flexible panel produces around 150 watts of power and has an area of 20 square feet, a 5.4 megawatt array would require about 5 acres of panels. A significant amount of additional space, perhaps up to 10 times the acreage of the panels, will be required for maintenance access, the other array components and access roads, etc. All told, the land requirements for a solar array can be significant.

This is the beauty of placing an array on a closed landfill, where tens or hundreds of acres lie idle. Without the renewable energy resource, the closed facility would be of little or no use, and would be a constant financial drain on the property owner. Since many landfills are located away from population centers or in industrial areas, it won’t always be feasible to use the site as yet another park or golf course. However, with a solar array, the property is converted to a source of renewable power, monitoring and reporting costs are defrayed by the income from the produced power, and post-closure maintenance is reduced if the array is attached to an EGC.

The Tessman Road Landfill in San Antonio, TX is a good example of a renewable energy installation installed as part of a landfill closure using EGC. In 2009, approximately seven acres of the landfill were closed using a reinforced plastic geomembrane and placed directly over the landfill interim cover. The interim cover material was compacted and graded smooth before the geomembrane was placed. Anchor trenches were dug parallel and perpendicular to the slope to restrain the geomembrane and allow it to resist the suction uplift forces created by wind passing over the slope. Also considered in the design were the effects of thermal stress, under which the geomembrane expanded and contracted in response to temperature changes, and the potential for hail damage. The geomembrane reinforcement, consisting of a fiber mesh or scrim between two layers of plastic, gave the material the toughness to resist the effects of temperature change, wind and hail. Once the EGC was installed, flexible solar panels were adhered directly to the geomembrane material. The adhesive used was developed specifically to adhere to the geomembrane, and has a long and successful track record of use in roofing applications. The Tessman Road facility is now supplying an estimated 100 kilowatts of clean, renewable power to the local utility grid. Figure 1 shows the array at the Tessman Road Landfill.

An alternative approach, using rigid solar panels on metal frames, has also been successfully employed to bring solar power generation to closed landfill sites. At Nellis Air Force Base in Nevada, a 140-acre array, of which 33 acres are constructed over a closed landfill, produces approximately 14 megawatts of power. Figure 2 shows the array at Nellis.

The system is owned, operated and financed by a private company, which sells generated power to the Base under a 20-year, fixed rate contract. The company also sells renewable energy credits to Nevada Power. Part of what makes this array feasible is Nevada’s aggressive renewable energy policy. The State requires that 15 percent of all utility-generated power come from renewable sources by 2013. This has created a strong market for renewable energy credits. A second facility is located at the Fort Carson Army Base, located near Colorado Springs, CO. The array covers 12 acres and can produce 2 megawatts of power. The landfill, which contains mostly construction and demolition debris, closed in 1973. To finance the construction, Fort Carson leased the land to investors, who financed and constructed the array. The investors will sell power to the base at a fixed rate for a 20-year period, and will also sell renewable energy credits to Xcel Energy, a Denver utility company. Xcel will use the credits to meet the State’s renewable energy portfolio standard, which requires that 10 percent of the Utility’s power be from renewable sources by 2015. Figure 3 shows the Fort Carson array.

Each approach, using flexible panels adhered directly to an EGC, or using rigid panels supported by a metal frame, has its advantages and disadvantages. For soil poor sites, the EGC may be preferable, as it allows the owner to avoid the often substantial cost of importing soil for the closure cap components. On the other hand, the flexible panels are currently less efficient than rigid panels at converting sunlight to electricity. A typical rigid panel might convert 15 percent of the incident sunlight, while a flexible panel might convert only 8 percent. Since the conversion efficiency decreases as the solar cell temperature increases, the flexible panels might show decreased efficiency as the temperature at the ground surface increases on hot days. Despite their drawbacks, the flexible panels do have several advantages. They are cheaper than rigid panels, they accommodate landfill differential settlement better than a rigid panel system, and due to the lack of metal parts in a frame system, they do not require extensive lightning protection systems.

Solar panel costs are trending downward, and installed costs are currently as low as $3 per watt. Widely available tax incentives, equipment rebates and grant money can help defray the capital cost of installing an array. In many cases, the installed cost of an EGC is competitive with the cost of a federally mandated closure , especially in situations where soil must be imported for closure. The annual cost for maintenance of an EGC is much lower than the cost of maintaining a grass cap. And although the benefits in terms of public perception and moving toward a more sustainable energy economy are not quantifiable, they are nevertheless real.

Ted Alexander is a Senior Engineer with KRW Consulting (Lakewood, CO). Under a previous employer, he served as a quality control reviewer for the design of the Tessman Road Landfill solar energy cover, the project manager for the construction of the array, and coordinated the electrical and civil design for the project. He can be reached at (303) 239-9011 or at [email protected]. 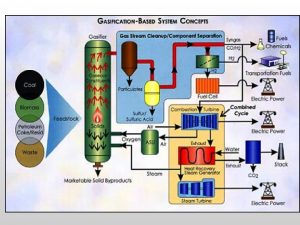 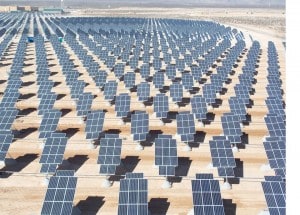