Two of the biggest issues faced by commercial composting operators are emissions (odor and VOCs) and moisture management. Odors and Volatile Organic Compound (VOC) emissions from compost facilities can be highly variable and are influenced by factors such as composting technology, feedstock mix, and operational parameters (initial grind, porosity, saturation, aeration, etc.). Moisture management issues are also complex, ranging from the moisture in the compost to managing the leachate and stormwater runoff, and are also influenced by feedstock mix and many of the same operational parameters.

Limiting VOC Emissions
Over the last 20 years, the regulations set under the Clean Air Act of 1970 have driven innovation in waste management and composting methods. Aerated Static Pile (ASP) composting was first introduced in the 1970s using negative aeration to accelerate and manage the composting process with a much lower risk of VOC emissions. This method also eliminated the need for turning the pile by using negative aeration and simple timer controls.
Air pollution has been addressed on the local level, especially in the State of California where it went the extra mile in addressing its unique air pollution problems. California is now split into 35 air districts, each one facing its own challenges ranging from traffic-related smog in Los Angeles to greenhouse gases in the enclosed San Joaquin Valley caused by nitrogen compounds combined with dust particles from farming.

These issues are obviously not limited to California, as we see VOC emission controls coming up in legislation proposals in many other states due to urban sprawl and the proximity of housing to many organic processing sites. The composting technology you choose for your site should meet the needs and regulatory demands of your locality, which includes being a good neighbor controlling fugitive odor emissions as well as quantitative compound emission control including total non-methane non-ethane organic carbon (total VOCs), ammonia, and speciated organic compounds.

The application of these regulations to the organic waste management industry is clear. Each compost pile requires protections from contaminating waterways and groundwater by clearly separating and managing leachate and preventing storm water from washing contaminants downstream.

Negative aeration systems rely on capturing air pollutants by drawing air through the pile under negative pressure from an external blower and exhausting the air through an end of pipe air pollution control device, such as a biofilter. This requires the aeration blowers to also handle hot corrosive exhaust air plus condensate, instead of handling clean air, through an additional odor control process such as a biofilter. While the initial capture efficiency can be greater than 90 percent control, these systems require maintenance and constant monitoring. Over time the capture efficiency has been shown to decrease to 60 to 65 percent of pile surface emissions, a significant reduction.

Positive aeration systems are also encapsulated, using a blower with motor controls to manage the air input and oxygen levels through a plenum system underneath the pile. Since the air is handled inside a closed system and underneath the pile, the covered system can be more flexible in size and materials. The more advanced positive CASP systems use the blowers alongside
temperature, moisture, and oxygen monitors to finely tune the composting process for the desired quality end product. Positive CASP systems are ideal for all types of feedstock including food waste, green waste, biosolids, and source separated organics. 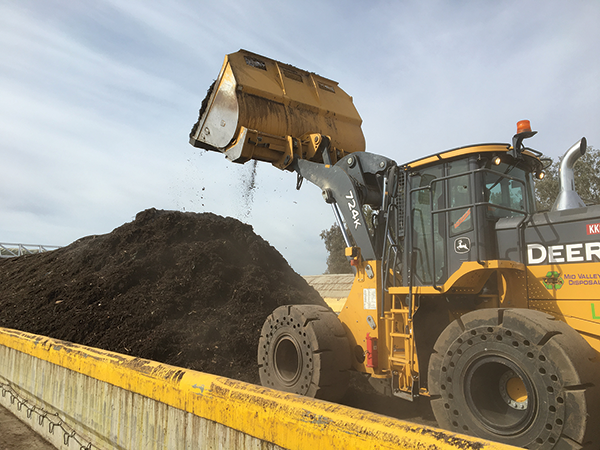 Covered positive CASP systems typically use a compost biolayer, or synthetic covers including polyethylene (PE) tarps, flexible vinyl fabrics, PE fleece blankets and expanded polytetrafluoroethylene. The flexibility and affordability of these cover options allow the system to be scalable, portable, and highly effective.

Advanced composting solutions use semi-permeable, waterproof material technology to encapsulate the compost, with results that offer an advantage over other composting systems, including:

Balancing the cost/performance ratio with the lowest total cost of ownership requiring energy consumption during composting phase of ≤ 2 kWh/ton input material and only requiring one operator per 20,000 tons per year of additional annual capacity

By efficiently reducing greenhouse gases resulting from organic waste, and providing a protective barrier from stormwater and leachate runoff, these types of systems have a long track record of success in California, Florida, and around the world.

Optimal Conditions
Strong environmental awareness, and aggressive climate goals linked to grant funding, provide optimal conditions for the use of such technology which meets or exceeds many state and federal
environmental regulation requirements. | WA

Scott Woods is a contributing writer for Waste Advantage Magazine and the CEO of Sustainable Generation. He can be reached at [email protected]. Sustainable Generation is an Advanced CompostingTM Technology company and the authorized supplier of GORE® Cover technology in North America. The SG GORE® Cover technology recently was selected for use in the first large scale solar composting technology plant in Southern California, located on an unused portion of a landfill. For more information, visit www.sustainable-generation.com or www.gorecover.com.