Per- and Polyfluoroalkyl substances (PFAS) have been called the “forever chemicals” because they do not easily break down in the environment. There may be a solution in dealing with PFAS that not only saves costs, but can also increase revenues.
By Reg Renaud

It appears that the landfill industry has been taking the heat lately since PFAS accumulate in landfills and end up in the leachate. When the leachate is transported to a wastewater treatment facility, the PFAS in the leachate can become their problem. If the wastewater facility does not know of the presence of the PFAS, then the wastewater may not be treated or filtered, thereby allowing the contaminates to be discharged to open water.

Containment
The best way to prevent the distribution of these chemicals is to contain them in the landfill where they can do no harm. As stated, when the leachate is transported offsite, there is a clear and present risk of the chemicals being released into the environment. Therefore, the leachate should be kept and used at the landfill site. Current regulations in most states will allow the recirculation of leachate and condensate at lined landfills. Of course, this only delays the inevitable, with the eventual need to dispose of the leachate due to the amount increasing over time. Furthermore, the concentration of the PFAS increases as the leachate is recirculated. Therefore, this is not really a solution to the problem.

The Solution
The solution for the industry in dealing with leachate and PFAS not only allows leachate to be retained at the landfill, but also is used to produce significantly more landfill gas (LFG) for beneficial uses. The current method of recirculating the leachate increases LFG production by approximately 5 percent with most of the liquid draining to the bottom of the landfill due to poor distribution. The solution for leachate and PFAS issues is to convert the leachate into steam and to inject it into the waste prism.

Studies have shown that every cubic foot of steam injected into the waste is converted into one cubic foot of LFG with 60 percent methane.1 During this process the PFAS can either be digested during the conversion process or will be precipitated out and will remain in the waste prism in a manner that is not a threat to the environment. Further research on these various chemicals is required to determined which (digestion or precipitation) will occur. There appears to be no published record of PFAS being detected in LFG or condensate that is extracted from LFG in gas to energy projects; however, if PFAS are detected in LFG, it would likely be in trace amounts, far below existing regulatory levels, since the steam injection process produces a volume of LFG far greater than natural processes, while the levels of PFAS remain the same. The LFG is then sent to a generator and destroyed or to a gas scrubber for pipeline use.

Figure 1 shows a photo of the pilot study performed at the Miramar Landfill in San Diego, CA. With limited leachate and condensate, the study converted 27.5 tons of organic waste per day and produced on average 330,000 cubic feet of LFG with 66 percent methane and 34 percent CO2 with only 1,500 gallons of leachate and condensate used daily.

Four collectors are installed at the corners of an acre of landfill and three steam injectors are installed down the center of the acre to a depth of 50 to 75 ft., depending on the depth of the refuse. Collectors and injectors should be installed to a depth that is approximately 75 percent the depth of waste in a specific location. The vacuum from the four collectors draws the steam from the injectors towards the collectors; hence, ensuring that what is put into the landfill comes out as LFG. Tests show that by the time the steam has migrated 4-ft. from the injectors and the waste temperature has increased to 120o F, the steam has converted into LFG with a range of 60 to 66 percent methane and the balance being carbon dioxide. 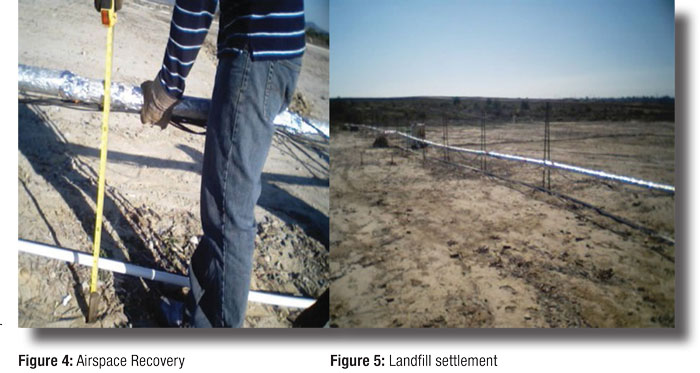 To accelerate the biodegradation of the organic waste, it is recommended that 5,000 gallons of water (leachate) converted to steam should be injected per day, per acre. If 5 acres were treated at a time, requiring 25,000 gallons of leachate daily, it would create 5,400,000 cubic feet of steam equating to 5,400,000 cubic feet of LFG while also converting 450 tons of organic waste per day. Tests have shown that there is a 1:1 conversion ratio. (www.airspacerecovery.com)

Steam and PFAS
Landfills produce various amounts of leachate depending on the amount and type of waste imported as well as the surrounding local climate. The 5-acre plot that we would start with is dependent upon the amount of waste tonnage in the landfill, the amount of import per day and other factors. The longevity of the gas-to-energy project is designed around a 20-year duration or longer. To maximize the profitability of the gas-to-energy project, 25,000 gallons of leachate per day is a good place to start, though this will vary slightly depending on the landfill. It has been reported that PFAS in leachate have been detected at 30 to 5,0003 parts per trillion (ppt) at various landfills with some state actions levels in wastewater being set at 12 ppt.4

Now let’s look at the 25,000 gallons of leachate containing 100 ppt of PFAS. When we expand this leachate 1,600 x, during the steam conversion process, the original volume increases to 5,400,000 cubic feet of steam while the total amount of PFAS remains static. Random sampling of the steam, the results for PFAS, would likely be below detection levels. However, we know the PFAS are still there suspended in the steam, but now it is distributed over a 5-acre area in about 3.2 million cubic feet of refuse. The steam is produced by using waste heat from a generator, therefore no costs are incurred.

The biological processes from methanogens will now break down the water molecules in the steam into hydrogen and oxygen and produce methane and CO2. During this process it is not known if the PFAS will be digested along with other carbon or will precipitate out of suspension from the steam matrix to remain in the landfill. The steam is converted into LFG in the methanogenesis process and has no leaching mechanism.

Past studies show that none of the steam injected into the waste prism returned to the bottom drain of the landfill. It may be the thought process of some that when the steam condenses after the process the PFAS will return to the leachate. This is an incorrect assumption because the leachate is no longer in liquid form, it has been converted to LFG. Of course, LFG is saturated with moisture, but this moisture is usually assumed to come from the source of the carbon, i.e. organic waste, not from the added liquid.

Gas-to-Energy
The steam injection process may help address the challenges of PFAS contamination while accelerating the biodegradation of organic waste in landfills. The process will produce significant amounts of LFG with at least 60 percent methane with the balance being CO2. The 5.4 million cubic feet of LFG can produce 14 MW of power or 3,240 MMbtu of pipeline gas per day. This process can recover airspace by lowering the elevation of the landfill by as much as 40 to 50 percent depending on how much soil was used in the daily cover operations. Annual revenues can range from $14 million to $35 million depending on which products are created, power, pipeline gas and CO2 recovery. The 5-acre plot should last about 1.2 years when another 5-acre plot would be installed. The 5-acre plots can be refilled with waste and re-steamed over and over again.
It is true that if the leachate is recirculated through the waste prism numerous times the level of PFAS contaminants will increase above action levels. The steam injection process can contain this threat to the environment as well as the long-term threat from the organic waste in the landfill. The process will also recover airspace and extend the life of the landfill for decades. | WA

Reg Renaud is President of STI Engineering, Inc. (Silverado, CA) and has been involved in the development and use of in situ testing instruments used in geotechnical and environmental investigations since 1978. He has been an instructor of in situ testing at several universities. He began developing the Landfill Gas 3-D Profiling Method in 1984. Based on in situ data from these profiles and with the understanding of the dynamic conditions inside landfills, he developed the patented Steam Injection Bioreactor Landfill method. From this development he patented the Steam Injected Biomass Reactor (SIBR). Reg can be reached at (714) 649-4422, e-mail regsti@msn.com or visit www.airspacerecovery.com.

NWRA Publishes Poster with Best Practices to Protect Against COVID-19