Overcoming adversity and a series of challenges has given ABC Waste the upperhand in knowing how to strategically navigate the industry as well as its core business.

ABC Waste of Savannah was originally started in Savannah, GA in 1956 by James Hodges and Ellen Flinchum-Hodges. When they began their first garbage company, Superior Sanitation, in Virginia in 1952, Ellen bought the first garbage truck with her own money that she had saved working for the FBI. After a few years, James and Ellen made the joint decision to move back to Georgia, where the original company Superior Sanitation was sold and ABC Waste of Savannah was born in1976 and it stayed as a family business. ABC Waste of Savannah is now owned by their daughter, Carolyn Stewart, President and CEO since 1999, and continues to operate as a family business with the same superior customer service values. “When I was growing up and we would be riding by potential customers and trying to build the roll-off part of the business, my mother would tell us to get out and give them our company’s promotional card. She was the person who pushed me and to go and get it,” says Stewart. When Stewart’s mother left the FBI to marry her husband, she was in charge of more than 20 women and had a full-time scholarship to a secretarial college, but she decided to go into the garbage business with her husband. “My father did the operations but my mother, she ran the office, she did the accounting, collections and some of the sales. She was amazing.”

At the time that Stewart took the company over, she went through some real challenges to get it out of the red and back to working order, learning the business as she went along. “I was a schoolteacher when I took it over and I didn’t know what I was doing but in a month’s time, I made a strategic move. We had 1,096 residential customers and I dropped more than 300 of them so that I could run one truck in order to learn the routine. I told my employees if you need anyone on the truck, call me and I substituted where I was needed, walking behind the truck, delivering residential cans, delivering commercial dumpsters, dumping trash and riding on back of the truck as a toter,” says Stewart. “My husband was also very supportive; he would find ways to keep the business going and even my kids have been involved since a young age, riding along in the truck and helping where they could. They are still involved now at 21 and 18 and have both worked at the company; my son has been in the back of the truck several times and they both have great ideas. It took seven years to get the company out of the red and during that time a lot of people and businesses in Savannah supported me.” Now, the company currently offers mixed residential and commercial waste and single-stream, curbside recycling pickup as well as office paper and cardboard recycling onsite throughout all of Chatham County, including Savannah, Tybee Island, Garden City, Port Wentworth, Richmond Hill and Pooler.

The push for Southern hospitality has grown ABC Waste’s business over the past few years through the recent slow economy. “The downturn in our economy really hurt our roll-off clients as well as some of our commercial businesses. However, we took the opportunity to expand our residential client base. We pushed our recycling program by marketing with flyers and cards in the residential and commercial business areas. It was very successful and that really helped us through the tough times,” says Stewart. Despite the downturn, ABC Waste has also focused on expanding their fleet by 30 percent and they are now working on getting into new areas of recycling. “Many of our customers see the value in it and understand why it is so important. So if our customers are interested, for a small fee we give them a 95-gallon bin for recycling. We made it the same size as the waste bin because we wanted to show that it was just as valuable as trash.” ABC Waste has also been really trying to educate their customers on what to recycle, so they are in the process of creating a newsletter for customers that gives them this type of information—the importance of recycling and how it benefits everyone. Stewart has also invested in an a portable shredder for C&D that shreds 12 tons per hour and 1 million tires per year. “That is what I am trying to promote for big projects so I can show them that we can cut down on a lot of the big waste coming down a high rise teardown project, etc. Things have improved significantly over the past year, plus there are a lot more construction jobs going on now, including a new elementary school being built in Hodge.”

Working Together as a Team

ABC Waste does most of their training in-house and everyone who works with the company understands that the most important person is the customer. “We cross train every employee to make sure that no matter what, our customers get the service they have come to expect from ABC Waste.  Our office staff has washed and delivered out trashcans.  Our mechanics have swapped out large roll-off containers. As the owner, I have even helped dump trashcans in the back of truck.  We all work together as a team to get the job done right. We all support each other,” says Stewart. And that includes safety. ABC Waste generally points employees towards safety courses online where they can go for extra training and safety information as needed. In turn, that person will bring it back and share with others. Currently, Stewart’s mechanic has been riding with the drivers in order to work on some of the issues that need to be addressed. “Right now, our biggest challenge is staffing. We are at a stage in our growth where we are to big for just one person to manage, but not big enough to justify managers over each department.  As every owner in this business will tell you, staffing is always a problem. We generally go to Monster.com, Craigslist and other job sites to look for hires. You can always find someone for the job, but I really want the right person who can work in our sometimes crazy environment.”

She also points out that living in a small southern town has its perks since everyone knows everyone and that helps her get ABC Waste out into the community. “We donate time to local schools. We talk to them and educate them about waste and recycling and really try to be an educational tool. We also help with fundraisers for our local colleges. This last year we started a quarterly raffle with our customers. The prize for the raffle is three months of free service and we also match the donations our customers put in and the winner gets to pick the charity. The response has been great.” 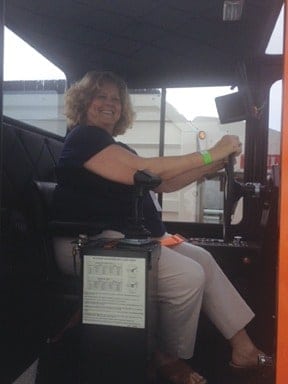 ABC Waste has focused on expanding their fleet by 30 percent and they are now working on getting into new areas of recycling. 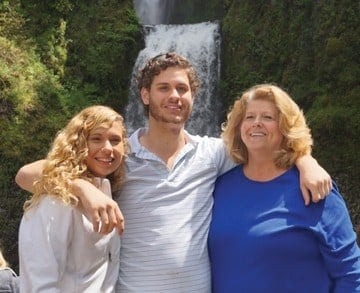 Carolyn Stewart’s children have been involved in the business since a young age, riding along in the truck and helping where they could. They are still involved now at 21 and 18 and have both worked at the company.

When asked about the thing that Stewart is most proud of, she hesitated to name just one. “They all build on each other. If it wasn’t for the support of my family and my husband and kids, at one point I don’t think I could have done it. That is a significant component because if you don’t have the support of family, friends and my great staff, it’s hard to do it on your own. I’m real big into involving my staff because we can’t do it without them. I have learned to always ask questions even to this day. Running a business is not easy; you make mistakes.”

For now, Stewart points out that she would like to build up the recycling part of the business as well as educate the community to participate in keeping more things out of the landfill. “Every company looks to the future and as the owner I am guiding this company toward a greener one. I am doing this in two ways: 1) helping my customers by expanding our recycling services, therefore reducing what I take to our local landfill and 2) helping my employees save some green by looking at better 401k options for their future. I like to shred tires and collect commodities from the different sources. I’ve been going to recycling conferences and working on tweaking my staff to make it the best that I have. There is a lot of opportunity out there. It’s just a matter of picking the right ones to fit your business.” | WA