We are living in uncertain times and there are tough decisions ahead for solid waste agencies. This article summarizes current market conditions for recyclables in the U.S. in the era of the post-Chinese import ban, which went into effect on January 1, 2018, and suggests some short- and long-term solutions.

For years, one of the most visible ways that Americans actively contributed to environmental sustainability and resource conservation has been through recycling materials such as paper, cardboard, plastics and metal. However, much of this material is exported to China where it is used as raw material to make new products. In recent years, China has been the single largest worldwide importer of post-consumer recyclables, consuming more than 50 percent of the world’s recycled paper and plastic and almost 30 percent of all recyclables collected in the U.S.

What Has Happened?
One of the drawbacks of reusing recycled material is managing contamination (i.e., waste residue such as liquid dregs in bottles or food stuck to cardboard packaging). In some cases, 10 to 20 percent of the weight of recyclables being shipped to China was unusable waste. In July 2017, China notified the World Trade Organization that effective January 2018 it would ban imports of some recycled materials, including mixed paper and most plastics. In March 2018, China went further and implemented a strict new policy limiting contamination levels to 0.5 percent, a near-impossible limit for most single-stream recycling programs. To ensure compliance, Chinese customs have implemented the Blue Sky 2018 program to inspect every container entering any Chinese port and reject and return all containers with more than 0.5 percent contamination. As a result, inspections are meticulous at the point of origin and mill buyers will not purchase any loads with more than 0.5 percent contamination. Some in the recycling industry have opined that China appears to be on a path to eliminate imports of all post-consumer recyclables by 2021.

What Are the Impacts of China’s New Policies on U.S. Recycling?
The loss of the Chinese market has disrupted an entire global commodity industry, throwing the global recycling industry into turmoil as commodity prices crashed. U.S. exports of mixed paper to China fell by 95 percent in 2018. Only half of materials formerly shipped to China have found alternative end markets. This has reduced revenues as some materials must be sold at significantly lower prices, sometimes even at a loss. Some material cannot be sold even at a loss and must be landfilled. As a result, recycling revenues are significantly depressed. Figure 1 shows that the national average price paid for a ton of mixed paper varied from late 2016 to March 2018, when the 0.5 percent contamination limit took effect. The impacts of the import ban first appeared in the Pacific Northwest and Alaska, with several solid waste agencies requesting exemptions from state recycling mandates and landfill bans. During the first quarter of 2018, landfilling of recyclables also began in California. Some agencies like Sacramento County have reported that they will be expending much more effort on education and contamination enforcement. The new market realities have severely impacted the County’s recycling budget, with recycled commodities switching from about $1.2 million in annual revenue to $1.1 million in expenses. There are reports from several northeastern and mid-Atlantic states of “orphaned” stockpiles of recyclables.

Will China eventually relax their standards and reopen their market for imports? Although no one can predict what China will do, signs indicate that the events of the past year represent a paradigm shift regarding how recyclables will be managed going forward. The China Council for International Cooperation on Environment and Development (CCICED) recently released a paper stating that a further stop to material imports will be in place by 2019. China’s government is, justifiably, concerned about their environment, and has given clear signals of their intent to eliminate the importation of waste for the sake of raw materials. This suggests that China’s recycling restrictions are here. While it is anticipated that new markets will eventually develop, the timeline for new market development is highly uncertain due to its dependence on establishing new facilities and infrastructure either in the U.S. or overseas. In the meantime, recyclers have already reacted by slowing down processing lines, adding labor and high-tech equipment at sorting facilities to remove contamination, which adds operational cost. Many are focused on “core recyclables” such as clean cardboard and paper, HDPE and PET plastic bottles, and aluminum cans. Many state and local agencies such as Oregon’s Department of Environmental Quality have published statements to make residents aware of the difficulties and urging residents to focus on core recyclables and avoid “wishful recycling.” 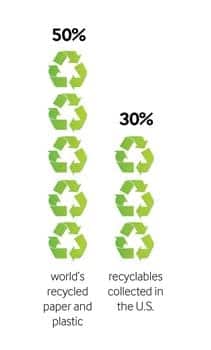 Possible Solutions
Our recycling industry is facing an unprecedented turn of events as a result of policy changes halfway across the world. Recyclers are adapting as quickly as they can but there is no expectation of a return to the old status quo. Over time, help must come from the public in the form of cleaner materials; from regulators by allowing variances from recycling goals; from municipalities by working with their recyclers to understand the options for retaining sustainable programs for the short and longer term. All this and more will be necessary to ensure the future of recycling as a key community service. In the interim, solid waste agencies will be forced to take steps at the local level to mitigate the current recyclables markets conditions. These could include some of the following solutions:
• Take Steps to Reduce Contamination—Local agencies can deploy waste audits to help identify areas in their service area where high levels of contamination continue to exist. A good source of information is joint advisory issued by the Solid Waste Association of North America (SWANA) and the National Waste and Recycling Association (NWRA). Legislation can be enacted to address recyclables contamination; for example, a recent bill in Florida will require municipalities to address material contamination in curbside recycling programs. As written, the bill establishes that solid waste agencies and not haulers or MRFs are responsible for reducing contamination.

• Implement Recycling Education Programs—Education is critical to the sustainability of recycling programs. A good rule of thumb is to spend $1 per household per year to maintain strong participation. For a programmatic change (e.g., switching from single to dual-stream collection), add another $2 to $3 per household to cover a marketing campaign. A strong campaign will decrease resident confusion, lessen contamination and disposal expenses, increase quality and quantity of recovered materials, and maximize use of recycling system capacity. Production-ready examples of campaign materials are available from SWANA, NWRA and other local solid waste agencies. Teams of communications specialists can help design a campaign.

• Conduct Proactive Financial Planning—Many agencies have not developed long-term financial plans for recycling programs and have not set aside reserves or “rainy day” funds, despite recycling markets having shown significant variability due to a variety of global and local economic issues. Developing a long-term financial strategy can help mitigate these fluctuations. Solid waste advisory specialists have unrivaled expertise in objectively reviewing, analyzing, and measuring financial performance and comparing them to industry benchmarks using custom financial models.

State and Federal Support
At the state and federal levels, several concrete policy changes will need to be implemented, including:
• Change in Tax Policies—Currently, the Federal Tax Code provides significant financial advantages to manufacturers of virgin materials through investment tax credits, advanced depreciation write-offs and the like. These reduce the price of virgin materials. Changes in tax policy should be examined to “level the playing field” for recycled materials.

• Producer Responsibility—Extended producer responsibility (EPR) is a strategy designed to promote the integration of lifecycle disposal/recycling and other environmental costs in the market price of a product. EPR is based upon the principle that because producers (usually brand owners) have the greatest control over product design and packaging, they have the greatest ability and responsibility to reduce toxicity and waste. British Columbia has piloted a novel EPR program in recent years that has transferred the cost of recycling programs from local government to manufacturers and their trade associations.

A Larger Policy
The far-reaching impacts of the China import ban have likely not yet played out fully. The current policy by China is part of a larger policy to improve environmental quality for an increasing middle class as well as ongoing trade negotiations with the U.S. However, some conclusions can be drawn at this juncture:

Authorities and muncipalities are expanding services to stakeholders—doing more with less, while maintaining high standards for safety and environmental compliance. A solid waste advisory team is a trusted resource to successfully meet these challenges. They can help to provide comprehensive solid waste advisory and engineering plan for your organization.