In order to make waste collection cheaper, cleaner and more proficient, the DPW has not only moved to automate the city, but also transition the fleet to CNG and increase recycling strategies.

Nestled in the heart of Indiana, this capital city with a population of near 1 million residents home to the Indianapolis Motor Speedway, the Indiana Pacers and the biggest Children’s Museum in the world. Among these top attractions, Indianapolis’ Publics Works Division (DPW) handles the city’s solid waste and recycling with 101 vehicles in their fleet and 104 full-time employees. They collect pedestrian recyclables that are placed in bins around the downtown area, at designated city and county locations, and have a recycle roll-off program where 20 and 30 yard recycle containers are placed around that city to collect commercial material on a weekly basis. The city is divided into 11 trash districts with three haulers servicing all districts. Republic Services has six districts, Waste Management services two districts and the Indianapolis DPW services four districts—more than 264,000 homes every week (nearly 15 million homes per year). Private haulers are responsible for sorting and repurposing recyclables that are collected. The city has partnered with a few in the city to make sure that subscription service is available to residents that would like to participate.

One of Indianapolis DPW’s biggest challenges has been to make waste collection cheaper, cleaner and proficient. In order to address those three topics, the DPW made the move to automate service in the inner city. The automated conversion began in 2010 with several public meetings within the impacted service area, so residents could ask questions and start to have a clear understanding of the savings associated with the change. From start to finish the project took eight to 12 months and those involved found that the biggest challenge was notifying the residents, explaining the rules of collection within an automated area and deciding the cart deployment plan. However, the move was ultimately successful. “Now, in several areas of Marion County, trash is collected from DPW-issued 96 gallon carts by automated trucks. Each eligible residential unit is issued one cart. These carts are assigned to the home and must remain there if the resident moves,” says Solid Waste Administrator, Anthony McDaniel.With automated collection, trash pick-up is cheaper, safer and cleaner.  It not only reduces costs by preventing injury to DPW workers since heavy lifting and riding on the back of trucks is no longer necessary, but it also increases public safety as the containers are easier to manage and less likely to protrude into pathways. McDanielalso stresses that the automated process protects public health by keeping trash secure from the elements and away from animals and limits illegal dumping and makes it easier to investigate. “Complete automation of our inner city is our most outstanding achievement we have done so far,” says McDaniel.

Not only has the DPW helped to provide cleaner service at minimal cost to resident, they have also provided community outreach as often as possible. “Our supervisors attend community meetings regularly to help answer questions in the community on proper trash placement and guidelines. We have Mayor’s Neighborhood Liaisons that are on the front lines to gather feedback and help get complaints resolved,”says McDaniel. The DPW participates in community events as well, including earth-day fairs, partnering with the Great Indy Cleanup (Keep Indiana Beautiful’s anti-litter program that is designed to combat heavy litter and debris that has accumulated in public areas spaces such as streets, alleys and waterways) and being involved in other specific community days around the city. They also perform outreach to local elementary schools for education when requested or during National Public Works Week.

In December 2012, Indianapolis’ Mayor, Greg Ballard, signed Executive Order #6, making Indianapolis the first major city in the United States to pledge to convert its entire municipal non-police fleet to electric or plug-in hybrid vehicles by 2025. This means that the DPW will be making the transition to more community and environmentally friendly vehicles.  It will also save the taxpayers fuel, energy and money over the lifecycle of the new vehicles.Mayor Ballard also is committed to transitioning the city’s more than 200 heavy fleet vehicles, such as snow plow equipment, trash trucks or fire engines, to compressed natural gas, or CNG.

The DPW also wants to make sure that their employees are on top of new industry information that may affect them in the long run. “Training is headed up through our environmental section. We detail and keep track of all training courses and on the job training and adhering to the IOSHA regulations,” says McDaniels.

The Indianapolis DPW solid waste team always strives to maximize efficiencies at every chance. The DPW’s next challenge is converting other contracted areas to automation. “Right now our private hauler districts do not have automated service,” says McDaniels. “Residents put their trash out in bins or bags, but we want to change that process and make it more efficient.

“We are also looking at increasing our city’s recycling participation and decreasing illegal dumping. These are ongoing efforts and we will continue to coordinate with organizations like Keep Indianapolis Beautiful and our city’s Department of Code Enforcement to accomplish these efforts.”

For more information, contact Lesley Gordon, Public Information Officer for Indianapolis’ Department of Public Works, at (317) 327-4000 or via e-mail at Lesley.Gordon@indy.gov. 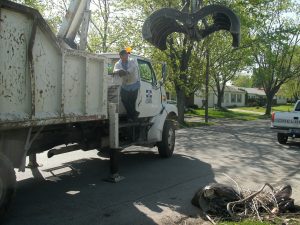 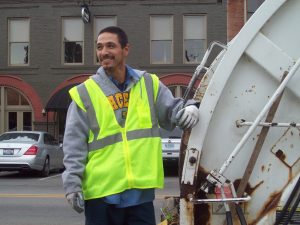 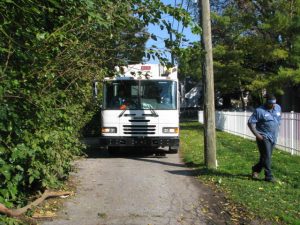 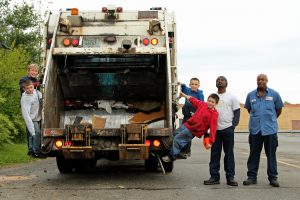 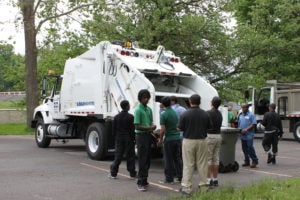 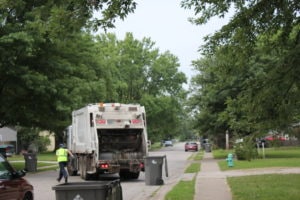 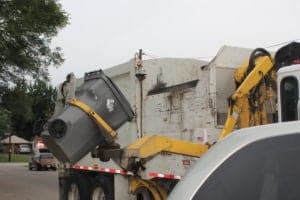 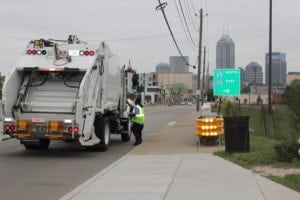 Mountain Brook, AL Cleans Up Its Recycling Most in Six Months