When the city of Rocky Mount, NC needed to replace their tipping floor due to excessive wear and tear, Leak & Associates stepped up to the challenge and installed a long-term solution.

The City of Rocky Mount, NC owns and operates a solid waste transfer station where solid waste is loaded for transfer to an approved solid waste landfill. Rather than garbage trucks making daily trips to a landfill, the trucks complete their route and deliver the garbage to a central transfer station, where they “tip-out” the garbage onto a concrete floor—the tipping floor. Over time, the tipping floor deteriorates due to the constant pounding and scraping of heavy equipment. After just four years of operation since the previous tipping floor replacement, the City noticed problems with the floor. The City was also experiencing failures in the steel push wall at the facility.

In 2014, the City contacted Appian Consulting Engineers to provide recommendations for repair of the tipping floor and push wall. Appian’s scope of work generally consisted of evaluating the existing floor and push wall, preparing a cost/benefit analysis of available options, providing recommendations for a long-term wearing floor surface and preparing construction documents for the repair method selected.

Solid Waste Volumes and Characteristics
The City of Rocky Mount receives municipal waste at this site in accordance with North Carolina Solid Waste Management Rules NCGS 130A. The facility does not accept hazardous waste, yard trash, liquid wastes, regulated medical waste, sharps not properly packaged, regulated asbestos containing material and wastes banned from disposal. The waste collected at this transfer facility is transported offsite to a regional sanitary landfill facility. The City does not use chemicals for washing the concrete floor. The facility is regularly inspected by the North Carolina Department of Environmental Quality (NCDEQ) Division of Waste Management Solid Waste Section. The facility operates five days/week for 52 weeks/year, with a total of 260 days/year in operation. From annual reports submitted to NCDEQ Solid Waste Section for reporting years 2013 to 2018, Figures 1 and 2 show the amount of solid waste received.1

Existing Tipping Floor
The original base concrete was installed in 2001, with an additional top concrete slab placed in 2008. The reinforced top slab was to be bonded to the existing substrate slab with epoxy adhesive. In spring of 2008, the bonded 7″ slab was installed on top of the underlying 8″ structural slab, at an approximate cost of $88,000, or $16/sf (see Figure 3).

In 2012, the City began to notice that the floor showed significant signs of wear after just four years of use. Large areas of the top slab had eroded 3″ in depth, so that that reinforcing steel was exposed and, in some places, protruding dangerously. Almost 25 percent of the floor became severely eroded so the City installed an asphalt patch for temporary repair. The push wall also needed repairs, as the structural attachments had pushed through the wall leaving holes.

The New Floor
In 2014, the City contacted Appian Consulting Engineers to provide recommendations for repair of the tipping floor and push wall. The tipping floor replacement was to be part of an overall transfer station improvement project that included truck scale replacement, scale house exterior improvements, storm drainage and asphalt paving.

Appian consulted with Geotechnologies, Inc. to evaluate the condition of the existing floor and obtain concrete core samples for testing. Chemical testing indicated that there did not appear to be a serious impact on concrete from acidic waste materials. There was no visual evidence that the concrete was being impacted by alkali-silica reaction (ASR).

As part of due diligence in researching repair options, Appian contacted numerous municipalities to determine their success with floor topping products and repair systems. They interviewed multiple tipping floor operators and researched several different overlays and toppings. Some of the products could be installed quickly, but frequently they did not meet expectations (at a cost of $22 to $45/sf). Several municipalities were extremely satisfied with work performed by Leak & Associates, who had installed tipping floors that successfully served for nine to 15 years without signs of deterioration (at a cost of $9/sf to $33/sf).

Appian prepared a bid package and plans to remove and replace the existing 7-inch solid waste tipping floor and install a 6-inch wear course. The bid package was structured to enable bidders to provide an alternate design/build method or proprietary concrete slab that would provide adequate wear resistance with 10 to 15 years longevity. Figure 4, shows the proposed floor section for bidding, though it was revised during construction.

Cost
The City received bids and awarded a design/build contract to Leak & Associates for the placement of the concrete top slab and repairs to the push walls (see Figure 5). Leak & Associates, Inc. specializes in the solid waste infrastructure, constructing transfer stations, recycleries, convenience centers and landfill leachate containment facilities. Leak & Associates has provided construction, planning and design-build services for both the private and public sectors for more than 25 years. They provide these services across the Southeast in North Carolina, South Carolina, Tennessee, Virginia and Georgia.

The contractor provided engineering design and sealed construction plans prepared by Simpson Gumpertz & Heger, Inc., that included the following:
• Design for constructing a “sacrificial” concrete slab on top of the existing slab. The concrete for the new topping slab was optimized to have low shrinkage and curl and high abrasion resistance by the incorporation of specialty chemical admixtures, and optimizing cementitious materials and aggregate gradation. Additionally, the slab was reinforced, jointed and detailed to minimize cracking and wear.
• Plans for removal of damaged floor areas prior to placement of the topping slab.
• Design of approximately 150 feet of new steel-plated reinforced concrete push wall (4 to 8 feet in height, 8 inch thick).
The floor was engineered in such a manner that when isolated areas would require repair or replacement, just those areas need be removed and not the entire floor. This feature was instrumental in the City’s decision to install the “sacrificial floor” concept.

Construction
To accommodate for repairs to the push wall, installation of the new concrete floor and installation of a new asphalt apron, the entire project consisted of a 10 day continuous period of construction beginning on a Thursday after normal closing hours (4:00 p.m.), continuing the next week and ending Monday morning prior to normal operating hours (7:00 a.m.). The construction period was June 19 to 27, 2014. The tipping floor was closed for eight working days, during which an old tipping floor adjacent to the facility was used. Trash delivery was not interrupted.

“In order to accomplish all the repairs, the city met with inspectors from NC DEQ and requested to use the recyclables tipping floor for MSW. The schedule was critical and agreed to by NC DEQ,” said John Leak, President of Leak & Associates. “The city had this unique situation where they could allow the tipping floor to be closed for an extended period of time. Most projects only allow the tipping floor to be closed four or five days consecutively, or repair one half the floor one week while keeping half the facility still in operation and repeat the process the next week. The longer the usual closed time allowed, a longer concrete cure time that was beneficial for the tipping floor and the push walls from a performance standpoint.”

Testing
Geotechnologies provided concrete testing services throughout construction (see Figure 6 and 7). The project was completed on time with no change orders. More than 200 cubic yards of concrete were installed and provided 80 percent strength after just three days, allowing transfer station operations to resume as scheduled. 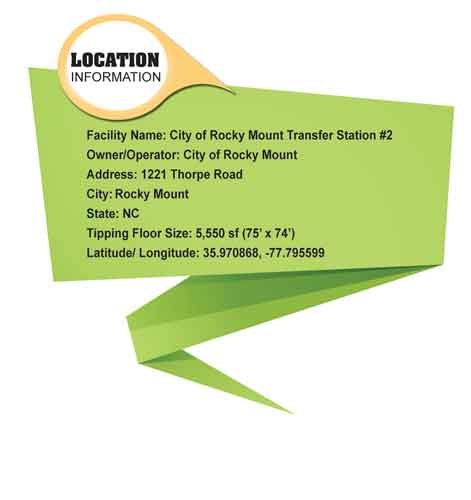 Five Years Later
Appian inspected the tipping floor facility in June 2019 to evaluate its performance and found the push wall and tipping floor in excellent condition. They interviewed City staff who said that were very pleased with how the facility was performing, noting that the floor was holding up much better than previous overlay repairs. There was no gouging or areas of concern, even after the City had processed almost 350,000 tons of solid waste since installation of the floor in 2014. “The experience working with Appian engineers and Leak & Associates was very rewarding and beneficial. we learned a great deal during the course of the project. Appian engineers continues to be a great resource to the City of Rocky Mount,” said Tim Farmer, the City of Rocky Mount’s Public Works Operations Manager.
Appian obtained detailed measurements of the wear plates and determined that there was minimal deterioration of the sacrificial wear slab over the past five years (see Figure 8). The wear plates indicate that the average deterioration of the new sacrificial floor (6″ to 9″ concrete slab) was less than 1 inch in the past five years. At the current rate, the projected life expectancy is more than 20 years without the need to replace the floor. If repairs are needed in the future, the floor is designed in such a manner that only the required sections need be replaced, not the entire floor—saving significant expense.

The City of Rocky Mount Transfer Station tipping floor is performing better than expected, with no concerns or significant deterioration in the first few years. The City’s decision to award the project as a design/build construction project while maintaining third party engineering supervision proved to be a great success. Said Farmer, “The rehab of the floor was a very smooth process and the floor has and continues to hold up tremendously considering the extreme amount of usage and volume of material handled. It has held up better than what was originally put down.” | WA