While climate change is not a controllable phenomenon, hazardous waste facilities can prepare themselves for emergencies by developing clear, effective plans.
By Jonathan Sharp

Climate change is undeniable as a global phenomenon, occurring since 1800, when the Industrial Revolution was at its peak. It is taking place right before our eyes, and its effects—higher temperatures, extreme weather, rising sea levels, and warmer oceans—are visible, tangible, and measurable. The cause of climate change is primarily environmentally damaging human activity, such as burning fossil fuels, cutting down forests, and using cars as our main transportation mode. 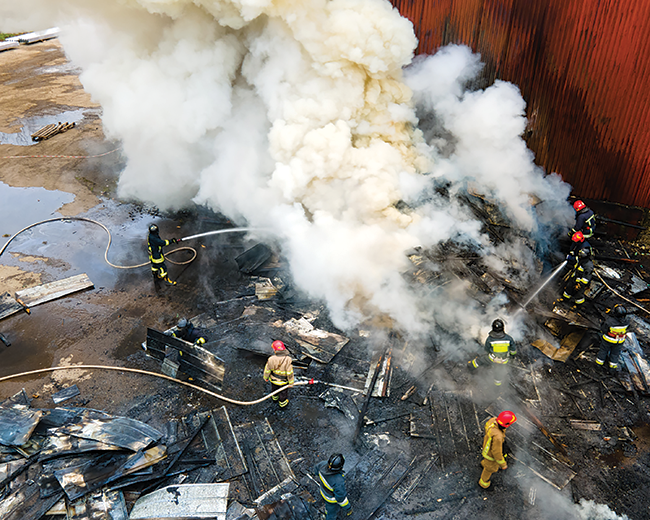 Besides taking a toll on the environment, climate change also wreaks havoc on the waste management industry. Numerous hazardous waste facilities are in low-lying coastal areas, vulnerable to damage from hurricanes, flooding, and erosion. These weather phenomena are becoming more frequent due to climate change. The extreme weather caused by climate change can trigger industrial disasters such as explosions, fires, and major chemical releases that can affect both workers and nearby communities.

Unfortunately, most hazardous waste facilities in the U.S. are not prepared to handle a potential industrial disaster triggered by climate change. The regulations in this respect are very lax.

Climate change is inevitable and will become more problematic for hazardous waste facilities, particularly for those susceptible to being struck by extreme weather such as hurricanes. However, while climate change is not a controllable phenomenon, hazardous waste facilities can prepare themselves for emergencies by developing clear, effective plans.

How Natural Disasters Triggered by Climate Change Pose a Risk to Hazardous Waste Facilities and Nearby Communities
Across most of the U.S., the public is not adequately protected from spills and other industrial disasters involving the storage of hazardous chemicals in above ground tanks. Sadly, federal and state regulators have been significantly underestimating the real threat of unregulated tanks, while policymakers have been
ignoring the promised benefits of thorough protections, such as those awaiting approval for decades for hazardous waste tanks. Full of hazardous chemicals, these tanks seem to be everywhere in our landscape—hidden in industrial parks or towering along railways and waterfronts. Nevertheless, those located along coastal areas have the highest risk of being hit by a natural disaster caused by climate change, as their location increases their vulnerability.

In 2010, the Agency for Toxic Substances and Disease Registry launched the National Toxic Substance Incidents Program, a chemical incident surveillance program that aims to “protect populations from harm caused by acute toxic substance releases.” Between 2013 and 2014, there were 2,575 chemical incidents, out of which nearly 13 percent occurred in a “storage area above the ground.” The most frequently reported health effects among nearby communities exposed to the chemicals that leaked from above ground tanks were respiratory system problems, burns, dizziness, other nervous system problems, and trauma. Nonetheless, severe toxic exposure can result in significantly more serious health problems, including cancer.

The Correct Waste Management Procedures for Some of the Most Common Hazardous Substances
According to federal law, chemical waste must have storage, containers, and labeling. All hazardous waste containers must be kept closed during storage, except when it is necessary to add or remove waste.

Containers must be maintained in good condition, more specifically with no rust, dents, or leaks, and must be compatible with the hazardous waste they contain. As for labeling, both federal and state laws require labels to list the container’s contents. Subsequently, the label must be marked with a waste accumulation start date, generator name, room location, and container contents.

There are some day-to-day items people use in offices, shops, and laboratories that contain hazardous components, so it is forbidden to throw these objects away in the “regular” trash. If handled adequately, most of these items can be recycled to help reduce the total cost of waste disposal. These items fall within the “universal/special wastes” and contain the following substances.

Mercury
Hazardous waste facilities must store mercury containers inside a larger container with a tight-fitting lid and place oil-absorbent matter around it to protect the container from breaking or sudden shocks. Numerous products, including thermometers, manometers, thermostats, and other pressure gauges, contain mercury, a very toxic heavy metal.

These instruments and elemental mercury, which is mercury in its natural form, must be disposed of by contacting your local municipality or solid waste district if you are a small business or individual. Furthermore, some towns and solid waste districts hold hazardous waste collection days every year. Mercury poisoning can lead to symptoms such as headaches, tremors, kidney damage, and muscle weakness. It can be deadly, which is why it is recommended to handle mercury-containing products with the utmost care.

Nevertheless, you may have old objects containing these chemicals in your house that you wish to dispose of. Like items containing mercury, it is forbidden to throw PCBs-containing waste in the “normal” trash. Instead, you should contact your local municipality or solid waste district, which will guide you in this regard. PCBs exposure is strongly associated with malignant diseases such as melanoma, liver cancer, gall bladder cancer, gastrointestinal cancer, and brain cancer.

Asbestos
Depending on whether they are friable or non-friable, hazardous waste facilities may store asbestos in different ways, such as isolating the friable products to prevent carcinogenic fibers from escaping. Between the 1920s and the 1980s, asbestos was widely used in more than 3,000 different items, from boiler insulation and floor tiles to hairdryers and fake snow. If your house was put up before the 1980s and you have not renovated it, it most likely contains asbestos somewhere.

To dispose of these items, which will most likely be old construction materials when you are renovating or remodeling, you should look for the nearest landfill that accepts asbestos. If you work with a construction company, this may fall under its responsibility. Asbestos exposure can cause numerous life-threatening diseases, including lung cancer, asbestosis, and mesothelioma.

How to Properly Prepare for Natural Disasters Caused by Climate Change as a Hazardous Waste Facility
To minimize the risks of injury, environmental harm, or regulatory penalties, a successful and effective response to a natural disaster requires vast expertise and knowledge of hazardous materials and waste management. Often, a good natural disaster plan involves an emergency response to one or more types of spills, such as fuels and chemicals. First, a critical task for developing a plan to handle natural disasters caused by climate change entails identifying unknown substances, spill containment, proper waste handling, and cleanup. Before establishing any steps, it is necessary to understand the definition of hazardous waste. The EPA deems hazardous waste as “waste with properties that make it dangerous or capable of having a harmful effect on human health or the environment.”

Hazardous waste has ignitable, corrosive, reactive, or toxic characteristics. To determine whether a product is a hazardous waste, review its safety data sheet, manufacturer information, label, and ingredients. Subsequently, you should come up with emergency response by considering several key factors. You should assess your facility’s risk for each natural disaster. For instance, a hazardous waste facility on the Pacific Coast has a higher risk of being affected by earthquakes, wildfires, and mudslides. On the flip side, a facility on the Atlantic Coast is more likely to encounter hurricanes and flooding. Next, you should determine emergency response roles, such as who will make essential decisions during a natural disaster, who will be responsible for managing hazardous waste, and who will assist during removal.

Another important tip is to safeguard your waste. Before a natural disaster strikes, the facility manager can take practical steps to prevent waste from leaking inside the facility and outside among the neighboring communities. If possible, remove excess hazardous waste from the facility before a dangerous weather phenomenon hits. If you must deal with a container leak, the crucial steps are identifying the spilled material and securing the container for cleaning. For safety, you must monitor the entire process to ensure timely and precise communication, proper documentation, and appropriate procedures. Finally, you should implement a post-incident response process. It will help ensure the facility has taken the required steps to lower further risk after a natural disaster.

The following are some valuable tips on how to plan your emergency response depending on the natural disaster your hazardous waste facility is most likely to encounter:

Develop Your Own Plan
While the rules concerning how facilities that store hazardous waste are lax, each facility can develop its own emergency plan to use in the event of a natural disaster triggered by the inevitable climate change. By using the ideas presented here and by doing more research, the leading team of such a facility can create a strong, foolproof plan to handle extreme weather events. | WA

As Chief Financial Officer at Environmental Litigation Group, Jonathan Sharp is responsible for managing firm assets, collecting and distributing funds, and financial analysis. The law firm, located in Birmingham, AL, specializes in toxic exposure, assisting individuals and communities affected by hazardous substances. He can be reached at [email protected] or visit www.elglaw.com.