The Earth is facing a climate change crisis which is mostly caused by the release of carbon-dioxide (CO2) into the atmosphere which is called emission. There are lots of ways to reduce emissions. For instance, abandoning using fossil fuel vehicles plays an important role in reducing emission values. Due to Electric Vehicles (EV) or Electric cars do not produce any carbon emissions in their lifetime, they can be a better alternative for fossil fuel vehicles. Although they seem like fully environmentally friendly technology, they can be very harmful if precautionary measures do not follow. Batteries of EV’s can be said as a time bomb. At the end of their life span, millions of them will be e-waste with a high risk for storing. In this essay, the current and future status of EV Batteries recycling will be examined. 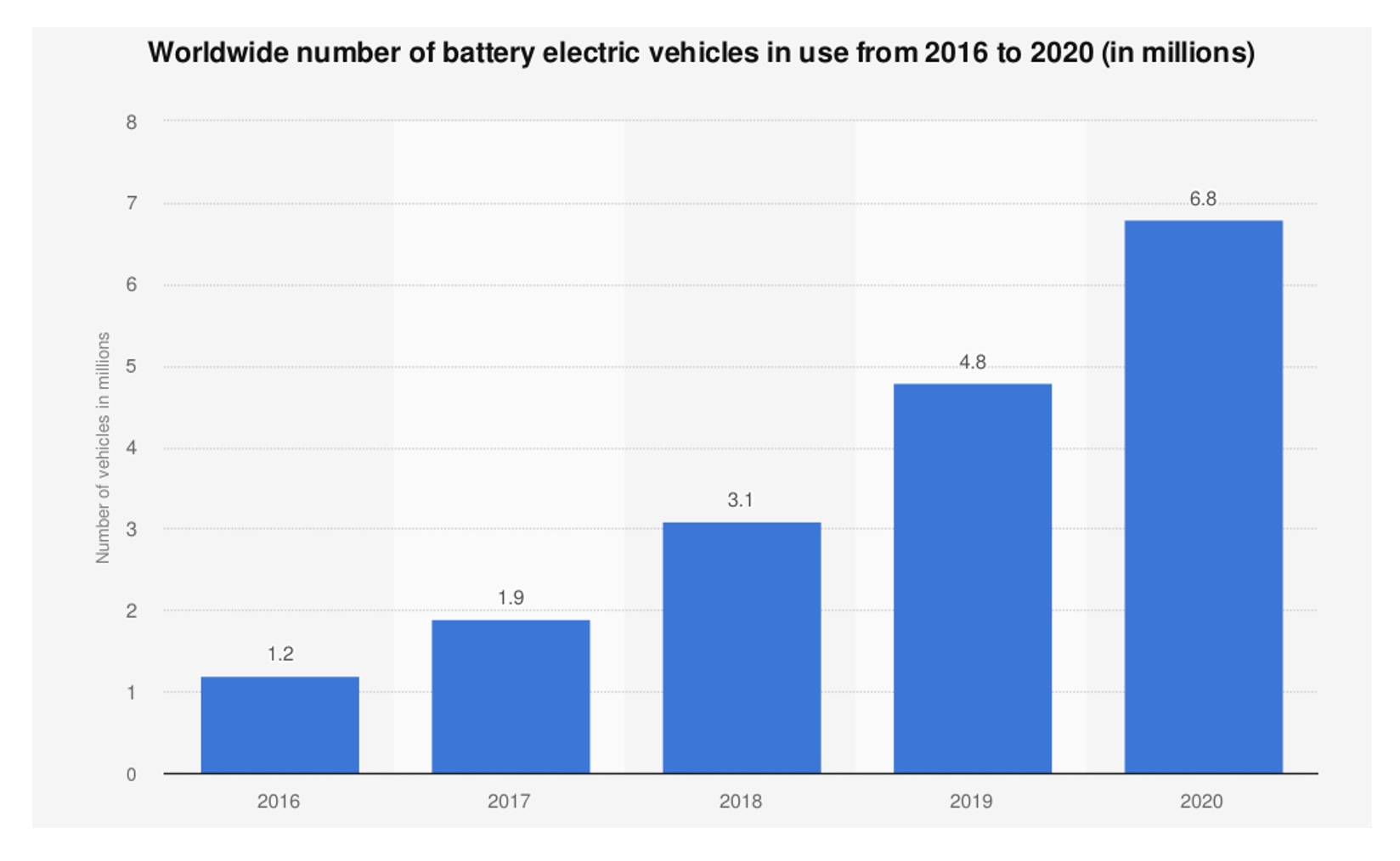 As can be seen in the graphic above, the use of electric vehicles is increasing rapidly worldwide. Although there are different analysis results for the future estimation, they all meet at one common point: at least 150 million EV vehicles will be on the roads worldwide by the end of 2030. Also, in ten years more than 12m tons of lithium-ion batteries are expected to end their life. While electric vehicles can reduce emissions, lithium-ion batteries pose unique sustainability challenges. It is necessary to be prepared for this and have a recycling industry in advance. Those batteries can not be wasted because of several reasons. The first one is Lithium-ion batteries are toxic and can cause a rapidly spreading and devastating fire. Keeping them together is especially dangerous. For example, according to EPA report lithium-ion batteries caused at least 65 fires at municipal waste facilities in 2020 in just USA. Another reason is batteries are made of lithium along with a mix of other elements that can include cobalt, nickel, manganese, and iron. These elements are valuable metals. Also mining many of these metals can raise ethical and environmental concerns, and some of these elements may cause global shortages due to potential demand for batteries.

Today, much of that mining is concentrated in countries like Russia, Indonesia, and the Democratic Republic of Congo, where environmental oversight is typically low, labor standards are often lax, and the mining business has a history of inflaming local communities. Therefore, creating a circular supply chain by recycling battery materials will be key for reducing their environmental impact. However today approximately only 5% of lithium-ion batteries are recycled globally. The exterior and interior designs of the EV Batteries are shown below.

Current recycling processes technology is open to improvement. Because of the cost and complexity of EV battery disassembly, it can be said that current EV batteries are not designed to be recycled. First of all, the EV batteries have different chemical features and structural design which makes them difficult to create an efficient recycling system. Then, EV batteries consist hundreds of individual lithium-ion cells, that need to be disassembled. Inside each cell, lithium atoms flow through an electrolyte between a graphite anode and a metal oxide cathode sheet. These cells are secured with a strong adhesive that is difficult to disassemble and it contains hazardous materials that tend to explode if they are not disassembled correctly. The recycling process in the pyrometallurgy technique generally involves the steps given below: Batteries are discharged and body of the batteries are removed from the cover. After then, batteries sent to the shredder to obtain very small pieces, that is called black mass. Then these materials go to the furnace for the break them further with heat or chemicals. In this furnace, lighter materials such as lithium and manganese burn and higher value metals such as copper, nickel, and cobalt are left behind. Then these metals can be extracted with different acids. Another method is called the hydrometallurgy technique which is also aimed for extract cathode materials. It involves putting battery materials in pools of acid for producing a metal-laden soup. Hydrometallurgy can extract materials by burning ​that are difficult to obtain. Sometimes these two methods are used together because each one has its own advantages and disadvantages.

Direct Recycling is another method that can be process on EV batteries. It is relatively new method but has got some advantages. It would keep the cathode mixture intact unlike current methods. In direct recycling first step is to vacuum away the electrolyte and shredding battery cells. Then binders would remove with heat or solvents. Flotation technique is used for the separation of anode and cathode materials. Right now, direct recycling experiments have only focused on single cells, and only tens of grams of cathode material have been produced. According to Reuters, researchers have found a way to use ultrasound to recycle the cathode and anode without shredding. The methodology can be summarized as this; ultrasonic waves recover cobalt, nickel, and manganese cathode powder from the aluminum sheet and the copper sheet is removed from the anode powder. There are some difficulties on direct recycling such as separating different cathode chemistries. As mentioned before, these studies were done at the laboratory scale and researchers separated battery cells by hand. On an industry scale, manual separation is not possible and solving this problem has critical importance. Due to the adhesive inside EV batteries, they can not be opened efficiently. For that reason, researchers recommend battery manufacturers to consider recycling while designing their products. However, it is obvious that leaving this kind of issue to the discretion of the producers will not bring a solution. Governments should harmonize the EV battery industry by contemporary and up to date regulations. The regulations should contain these items but are not limited to: standard battery design for easier separation, battery take back programs, laws which ban landfilling, rules about transportation of hazardous battery waste. Thus, it would not only help to reduce pollution, but it would also help the governments to improve their economy. Besides, it is possible to improve national security governance by obtaining battery metals such as rare earth elements which are controlled by just a few countries.

As Proses Makina Company, we design and manufacture EV batteries recycling systems. Our goals are to leave a better and sustainable life for the future by producing environmentally friendly recycling systems and providing the most profitable service for our customers. Proses Makina Company has completed various R&D studies about EV Battery recycling and it still continues to achieve the optimum system by making it more efficient. Diagram of how our recycling processes works is given below: 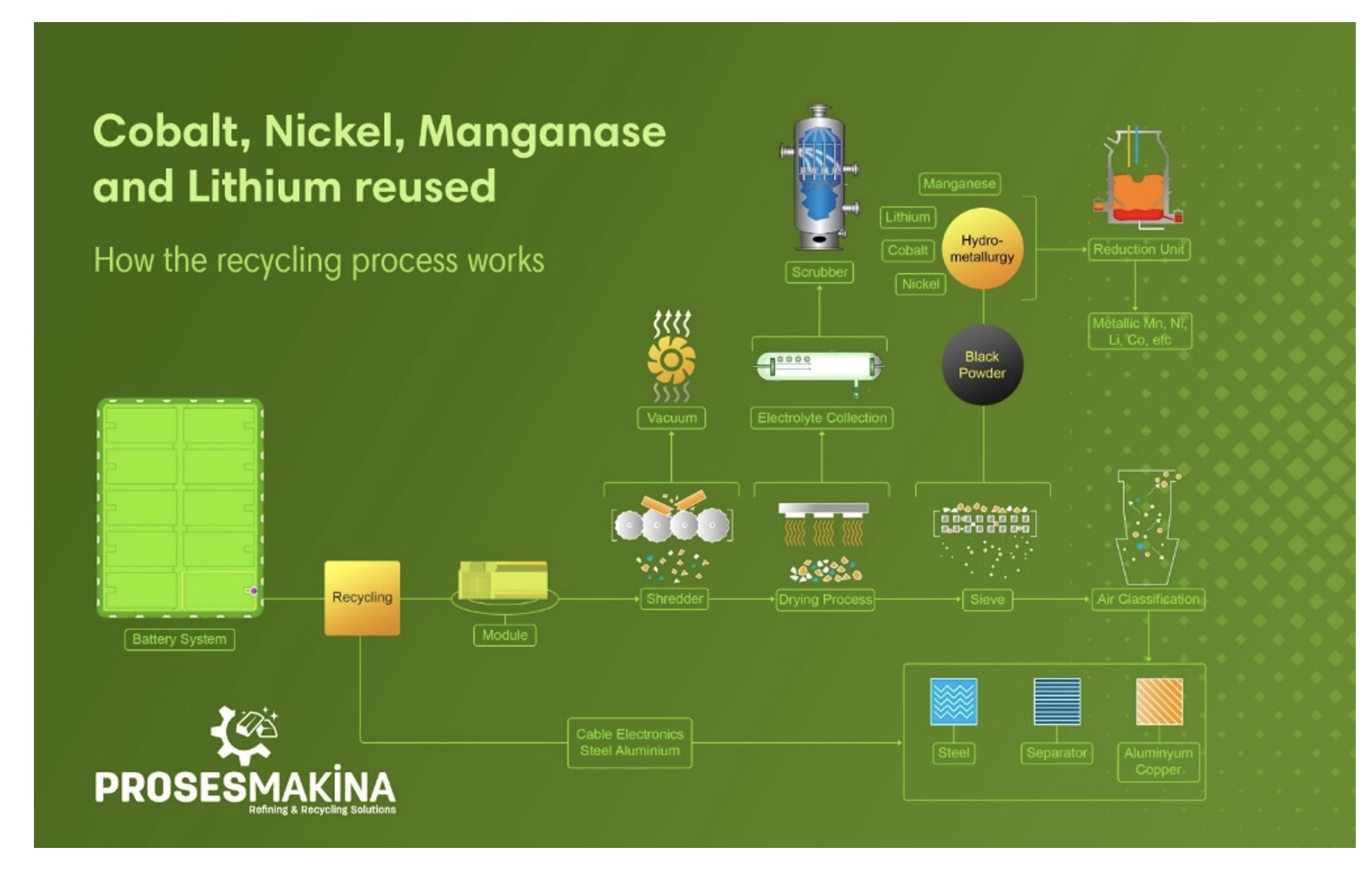 Atalay Kul is Project Engineer of Recycling and Refining Systems and a Mineral Processing Engineer for Proses Makina Company. He can be reached at [email protected].