With its ability to easily handle challenging matrices, an optical emission spectrometer provides both accurate and stable results when analyzing additives in oils of different formulations and in-service oils in a high-throughput environment.

2. Oils specifically in use and not yet considered waste (and therefore not subject to EPA regulation) are defined as in-service oils

Used oils are managed under the regulations found in 40 CFR Part 279, unless they do not meet the criteria therein. In that case, they would likely be considered hazardous waste and subject to the regulations found in 40CFR260-270.2 In-service oil is defined by ASTM International’s Committee D02 on Petroleum Products, Liquid Fuels and Lubricants as lubricating oil present in a machine that has been at operating temperature for at least one hour. Millions of in-service oil samples are analyzed in laboratories every year to determine the chemical and physical properties and to determine if they are fit for use. If the oil is no longer fit for use, it will likely be removed from the machine and deemed to be used oil. This becomes subject to the 40 CFR Part 279 regulations. However, until a determination is completed, the oil samples remain classified as in-service.

Throughout the world, heavy machinery is used in a wide variety of industries, with some of the most prevalent being construction, mining, and marine and air transport. To optimize the performance and lifetime of the machinery, it is vital to monitor the metal content of the lubricants, both to indicate wear of certain components and to determine the optimum time when the lubricants should be changed.

To maximize an engine’s performance and life, a variety of metals may be added to the lubricants during the production process. Some of the most prevalent added metals to monitor include barium (Ba), boron (B), calcium (Ca), magnesium (Mg), molybdenum (Mo), phosphorus (P), sulfur (S) and zinc (Zn). Each metal has a specific purpose. For example, Ca and Na consume acids which may enter the oil, while P and Zn are parts of larger organic compounds that are added as detergents, corrosion inhibitors and anti-wear agents. However, not all these elements will be added to every lubricant. The optimal combination of metals and their concentrations depends on the final use. As a result, many different additive formulations exist. Because of their importance to extending engine life and performance, ASTM has developed a method specific to the analysis of additives to lubricants: Method D4951.3 Elemental analysis is most commonly performed using either X-Ray analysis or Inductively Coupled Plasma-Optical Emission Spectroscopy (ICP-OES) instruments, with each technique having both advantages and limitations.

Once lubricants are added to heavy machinery, their metal content should be checked periodically to monitor the condition of the machinery and to determine when it is necessary to change the lubricant. The increase in concentration of key wear metals provides an indication of when maintenance is required. To address this important diagnostic, ASTM Method D51854 was created for the analysis of in-service oils and lubricants using ICP-OES.
Below is a discussion of the analysis of both oil additives and in-service oils following ASTM methods D4951 and D5185.

Experimental
Samples and Sample Preparation
Samples included both new and in-service oils, which were diluted 10x with V-Solv (refined kerosene) containing 40 ppm cobalt (Co) as an internal standard. Quantitative measurements were obtained against external calibration curves made from V-23 (commercial organometallic standard) stock solutions diluted to the appropriate concentrations (50, 100, 500 ppm) with V-Solv, with 75 centistoke (cSt) base oil serving as a blank. Co (40 ppm) was also added to the blank and calibration standards. 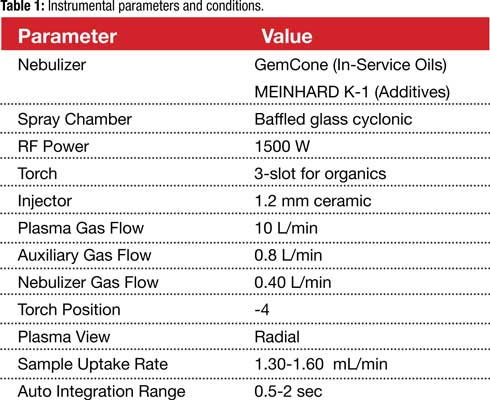 Quality control (QC) was carried out by running known check standards periodically throughout the analyses. For the additives in oil, a four-component standard (containing the elements of interest) was run every five samples. During the analysis of in-service oils, a check standard (50 ppm for analytes plus higher levels of the additives) was analyzed every 11 samples.

Experimental Conditions
All analyses were performed on an optical emission spectrometer system (ICP-OES). Because of the small number of analytes and the typically low daily sample load of oil blending plants, the system was used for additive analysis. Because labs analyzing in-service oils usually have larger numbers of samples to analyze daily, this system was used in conjunction with an ASXpress Rapid Sample Introduction System (Figure 1) to further increase sample throughput. For labs with low sample throughput requirements, the optical emission spectrometer system is also appropriate for in-service oil analysis.

Instrumental conditions for both analyses are shown in Table 1. Because both analyses are similar, nearly identical instrumental conditions were used, with the only difference being the nebulizer type. Due to the high sample throughput requirements and the potential of particles in in-service oils, a GemCone nebulizer was used for this analysis as it is highly resistant to clogging. In addition, the ASXpress was not used for the oil additives because sample throughput is not a concern. Table 2 shows the elements and wavelengths used for both analyses.

Results and Discussion
Advantages of ICP-OES
An optical emission spectrometer is the ideal technique for monitoring metals in oils for three reasons: matrix tolerance, concentration range and simplicity. Because ICP-OES looks at light emitted from a sample, the sample matrix itself never enters the instrument, meaning that there is no matrix deposition within the spectrometer (which can occur with ICP-MS, as matrix deposits on interface cones and may deposit on ion lenses). As a result, dirty samples (such as in-service oils) can easily be measured with the appropriate nebulizer. However, one concern exists: the deposition of carbon on the injector and spectrometer interface. With the proper choice of plasma argon flows, carbon formation on the injector tip can be minimized. Different strategies are employed to prevent or manage carbon deposition on the spectrometer interface. The instruments used in this study use a shear gas, a flow of air perpendicular to the plasma between the top of the torch and the interface. This effectively cuts off the top of the plasma, removing carbon before it can reach the interface. Figure 2, shows the plasma during aspiration of an oil sample, with the shear gas flow highlighted.

When monitoring both oil additives and wear metals in oils, trace metal analyses are not required. Additives to oils are present at high concentrations (typically greater than 100 ppm), while for in-service oils, diagnostic concentrations are 1 ppm or higher. These concentrations are easily measured with ICP-OES.

Because of the relatively small number of additives in oils, X-Ray analysis has also been used. However, compared to ICP-OES, X-Ray techniques have several disadvantages, with the most important being interferences. While ICP-OES does not have any interference from petrochemical samples on the wavelengths listed in Table 2, X-Ray techniques have interferences requiring either physical or mathematical corrections, both of which necessitate additional standards to be analyzed. As a result, the analyses are more complex and time consuming than with ICP-OES.

Analysis of Oil Additives Following ASTM D4951
Four new oil samples with different formulations, which had previously been run by X-Ray, were analyzed by ICP-OES, and the results were compared. As shown in Figure 3, both analyses yielded similar results, demonstrating the accuracy of ICP-OES. An advantage of ICP-OES for these analyses is the precision: each measurement had relative standard deviation (RSD) of 1 percent or less, except for Mg in Oil 3, where the low concentrations resulted in statistically higher RSDs.

Analysis of In-Service Oils by ASTM D5185
Using the parameters and conditions in the Experimental section, the sample-to-sample analysis time for in-service oils is about 25 seconds, which includes measuring the 22 elements specified in the D5185 as well as the internal standard. With healthy engines and fresh oil, most wear elements are present at less than 1 ppm. However, in a typical batch of samples, the concentration of certain elements will vary significantly, indicating differing wear of the engines. Figure 5, shows the variation of seven elements selected from 10 random samples during a six-hour run consisting of more than 300 samples. The data clearly show wide variations between samples (such a Ca and Zn), as well as some elements (Cu, P), which are fairly consistent between samples. Within these seven elements and 10 samples, the measured concentrations ranged from less than 1 ppm (Cu in Oil 1) to more than 1000 ppm for several elements in several samples.

The stability of the analysis was evaluated by measuring a QC standard after every 11 samples. Figure 6 shows the recoveries for all elements in all the QC samples measured during a six-hour run consisting of more than 300 samples. With all elements recovering within 10 percent of their true values, the stability of ICP-OES for the high-throughput analysis of in-service oil samples is demonstrated.

Conclusion
This research has shown how ICP-OES can be successively applied to the analysis of petrochemical samples. With its ability to easily handle challenging matrices, ICP-OES provides both accurate and stable results when analyzing additives in oils of different formulations and in-service oils in a high-throughput environment, following ASTM methods D4951 and D5185.

Ken Neubauer is Senior Application Specialist, Inorganic for PerkinElmer, Inc. (Waltham, MA). He can be reached at [email protected].

VLS Recovery Services, LLC Expands Waste Services into the Midwest and Mid-Atlantic with Acquisition of ERC

US Department of Labor Announces Enhanced, Expanded Measures to Protect Workers from Hazards of Extreme Heat, Indoors and Out