This year has begun with progressive and impactful strides toward food waste reduction, continuing the momentum from the past and setting the precedent for the future. However, there is still a long way to go to reduce food waste completely.
By Matthew S. Hollis

As 2019 is more than halfway over, it is important to reflect on the waste industry’s progress thus far—especially when it comes to food waste. This year has seen an influx of legislation, technology and upcycling movements to tackle the food waste epidemic facing the world. The waste industry and consumers alike are motivated to continue this forward momentum to reduce food waste.

Legislation
Food waste has been a recent topic among both federal and state legislative bodies across the country. At the federal level, the Trump administration recently announced that this past April was Winning on Reducing Food Waste Month. The U.S. announced its goal to cut food waste in half by 2030. The administration revealed a six-prong strategy to reaching this goal: interagency coordination, consumer education, measurement, food safety and labeling, private industry collaboration and waste reduction at federal facilities.

At the state level, several governments are also creating policies aimed at food waste reduction. For example, a New York state budget was recently passed that included mandatory food waste recycling or donation for facilities that created an annual average of two tons of food waste per week. Additionally, New Jersey lawmakers created a Food Waste Task Force to identify and examine factors leading to food waste and identify potential solutions. The Solid Waste Authority of Central Ohio (SWACO) has revealed a plan to halve food waste by 2030 in an attempt to leverage food waste to the region’s benefit.

Label standardization is a related issue that has come up throughout 2019 regarding food waste. The U.S. wastes anywhere from 30 to 40 percent of its food supply, and meanwhile, millions of Americans live in food insecure environments. Many experts believe that the nonstandard date labeling of food has contributed to this disparity, as perfectly safe food is being thrown away. Consumers and retailers alike are often confused by the difference between various date labels (best by, sell by, use by, best before, etc.). While there is no federal standard that manufacturers must adhere to, several states, including Massachusetts and New Jersey, have begun considering legislation to standardize their date labeling system in an effort to provide clarity for consumers and decrease food waste. Most recently, the FDA has thrown its support behind the voluntary use of “best if used by” to eliminate customer confusion and decrease the amount of food waste created. 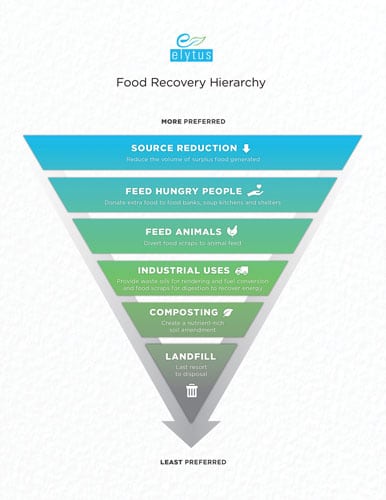 Technology
As food waste becomes a more pressing and apparent issue, several technology-based solutions have cropped up as a result. From sourcing to disposal to donation, several touchpoints of the food waste lifecycle can be improved through the use of this progressive technology.

Sometimes the path to food waste reduction can begin at the site of disposal. In large commercial kitchens, smart disposal bins may hold an opportunity to waste less. Smart kitchen technology providers like Winnow have created AI-based food waste bins. These bins use scales to weigh food waste and a touchscreen where operators can log what is thrown away. Another such company, Leanpath, employed its data-driven approach to food waste in Google cafes across the globe and announced earlier this year that the initiative has saved more than 6 millions pounds of food from going to waste.

Donation can also be a useful method to divert food waste from landfills. According to Rethink Food Waste through Economics and Data (ReFED), the use of donation-matching software has the potential of diverting 150,000 tons of food waste, reducing up to 555,000 tons of greenhouse gas emissions. Growing software platforms such as Spoiler Alert, Zero Percent, Olio, Copia, Community Plates, and Food Cowboy all aim to fight food insecurity and reduce food waste by matching surplus food and organizations that accept donations. One new app called Food Rescue U.S. launched in 2019 and seeks to rescue food and serve the hungry population in the Salt Lake area. Another app, Cropswap, connects home gardeners with others who want to sell, swap or donate hyperlocal produce. Keeping food local eliminates the energy to pack and ship products that are already being grown in the local area.

Upcycling
Another trend in the food waste space has been to repurpose food waste into something edible. These upcycling initiatives have proven to be effective at reducing food waste and turning a profit. For example, Kellogg’s is making use of its rejected cornflakes by using them as a sweetener and coloring agent for beer. Los Angeles-based startup Pulp Pantry has created a method to repurpose juice pulp and turn it into grain-free granola. Barnana is a startup that transforms irregular bananas from farms into simple banana-based snacks like plantain chips, brittle and more. According to a recent report, upcycled food waste is worth approximately $46 billion in 2019; these companies and many more like them are participating in retrieving some value from food waste.

So far, this year has begun with progressive and impactful strides toward food waste reduction, continuing the momentum from the past and setting the precedent for the future. However, there is still a long way to go to reduce food waste completely. Whether the advancements are policies, new technology or upcycling movements within companies, many eyes are looking to the food industry for the next steps. If you are interested in learning more, various organizations such as the Food Waste Reduction Alliance (FWRA) and Rethink Food Waste through Economics and Data (ReFED) have resources and information on steps you can take to curb food waste. | WA

Matthew S. Hollis is the President of Elytus (Columbus, OH), an innovative waste management company committed to helping their clients #wastenothing. For more information, visit www.Elytus.com or see them on social media @Elytus.

AI, Robotics, and Data Capture: Now and Next