Despite the seeming opposition to LEED certification in some states, the truth is that green construction practices are here to stay.
By Tommy Linstroth

Green standards for public and commercial construction projects in the U.S. are far from universal. As a result, businesses in the recycling and waste industry can end up dealing with a patchwork of different requirements.

Different Approaches
State and regional approaches to green construction can vary widely. More than half of the states have put formal green construction requirements in place during the past decades. Many of them require that construction projects achieve Leadership in Energy and Environmental Design (LEED) certification.

LEED has also been embraced in thousands of cities in the U.S. Over the years, though, a handful of states, including Alabama, Georgia and Mississippi, have passed legislation prohibiting the use of LEED certification in certain circumstances.

Although these legislative actions can certainly sound dramatic—as headlines warn of states “banning” LEED certification—the measures end up being mostly symbolic. For instance, spurred by economic concerns, the Georgia General Assembly passed a law that limited LEED certification for state-owned buildings. As the Atlanta Journal-Constitution wrote when the law passed in 2015: “The “wood wars” battle over the national certification system comes as the state’s timber industry claims it discriminates against the use of local wood products that aren’t registered through the Forest Stewardship Council. According to the Georgia Forestry Association, only about 32,000 acres of the timber industry’s 20 million acres in Georgia currently meet that standard—since much of the industry here uses competing guidelines.”

The results? It has not really curtailed the pursuit of LEED certification in the state. Private development is exempt from the law, and municipalities like Atlanta fully support LEED certification. In fact, Atlanta became the 100th LEED-certified city in the world in 2019, an accomplishment that the U.S. Green Building Council has publicized: “Atlanta is showing the world that through sustainability, cities and communities can take meaningful steps toward improving the standard of living for all residents,” said Mahesh Ramanujam, President and CEO, U.S. Green Building Council, in a press release announcing the accomplishment. “Through LEED, the city is prioritizing efforts that are not only good for the planet, but good for people too … Atlanta’s LEED certification will also inspire other cities and communities to strive for a more sustainable future.” 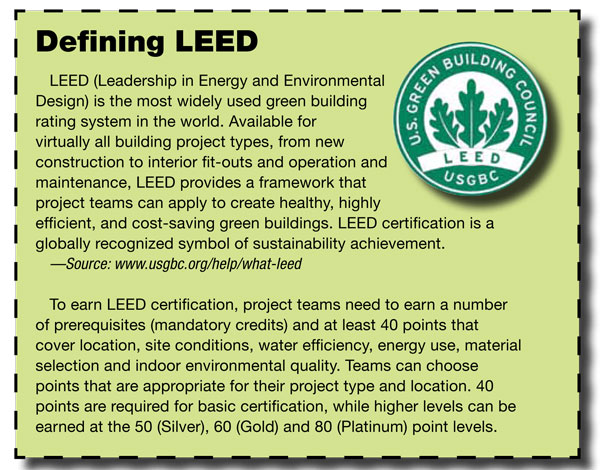 Differing Standards, Same Goal
For state governments, the question of whether to use LEED really often comes down to a simple debate: “Do we need additional certifications or can we, as a state, manage this verification process ourselves?”
Despite the seeming opposition to LEED certification in some states, the truth is that green construction practices are here to stay. States often require green construction standards to be used, whether homegrown or using a certification system like LEED or one of the many other alternative rating systems. For example, the Georgia state government, which does not allow the use of LEED for state projects, created its own standard called the Georgia Peach Green Building Rating System. Like LEED, the system requires waste reduction, locally sourcing materials, and water conservation measures. So, even states that are not necessarily endorsing LEED are still putting green construction practices and requirements into place. Because in this day and age, everybody knows it just makes sense.

Waste and Recycling Issues
The patchwork of regulations includes differing waste reduction and recycling standards. On the LEED site, waste reduction is one of the most commonly achieved strategies for construction firms working towards certification. Changes in LEED v4.1, which is expected to be ratified later in 2020, make it easier for companies to receive credits for co-mingled recycling.

Co-mingled recycling is, by far, the least labor-intensive waste diversion option for construction companies to use. Most sites do not have room to have five separate material dumpsters. It is much more convenient to have one dumpster onsite. Teams can throw everything into it, and then have it hauled off and sorted at a recycling facility.

Co-mingling, however, does pose an additional certification challenge for construction companies. To meet LEED standards, the construction waste needs to be sent to a facility that is certified by the Recycling Certification Institute (RCI). Waste and recycling companies that take a detailed approach to documenting their diversion rates and receive third-party verification of their practices will be more attractive to businesses seeking LEED certification.

Never Stop Learning
One issue that anyone interested in green and sustainability standards has to keep in mind is that the regulatory environment is not static. The standards continue to evolve even after state and municipal governments have put in place laws and regulations governing their use. As standards change, they can grow tighter and thresholds can become more challenging to reach than when regulations were originally put in place. Anyone interested in green construction or involved in the waste and recycling industry has to be able to keep up with the latest changes in these standards and regulations or risk falling behind. | WA

Tommy Linstroth is Founder and CEO of Green Badger (Savannah, GA), a cloud-based solution for equipping project teams of all levels of experience with the tools they need to document LEED as efficiently as possible. For more information, visit https://getgreenbadger.com.

California Carpet Differential Assessment Will NOT Increase on January 1, 2023