How Much Does my Landfill Leak?

The question of how much landfills leak might be the most contentious question in the solid waste industry and the one with the most elusive answer. Leakage can be predicted using models of varying levels of sophistication, but modeling relies on accurate data for hole frequency and size. Published statistics for hole size and frequency vary widely and most of the published data is drastically out of date and out of context for construction practices in North America. The prescribed method of monitoring existing landfill leakage through single-lined landfills is through a groundwater monitoring network, but once contamination is detected it is already too late. The only feasible way of remedying the problem may be to cap and close the portions of the landfill that are leaking, which may jeopardize crucial operating revenue. In extreme cases, groundwater remediation may be required, which is costly and may or may not be effective depending on the hydrogeologic conditions(the types of soil under the site and how the groundwater flows through them). The obvious solution is to build landfill liners that don’t leak, but the simple laws of chemistry and physics, not to mention Murphy ’s Law, preclude this possibility.

An estimate of landfill leakage is often calculated indirectly using the Bernouilli or Giroud equations if the hole size and frequency are known (Giroud et. al., 1997). Leak frequency and size statistics are generated from the results of geoelectric leak location methods. However, published leak location statistics come from various leak location methods on various applications in many different countries with highly varying and sometimes nonexistent, construction quality assurance (CQA). All of these conditions affect leak frequencies greatly. Average hole size and frequency contributing to leakage depends heavily on the skill of the liner installer and the skill of the CQA agency. Several studies have shown the significant reduction in hole frequencies and leakage in the presence of CQA during construction (Forget et. al., 2005, Bonaparte and Gross, 1992). This concept can be expanded to an improvement in construction quality with rigorous CQA as opposed to poor or inattentive CQA. Since standards and minimum experience qualifications are relatively high for landfill expansions in the U.S., in my experience, the average hole frequency is far less for landfill expansions in this country than in most other applications in other parts of the world. That being said, hole frequency does not always translate directly to leakage rates, since the types of damage typically created during placement of the cover material, such as ruts from dozer tracks, rips and scrapes from dozer blades, and rocks pushed through the liner, can be far more significant for leakage rates than knife slices or pinholes occurring during liner installation.

Whether or not holes are created by equipment placing cover material depends on the placement method and the care in which the method is executed. It also depends on the quality control of the cover material and whether or not the material has been screened. Finally, it depends on the level of care of the CQA technician watching placement of the cover soil material. Tremendous care is given to the placement of the leachate collection and recovery system (LCRS) drainage layer and operations soil layer over landfill liners. Damage attributed to cover soil placement is rarely found in the landfill industry in my geoelectric survey experience of landfill expansion cells since 2004, contrary to old statistics that claim that 74 percent of liner damage is caused by placement of the cover material (Nosko et al, 1996). When oversized particles are not controlled in the cover soil, punctures can and will happen to a geomembrane. Figure 1, taken at a water reservoir, is an example of this.

Double-lined landfills provide the most accurate measurement of geomembrane leakage because the leakage through the primary geomembrane can be collected and quantified in the secondary containment system. Two published studies provide a comprehensive evaluation of landfill leakage through the primary liner—one study funded by the EPA in 1992 (Bonaparte and Gross, 1992) and a more recent study of leakage in the state of New York (Beck, 2012). The 1992 study showed average leakage data through the primary geomembrane from 14 landfill cells where CQA had been performed during installation. The 2012 study focused on the maximum monthly leakage values, so the published data cannot be directly compared to the 1992 data.

Previously unpublished data of average annual leakage rates from the 2012 study is presented here for the first time, allowing for a direct comparison between average landfill leakage statistics in 1992 and average landfill leakage statistics in 2012. Annual average leakage data from 37 double-lined landfills comprising 128 discrete landfill cells in the state of New York from the reporting year 2010 was organized into the same leakage bins as the 1992 Bonaparte and Gross study. The 2012 data includes several landfill cells, which had dipole surveys performed as part of cell construction. The percentage of landfills falling within the given leakage rate ranges is shown in Table 1 from the data collected in 1992 and the data collected in 2012. As a result of advances in installation quality and CQA practices, leakage rates greater than 50 liters per hectare per day (lphd) have decreased significantly in the past 20 years. It is therefore inappropriate to rely on old leakage data for estimating leakage through geomembranes using modern construction techniques

The best available technology for locating leaks in geomembranes before they become a problem is geoelectric leak location methods, also known as liner integrity surveys. These methods are covered by ASTM methods D6747, D7002, D7007 and D7703. The methods for exposed geomembranes (ASTM D7002, D7703) can be used to locate holes in the geomembrane immediately after geomembrane installation. The bare geomembrane methods are sensitive enough to locate pinholes. The dipole method (ASTM D7007) is used after placement of the cover materials. Ideally, a bare geomembrane method would be used after geomembrane installation, then the dipole method would be used after placement of the cover materials. In this way, the very small holes created during liner installation could be located and repaired, then the dipole survey can locate any holes that might have been created during cover soil placement.

ALRs vary from State to State but unless a landfill is completely double-lined, there is no way to immediately measure how much a single-lined landfill is leaking. Sites can only mitigate future risks by creating good specifications, upholding standards, hiring reputable installers and CQA agencies, and specifying a geoelectric leak location survey as a final check for liner integrity.

Abigail Beck is a Senior Engineer and Director of the Liner Integrity Services Division of TRI Environmental, Inc. She has more than eight years and 70 million square feet of geoelectric leak detection survey experience and has authored over a dozen technical papers and articles. Abigail can be reached at [email protected] 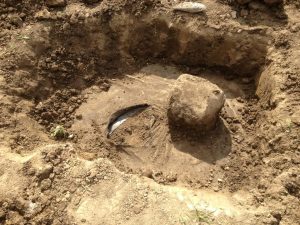 Damage to polypropylene geomembrane from oversized particle found during a geoelectric leak location survey over cover soil at a water reservoir.

Distribution of average landfill leakage rates. (a) Year Data was published; (b) Liters per hectare per day; 1 gpad = 9.3 lphd. 1992 data

Table courtesy of Bonaparte and Gross, 1992.