Instead of pumping leachate to an offsite treatment plant for disposal, electro-oxidation may be a viable alternative.

Landfill leachate treatment is a major engineering challenge due to the complex and concentrated contaminants within it. Depending on the age of the landfill, weather variations, and type and composition of the waste, leachate may contain large amounts of organic matter, ammonia-nitrogen, heavy metals, and chlorinated organic and inorganic salts.

Most commonly in North America, landfill leachate is either hauled or pumped to offsite municipal wastewater treatment plants for disposal. However, due to high ammonium concentrations, especially in the summer season, leachate disposed to offsite facilities has been a problem for plant owners. This is due to more stringent effluent discharge criteria, as well as interference with biological processes at the plants.

Physical/chemical processes include flotation, coagulation-flocculation and chemical oxidation. However, these treatment methods are not considered effective in handling the excessive amount of ammonium compounds present in leachate. 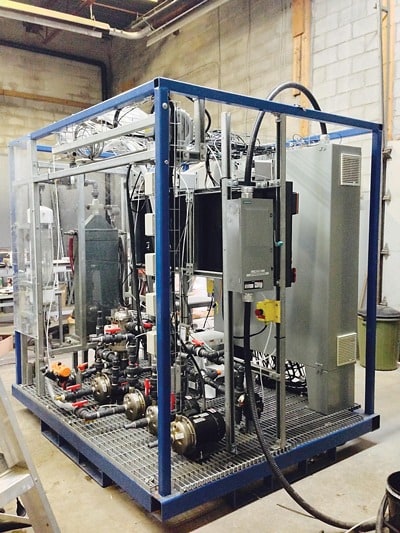 Electro-Oxidation as a Promising Leachate Process

Electro-oxidation is fast becoming a promising process for removing ammonium from landfill leachate. Degradation of ammonium can be achieved by an indirect electro-oxidation process. With the presence of chloride ions in the leachate, hypochlorite ions can be produced by electro-oxidation, which reacts with a wide variety of nitrogen compounds.

A pilot-scale leachate treatment system using electro-oxidation technology was designed, built, installed and tested for onsite ammonium reduction.1 The purpose of the pilot project was to demonstrate an ammonia concentration reduction from more than 400 mg/l to less than 200 mg/l, operational consistency with stable performance 24/7 over a three month period and a treatment cost of less than $0.001 per liter.

Leachate treated in this pilot project was collected onsite from a sanitary landfill. It was required to treat its leachate because of the high concentration of ammonia in sewage sludge accepted for several years. Increases of ammonia concentration in the leachate of the landfill since 2007 were observed. Although sewage sludge was no longer sent to the landfill, its leachate remained high in ammonia. In 2010, the owner was directed to reduce ammonia levels to less than 200 mg/l from more than 400 mg/l.

The electro-oxidation reactor consisted of an array of anodes and cathodes spaced closely together. The design treatment capacity of the unit was 3.8 lpm. A programmable power supply was used to supply power to the electro-oxidation reactor. The treatment system was controlled by a Schneider Electric programmable logic controller and was designed to run automatically without the presence of an operator. A human-machine-interface was designed and built by Versatech of Mississauga, ON, to operate, control and monitor the process.

The pilot plant was operated continuously for three months. Ammonium concentrations in the treated leachate effluent varied from 69 mg/l to 196 mg/l, depending on the settings of power capacity and retention time.

Larger power capacity provides a stronger driving force for the reaction of ammonium reduction through electro-oxidation. Since the reaction consumes alkalinity, pH drop was also identified in the treated leachate. The pH level was reduced from 7.6 in raw leachate to 6.4 at 1.9 kW. It was further reduced to 6.27 at 2.6 kW. By raising the power to 3.3 kW, pH was reduced to 6.1.

There are two components to the operational cost of the pilot-scale electro-chemical oxidation system: electricity to power up the electro-oxidation reactor, and a scaling control agent to remove deposits from electrode surfaces.

Chumeng Wu is with Xogen Technologies Inc. (Orangeville, ON). Chumeng is a process engineer with more than five years of experience in wastewater engineering in Canada. He has executed multiple wastewater projects with innovative biological nutrient removal and advanced oxidation processes. Chumeng has worked on projects dealing with different kinds of wastewater, such as landfill leachate, mining effluent, municipal sewage and sludge centrate. For more information, contact Angella Hughes at a[email protected].

Sanitation Crews in NYC Honored for their Work After September 11