On the road trying to make a living with a full-time job, I constantly worried about my two boys, ages 20 and 23, driving refuse and recycling routes. I was a mess thinking about the possibility of them getting seriously injured by a vehicle while chasing down fly-away litter that didn’t make it into the truck with the automated arm. We had to quickly find a solution.

My oldest son had just graduated from college with a Business Management degree. He asked me what recommendations I had regarding finding a job. He was ambitious, hardworking and smart. I told him to
figure out what his passion was and start a company.

Adam only knew the solid waste and recycling industry as he grew up watching his dad sell carts for over 20 years for a large U.S. cart manufacturer and so, Adam decided to get his CDL and start a local hauling company.
While building his business plan, one of our concerns and priorities was driver safety, specifically, since my son, and later both of my sons, would be driving. I explained to Adam the importance of automation, not only for efficiency but also the importance of driver safety. Servicing carts with an automated arm keeps the driver in the truck the majority of the time on a route, therefore, preventing the driver from having to get out of the truck and possibly slipping and falling or even worse, getting struck by a vehicle.

After long discussion and research, Adam decided to purchase dual drive residential front load trucks with curotto cans. The curotto can has an automated arm on the right side and the dual side drive would allow the driver to exit curbside when necessary, adding additional protection from oncoming traffic.

Soon after running routes daily, Adam quickly realized he had a couple major problems. Not only were carts being blown over scattering garbage and recycling across neighborhoods, but also when servicing carts not all of the garbage was making it into the curotto can. Not only was litter blowing out shortly after lifting the cart from the curb with the lids opening prematurely, but also right before entering the curotto can. Recycling was even more of a problem since it fits loosely in carts. Adam found himself spending the majority of his route outside the truck chasing down fly-away garbage and recycling while trying to stay safe from getting injured.
He also noticed that his hauling competitors were experiencing the same problems with all different types of automated trucks. Carts were blowing over and 100% of the garbage and recycling wasn’t making it into the truck bodies when the carts were being serviced.

Adam paid close attention to the complaints by phone and on social media and made sure his business wasn’t littering his small, beloved community by spending more time chasing down fly-away litter coming from his carts and trucks. He realized he needed to do something about the major problem and wanted to have a positive impact. Adam’s business was quickly growing in the small community and the addition of another driver was needed. So, he hired his younger brother Jacob. With both sons driving routes daily, gray hairs were adding up on my head worrying about the safety of my sons whom I love and adore. A solution had to be found immediately.

After weeks of research, we weren’t successful finding a latch that auto-released without the driver having to physically get out of the truck to unhook it. The steel gravity locks available were not cost effective and would corrode over time. After further research, Adam and I believed we had a solution, the SafeWaste auto-release cart wind lid latch founded and made in New Zealand. (SafeWaste USA, LLC is American owned and operated.)

Adam quickly made a small purchase and attached SafeWaste latches to some carts. Bam! Finally, a cost-effective way with a non-corrosive productthat would not only keep the lid closed when blown over, but also when
the cart fully entered the curotto can and the lid released when 2.5-3 lbs. of garbage or recycling that came in contact with the lid. The SafeWaste latch not only solved the problem of Adam and his brother not having to get out of the truck to chase down fly-away litter, their route times also decreased immensely and they could service carts much quicker with the lid latched, improving efficiency considerably.

Soon, Adam quickly realized that the SafeWaste auto-release cart lid wind latch solved many problems for not only him and his brother, but also kept his dad’s hair from getting grayer! 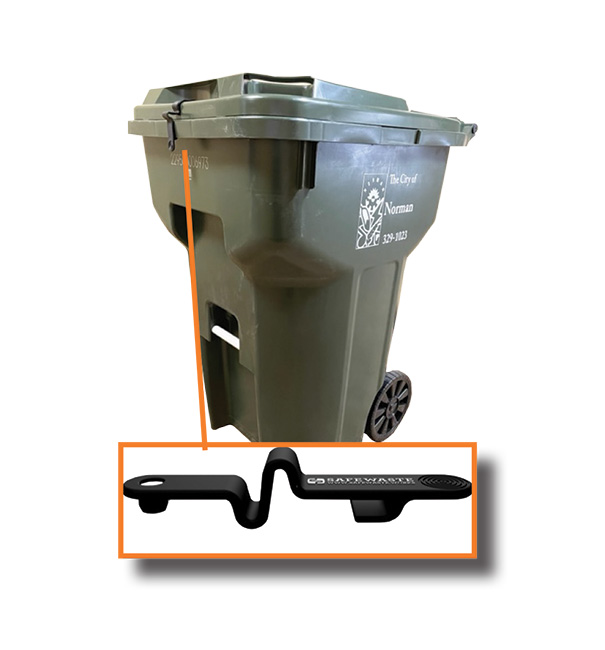 1. Cart lid stays latched until cart enters collection vehicles body, preventing early opening containing fly-away debris and resulting in the driver not having to exit truck.
2. Safety—keeps lid closed, preventing the lid from being blown open, eliminating injury to the homeowner or sanitation worker
3. Significantly increases wind stability resulting in fewer carts blowing onto streets
4. Prevents rodents/animals from entering; one latch on each side of the lid keeps racoons out
5. Controlling fly-away litter helps clean up our waterways and oceans
6. Improved residents’ waste collection expectations
7. Resident/customer has a sense of security when setting their cart out on windy days the night before collection day knowing the lid “sail” will not blow open
8. Health & Safety – controls fly-a-way COVID-19 PPE and other hazardous substances
9. Lid latch easily releases when 2.5-3 lbs. of force come in contact with the underside of the cart lid
10. Compatible with manual, semi-automated, and automated collection
11. Auto-releases latch when emptying into collection truck
12. Reduces blocked stormwater drains and pipes from fly-away litter
13. Improved environmental outcomes—reduces carbon footprint
14. Reduces landfill costs—SafeWaste latch keeps cart contents dry during inclement weather