Day two of the Northeast Recycling Council’s Fall Conference opened once more with an introduction by Lynn Rubinstein, the organization’s Executive Director, thanking all of the attendees, sponsors, exhibitors and the distinguished and sustaining members of NERC, for supporting the event. Session Facilitator, Rick Watson, CEO of the Delaware Solid Waste Authority and Treasurer of NERC, introduced the first speaker, Adina Renee Adler, Assistant Vice President of International Affairs for ISRI. She spoke on the Basel Plastics Decision and the current amendments, stating that the driver was deciding to do something about end-of-life plastics. She pointed out that rather than blaming and restricting trade as a result of plastics in the ocean, they should acknowledge that it is really more of a problem of mismanagement of materials in other countries. Currently, there are 187 parties (U.S. not included) in this organization and it was entered into force in 1992. In May, they had a Conference of Parties where they started with a proposal by the Norweigan Government to amend the convention to put restrictions on plastics, create a partnership for plastic waste that would involve public/private stakeholders and trade controls are put into place for certain types of plastics. Entry B3010 and B3011 have also made a lot of changes, especially addressing that plastics have to be designated for recycling in an environmentally sound manner. So what does this mean to recyclers? Adler explained that this ruling could be imposed on any material, negotiators are plugging loopholes, they are better defining the parameters and going beyond just dealing with litter. 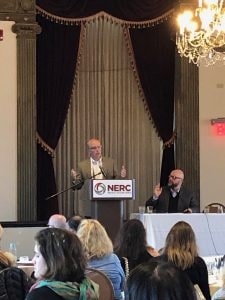 The second session, The Value of Plastics, was introduced by Steve Alexander, President and CEO of the Association of Plastic Recyclers. The speaker was Dylan De Thomas, Vice President of Industry Collaboration for The Recycling Partnership. He covered the challenges that the organization faced and pointed out that only half of Americans at home can recycle as easily as they can throw something away, while those that can recycle easily only recycle half of what they should. De Thomas explained that recycling is raw material and feedstock for the industry, material that is going to be reused into something else; environmental benefits are engaged when the recycling material is turned into something new. The Recycling Partnership recently released a Bridge to Circularity Report, which covered initiatives that they were currently working on, including the ‘Pathway of Recyclability’, commenting that the speed of packaging innovation has outpaced the capabilities and ‘Unlocking Supply Markets’, explaining that in its current form, the U.S. can’t deliver enough feedstock and we need to get material into systems to turn it into new materials. De Thomas predicted what was next for recycling – plastic reclaimers buying and building PE, LDPE, Post-industrial, etc.

Strategies for Recycling Education, introduced by Terry Laibach, Section Supervisor at the New York State Department of Environmental Conservation, featured Beth Gringold, Founder of the Recycler Leaders, who spoke about what the Washington, DC area students were learning about plastics. Education was being done via a Reduce First challenge, where students learned through civic action that single-use plastics are bad (emphasizing that there is a big disconnect between civics and engineering since single-use plastics are good in some capabilities). She talked about how students need to think about recycling in a more complex way – they need to learn how to ask the right questions and go through hands-on experiences. Gringold also stressed the importance of schools needing feedback and partnerships with Subject Matter Experts; programs should also engage custodians and cleaning staff, inviting them to learn from the programs and experience a tour through local facilities. She also suggested partnering with a high school student to be a recycling coordinator at their school, promoting both hands-on-experiences and direct job skills training. Rachel Bookman, Senior Communications Outreach Manager for ISRI, was also featured in the session, covering the association’s initiative goals and the science of recycling in the classroom (through partnerships, curriculum, video and poster contents, and community outreach). Some of the education activities through ISRI include Scrap Maps, Champions of Recycling, Scrap Titans (board game introducing the economics behind scrap recycling) and others. Currently, the programs have engaged 4,000 teachers and nearly half a million students around the U.S. 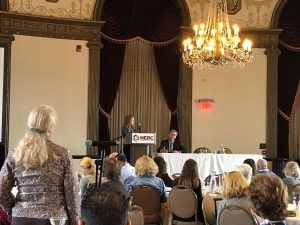 Christin Cassidy, Recycling Manager for Dart Container Corp. introduced the next session, Toxics in Packaging, which featured speaker, John Gilkeson, Chair of the Toxics in Packaging Clearinghouse (TPCH) and Principal Planner for the Minnesota Pollution Control Agency. He went through the history of packaging and discussed the goals of TPCH. It consists of state and industry association members, maintains/updates laws, coordinates implementation of states for consistency, and screens projects and publications. He went through the packaging test that they performed over the last two years and the results from plastic bags, goods bought overseas, and certain types of wine bottles. Gilkeson also covered the Maine Legislation that amended the Toxics Packaging Law in 2019, which prohibits the sale of food packaging with added PFAS chemicals. Currently, state members are testing and evaluating new chemicals. 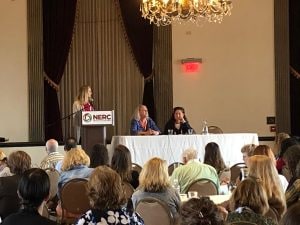 This led right into the day’s final session on a current hot topic in the industry – PFAS. Session Facilitator, Megan Pryor, Environmental Specialist for the Maine Department of Environmental Protection, introduced the two speakers, Terri Goldberg, Executive Director for the Northeast Waste Management Officials Association, and Debra Darby, Organics Recycling Consultant and owner of Darby Marketing. First up, Goldberg covered the groundwork for PFAS explaining that it is a burgeoning and huge environmental challenge. One of them is that we still don’t know all of its uses. Known as “Forever Chemicals”, PFAS is effective in repelling heat, oil and water. They are commonly used to manufacture non-stick, grease and resistant coatings on many industrial and consumer products, including food packaging and service ware. They are also used in aqueous film-forming foams, which are used to put out oil/gas fires. PFAS have been associated with cancer, developmental toxicity, growth/developmental delays in children, and other impacts. Goldberg also said samplings in the Northeast have found PFAS compounds in the landfill leachate, biosolids, sludge, soil, drinking water, wastewater, groundwater and surface water. There are regulatory standards in groundwater and drinking water (no consistency yet) in Vermont, New Hampshire, New Jersey, New York state, Michigan and Massachusetts. PFAS in service ware can migrate into food and can contaminate compost and crops. Currently, Washington state, Maine, California, and the European Union all have ban legislations in the works, while San Francisco’s ban goes into effect January 2020. Finally, Darby spoke about the testing that has been done in food take out containers, bakery and deli wrappers. Many of the samples had high flourine levels. She also talked about that Purdue University conducted a study of PFAS in compost, which led to the Healthy Food Packaging Act – H2658, and that most BPI certified compostable products (which play a pivotal role in the zero waste movement) do not contain flourinated chemicals. Darby also explained that more research is needed and ASTM is looking to develop a group in order to fill a void in industry standardization and provide methods to reduce PFAS worldwide. She covered that it is important for the waste and recycling industry to be alert to potential sources. They need to look upstream for industries that use these chemicals, communicate the value of all recycling efforts in place outweigh the risk from trace levels of PFAS, and steps need to be taken to minimize the unintended negative consequences. In addition, composting facilites should specify PFAS free food service ware in contracts.

It will be interesting to see how some of these issues play out within the next 6 months to a year and we look forward to seeing what will be on the agenda at the NERC Spring Conference, which will be held in Rocky Hill April 21 – 22, 2020!