Become informed of the benefits and risks of each option according to the type of waste you have and the applicable laws in the state where you do business. Doing so is the best way to balance our world’s thirst for energy with the need to protect our environment for future generations.

A famous proverb reminds us that “We do not inherit the earth from our ancestors; rather, we borrow it from our children.” With today’s technology, the drilling, completion and production of oil and gas necessarily co-produces several different types of waste. A responsible plan for managing these wastes is critical for protecting the environment and the health of those who work or live in the oilfield, as well as complying with government regulations.

Each different type of waste produced in the oilfield has several different alternatives for its disposal—which method is most appropriate for a particular location, operator and waste will vary.

Although oil and gas production has applicable regulations that may not classify them as hazardous, they do tend to leave behind substances that often have adverse health and environmental effects. Some of these oilfield wastes include:

Of these, produced water makes up the overwhelming majority of the volume of oil and gas waste. Produced water contains several components which complicate their handling and disposal, including:

The contamination level of drill cuttings and spent drilling mud depends on whether synthetic (i.e., oil-based) or water based drilling mud was used in the process. If synthetic muds were used, then there will be diesel-type hydrocarbon components in the wastes, including cyclic organic hydrocarbons (e.g., benzene). Water-based drilling muds are more benign, although they also include chemicals and salts.

What Does the Government Say?

The federal government’s Resource Conservation and Recovery Act (RCRA) exempts oilfield wastes from federal hazardous waste requirements, despite the fact that the same waste generated by, say, a refinery would be classified as hazardous. Regulation of the oil and gas industry is mostly delegated to the individual states, which ensure that state regulations comply with federal mandates. Not all states allow all disposal methods that can lead to different practices even across a single oilfield. Some are quite restrictive; for example, California requires testing of all wastes. Other states may not permit land spreading or pits in coastal areas.

An important consideration for oilfield waste management is understanding which disposal options are best suited for which types of waste. In general, the wastes classify themselves along a spectrum—dry solids on one end to solid free liquids on the other. Wastes at or near the endpoints of this spectrum enjoy the most ready options for disposal. Wastes in the middle often suffer from fewer disposal options or high processing costs to enable their disposal. The remainder of this article will focus on disposal options for various classes of solid wastes. Discussion of options for the processing of wastes in the middle of the spectrum or disposal of liquid wastes with low solids content will be addressed in a future article.

The most common disposal option for solid waste is a landfill, which can be commercially operated to receive third party wastes, or privately owned by a single operator.

Generally speaking, a landfill is an engineered earthen impoundment used for permanent disposal of a variety of municipal, industrial and hazardous wastes. Oilfield wastes may only be accepted by landfills with the required permit to do so. Moreover, certain oilfield wastes like Naturally Occurring Radioactive Materials (NORM) are subject to additional regulation with respect to what types of permits are required for their acceptance at differing levels of concentration.

Liquids present an issue for landfills. Fundamentally, landfills are designed to handle dry solids. That said, most waste types contain moisture content that must be controlled. Wet solids can be mixed with dry wastes to trap the moisture content, although this addition costs the landfill both space and time. Landfills are also almost always lined with clay or synthetic liners which prevent liquids from leaching out into the surrounding soils, allowing their capture for further treatment or disposal. Dust is another issue faced by landfill, which can be controlled using dust suppressants.

Pits, also called reserve pits when part of the drilling process, allow an operator to dispose of their wastes at the well location. Pits receive drilling wastes (muds and cuttings), flowback water, and other drilling and completion fluids and wastes. Depending on the jurisdiction and the conditions in the lease, pits can either be closed by excavating the materials for offsite disposal, or buried onsite. Several jurisdictions have rules allowing only the temporary use of pits, while some have banned pits entirely. These restrictions arise because of complications from the use of unlined pits, which may allow potentially toxic substances to seep into the ground. Moreover, if a pit is unfenced, wildlife and livestock can have access to the waste.

Lined pits are more common, but these too are not a foolproof method of containing the wastes. Pollution can occur via a rupture in the liner or if the pit overflows onto the surrounding area. 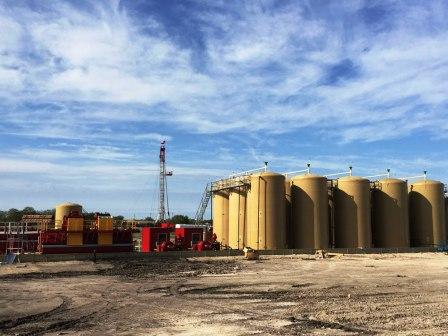 Land farming (sometimes called land spreading) is the application of wastes to the surface of the land over a large area. Landfarms are designed to reduce the concentration of hydrocarbons in the waste to safe levels by allowing the hydrocarbons to volatilize (evaporate) or by allowing microorganisms to feed on and digest the hydrocarbons. Tillage and composting practices to encourage hydrocarbon volatilization and biodegradation are designed to achieve the proper balance of moisture, nutrients and oxygen required to optimize microbiological activity. However, neither metals nor salts are treated and may reach concentrations that inhibit microbial activity, scar the land, or contaminate rain runoff or shallow groundwater.

Road base recycling of drill cuttings is allowed in some areas. With this option, drill cuttings are treated and stabilized to prevent leaching of hydrocarbons out of the aggregate so that it can be used as a substitute for road construction materials. However, the costs of these “recycled” materials are often high compared to traditional road bases, particularly if they are not used very near to the recycling facility. Because the permit rules often only allow the stockpiling of a certain amount of the recycled aggregate, several “recyclers” have been cited by regulators or shut down entirely because they have been unable to find a market for their product. Thus, due to the high cost of transport, these materials are most often used to construct oilfield pads or roads very near to the recycling facility.

Incineration and thermal desorption are two thermal technologies available for treating waste solids from oil and gas developments. High temperatures are used to combust or evaporate hydrocarbons from the waste material. However, additional treatment may be required to remove metals and salts before the residual ash or dirt can be disposed.

As its name suggests, incineration heats the waste in the presence of air to combust any hydrocarbons, usually in direct fired rotary or cement kilns. Thermal desorption, on the other hand, involves indirect fired rotary kilns, hammer mills, thermal phase separation or thermal distillation to vaporizing volatile and semi-volatile hydrocarbons, allowing them to be separated, re-condensed and sold. The economics of thermal desorption is highly dependent on throughput, the hydrocarbon saturation of the solids, the market price of oil/diesel, as well as the water content of the solids.

Thermal treatment plants are usually fixed facilities, though mobile treatment facilities have been developed. However, these mobile facilities suffer from high operating costs without steady feed.

Slurry injection is a favored technique for disposing of oilfield wastes because it enables the disposal of any oilfield waste whether solid or liquid. An EPA study from 1998, which evaluated slurry injection, stated that the technique “is the only disposal option that effectively removes waste from the biosphere.” Originally developed to close legacy pits on the North Slope of Alaska (where there were no surface disposal options), its use has grown over the years such that it is the standard practice for disposal of oilfield wastes in remote and environmentally sensitive environments. These environments include tundra, deepwater, jungles, marshy areas, congested urban settings, mountainous regions, protected wildlife breeding grounds and many others. In recent years, its use has begun in earnest within the mainline onshore oilfields as well due to several advantages over other solids disposal options, particularly its low capital and operating costs, small footprint and short permitting cycles.

With slurry injection, solids are classified by particle size and large particles are broken down into smaller ones or removed. The small particle solids are then mixed with liquid (produced water, emulsions, spent muds, seawater, brines or others) to form a pumpable slurry. The slurry is injected deep underground, usually a mile or more, below multiple layers of impermeable caprock, which arrest waste migration, thus allowing for the permanent sequestration of the waste materials. The technique requires the identification of appropriate geology and real time monitoring to ensure waste containment and storage volume optimization.

Salt caverns are another type of specialized injection facility. They are formed by hollowing out a large subsurface salt body. Fresh water is used to dissolve the salt to create the desired cavern geometry. The resulting saturated brine is pumped out of the created cavern and sold for industrial purposes or injected using traditional water injection wells. This solution mining process leaves behind an underground space in which pumpable materials, such as oilfield waste, natural gas or hazardous waste can be stored.

Whichever waste disposal option is ultimately selected is a function of waste type, regulation, cost, and environmental and community considerations. Become informed of the benefits and risks of each option according to the type of waste you have and the applicable laws in the state where you do business. Doing so is the best way to balance our world’s thirst for energy with the need to protect our environment for future generations.

Omar Abou-Sayed is the founder and CEO of Advantek Waste Management Services (Houston, TX), an oilfield waste management startup dedicated to preserving the environment for future generations. He received his Bachelor of Science degree in Mechanical Engineering from the University of Texas at Austin and his MBA from the Harvard Business School. Omar’s leadership experience spans the global energy, chemicals, oilfield services and renewables industries. For more information, visit http://advantekwms.com.

Some States Mandate Food Scrap Recycling. In Connecticut, Some Towns Do it Voluntarily.