Converting and changing your entire operation is a daunting one for any hauler. Thankfully with the advent of technology catching up with the ideas and needs within the industry, the decision to change to the safer front load system doesn’t have to break the bank.

The dumpster and containerized collection of refuse material revolutionized the waste industry in the 1940s with the introduction of the Dempster Dumpster. Since that time, the two main methods of emptying dumpsters from businesses, aside from the roll-off, have been with either a front loader or rear loader. Many smaller companies today still employ the rear load method due to the versatility of using them on combined residential and commercial routes. However, for these haulers, the cost and safety benefits of switching to a front load system seems daunting. Even more so for the hauler who uses front loaders exclusively for commercial collection and just acquired a rear load only company. Let’s do a breakdown below of the options these haulers have if they want to convert to front load collection.

The RL/FL two truck, two can, routing system grew out of the successful introduction of commercial FL technology more than 65 years ago. Once introduced, the FL technology routing model was gradually adopted because it was three to four times faster and required less personnel. Haulers also found it was far safer and easier to position the containers and consequently far more cost effective to implement, operate, schedule and maintain than the RL method.

As significant as these advantages were over RL, when the national companies started to buy up many of the smaller “mom and pop” haulers across the country, the total conversion to FL was slow to be adopted and the hybrid RL/FL two-pass route model became the go-to model and remains in many markets today.

This reluctance to change completely over to FL is due to the immediate and costly investment needed for new FL trucks and FL cans. Thus, the potential productivity and cost savings that could have been realized via total FL conversion were, and still are, not being realized (see Table 1).

Each can must be first emptied, taken out of service, transported to a welder, prepared for the retrofitting and then the welding itself. After welding is completed and downtime calculated, each converted container must be transported back to its original location.

If one chooses, to do the conversions onsite, the cost may be even higher than transporting the cans to the welder when accounting for the welder’s drive time from location to location. In addition to the welder, a truck and crew must accompany him to empty each can prior to the welding occurring onsite. It should also be noted that only up to 2 yard containers can safely be modified. Therefore, this makes this option not a financially viable or safe conversion model.

A conservative cost estimate for such a conversion is in excess of $150 per 2 yd. can. If one converts ten-100 can routes to this model, the cost would exceed $150,000 dollars, not including logistics, transportation and downtime. Then multiply these costs per retrofitted route (see Table 2).

This leads to our next model, the complete conversion to a total front-load operation and routing model.

In recent years more and more companies have bit the bullet and converted over to the Total Front-Load Commercial Service Model. New technology aside, this has been the smart move, even when one considers the immediate conversion expense to total front-load commercial model, which includes: 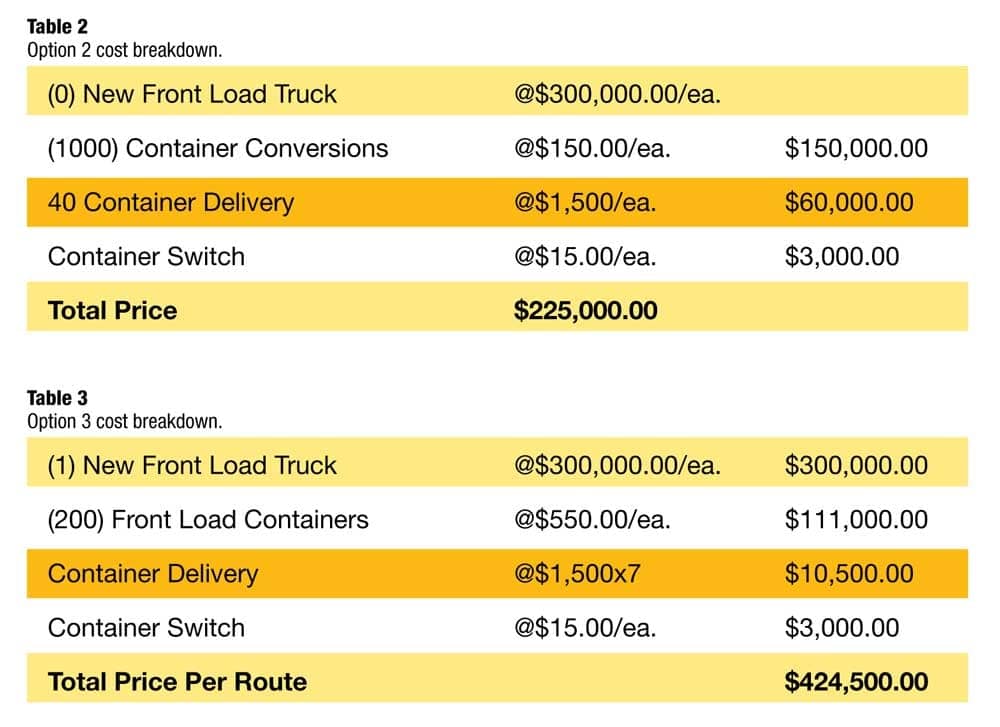 Even when one adds up the net lost investment of their rear load trucks and containers in addition to the added cost of the container liquidation, new container placement time and the retraining of drivers, this option without question looked to be the most compelling model for the haulers over the long haul.

While the design and operation of front and rear loaders have not really changed over the past 50 years in terms of how they function, innovation within this industry has come in the form of the modification and gadgets that are added to the trucks.

Converting and changing your entire operation is a daunting one for any hauler. Many of these options are factors when deciding to acquire certain haulers. Thankfully with the advent of technology catching up with the ideas and needs within the industry, the decision to change to the safer front load system does not have to break the bank.

Bob Sill is a founding partner and head of marketing at Johnny Jaws North America (Bethel Park, PA). Johnny Jaws makes the worlds first rear load container attachment that has been refined over seven years by inventor John Townsend and its team of partner engineers. Instillation requires no retrofitting of your truck and they help maximize your company’s uptime by having the install done on location when the truck is in the yard between routes. Bob can be reached at (412) 956-7930, via e-mail at [email protected] or visit www.johnnyjaws.com.

Rumpke to Take Over for City of Richmond, KY Waste Disposal in March

Minnesota Is Poised to Pass an Ambitious 100 Percent Clean Energy Bill. Now About Those Incinerators.