Putting the HAZOP to Good Use!

How risk assessments and mitigation measures used in the chemical sector can be just as effective when dealing with landfill gas fires.

The UK Chemical Industry has, for many years, appreciated the strategic use of Hazard and Operability (HAZOP) assessments in reducing the risks posed by their activities and sites. But what other industries can benefit from this approach? The landfill sector has just begun to demonstrate how the innovative use of the HAZOP assessment methodology can help underpin significant decisions on site operations as exemplified by the Mont Cuet landfill site on the Channel Island of Guernsey.

Signs of a subsurface landfill fire were noted on the only operational landfill site on the island in 2005—the indicators being steam and smoke issuing from boreholes and an area of collapse along one of the site boundaries. The operator and island government employed specialist consultants to investigate the potential causes and location of the fire and extinguish it as soon as possible to avoid any harm to site workers, residents, the environment and the island’s tourist industry. The fire was deep (more than 10m below the waste) and could not be dug out which is the traditional approach to quelling landfill fires. Measures to reduce the temperatures and engulf the oxygen around the fire (using surface water and nitrogen injection) were successful in the short-term (a few hours and days at most) but could not be sustained. The site is coastal and due to the groundwater hydraulics and sea water levels, the only option left was to attempt to extinguish the fire by turning off the leachate pumps, and allowing leachate and the ingress of sea water levels within the waste to rise, whilst at the same time as injecting fresh water into the waste at depth and at high volumes.

The natural sulphate content of the seawater meant that there was a high likelihood of hydrogen sulphide emissions from the site during the procedure. Additional risks of chronic or acute structural failure from flooding a previously “dry” waste mass and the potential for pollution from discharging the resultant leachate were also of serious concern to the project team. Should there have been negative impacts on the surrounding seawater colouration, beaches and odours, the tourist impact would have been fundamentally damaging to the island’s economy.

The obvious risks associated with these activities were high and the potential for disruption to the island’s waste management activities during this period would have been considerable, should the site have to close. As such it was decided to bring in HAZOP specialists to help plan the project in detail.

A HAZOP process is one by which every step or part of a process is identified and broken down in to the smallest parts for practicable consideration (see Figure 1). Each step in the process is then reviewed extensively with the intention of highlighting all the possible scenarios that could go wrong, suggesting mitigating factors to be put in place to stop it and establishing the steps which need to be taken if it were to happen.

The overall outcome of a HAZOP assessment is a process where all possible and practicable actions and preventive measures are put in place to remove or reduce the impact of any failure/leak/breakdown of every part of a process. It identifies the importance and level of risk associated with each potential failure/leak/breakdown and establishes additional measures that may be needed on standby for contingency planning. Mitigation measures employed for the landfill fire project included backups of all pumps, key pipework joints, electricity supplies, personal protective equipment and monitoring methods. Additional leachate aeration and a cover for the discharge tanks were installed, with additional internal odour suppression measures. The installation of a small mobile flare was also completed to handle any reductions in gas quality and increases in gas volumes.

A ‘traffic light’ monitoring scheme was put in place identifying the actions to be taken based on increasing thresholds, with 18 hour monitoring by staff. On-island emergency services were fully briefed prior to the works and prepared to respond as appropriate in an emergency, all of which had been considered during the HAZOP analysis.

Throughout the HAZOP process, the team was fully inclusive of the island’s government departments, including representation by the Island’s local Waste Regulation Officer. His presence in all of the HAZOP meetings and additional outside discussions was key to ensuring that, on completion of the final HAZOP meeting, reporting went to the regulators and was approved for action. Stakeholders were given confidence that the process was a thorough one, covering all perceived risks to an appropriate level of detail (see Key HAZOP Techniques sidebar). The thorough and transparent nature of the HAZOP process also allowed the Office of Environmental Health & Pollution Regulation to relax licensing conditions for the site on a temporary basis. This made for productive relationships during the project and the monitoring period that followed it, without the concerns of ‘outside interference’.

The final agreed arrangements were that fresh water from two nearby pumping stations was to be pumped to the Torrey Canyon Quarry neighboring the landfill and would then be pumped from Torrey Canyon into Mont Cuet. Flow rates for the two pumping stations were confirmed and calculations made to ensure that these would provide enough water at a constant rate for a prolonged period needed.

In total, the drawdown period continued over 68 days (April 19 to July 5, 2009), slightly longer than was planned, due to sustained higher temperatures recorded in some waste locations. It was agreed to continue water injection to ensure these higher temperatures had fallen before completing drawdown.

One year after the operation was successfully completed, data collected indicates that there have been no further subsurface fires. 2010 gas samples indicate that carbon monoxide levels remain low at 0.0002% v/v and hydrogen levels were recorded at 0.0122% v/v.

The HAZOP methodology employed was the first of it’s kind on a landfill fire, and was undertaken due to the hydraulic conditions at the site, the local concerns over sea levels and groundwater levels, and the potential impacts on the island’s economy. If similar circumstances or concerns exist at other sites anywhere in the world, then the use of the HAZOP methodology is strongly recommended. 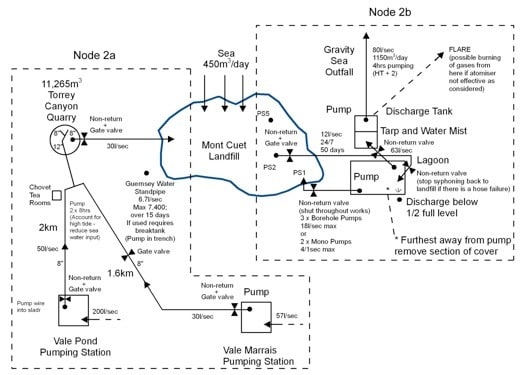 The following are critical for ensuring the smooth running and effectiveness of a HAZOP process: