By scanning and automating paper documents, two recycling companies have streamlined operations and used less waste throughout the entire organization.

Folks in recycling tend to like discarded office paper as it is one of the more valuable items found in the trash. But as the industry expands so does the record keeping involved, so many recyclers are using computer software to reduce paper use in their offices.

For the past 20 years much larger organizations in insurance, finance and government have been turning office paper in filing cabinets into electronic images stored on computers. As regulatory and public interest in recycling grows, many in the industry are now doing likewise and finding the technology has evolved well beyond building electronic filing cabinets inside computers.“We want more than an electronic archive,” says Vance Luc, IT director for national recycler Lakin Tire. “We want documents to flow through our system rather than passing them hand to hand. We want end-to-end electronic control of our data.”

For many recyclers these days, such control is as much a matter of need as want. In its 95 years, Lakin has grown from a family-owned business into one of the nation’s largest recyclers, turning 38 million used tires collected from 5,000 retailers each year into valuable byproducts used in asphalt, aggregate, energy and playgrounds. The transactions with each retailer filled rows of filing cabinets at Lakin’s Connecticut and California plants. Pulling and circulating that paperwork by hand added hours onto each transaction and Luc knew that if Lakin wanted to take full advantage of its industry leadership something had to change. 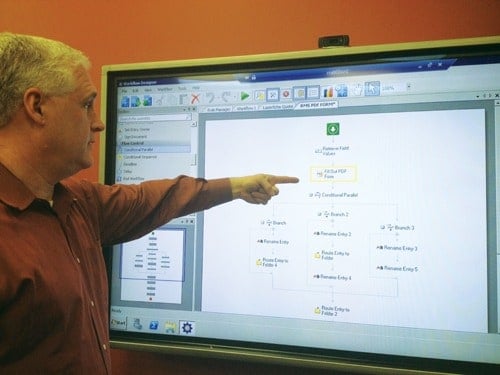 Ivan Franklin of Crabtree Companies worked closely with Gopher Resources IT staff to produce the flowchart now automating paperwork involved with battery deliveries coming from across the country. Images courtesy of Laserfiche.

So, three years ago Lakin bought a Laserfiche records management system and started converting those paper records into electronic images. Long Beach, CA-based Laserfiche is a U.S. Dept. of Defense certified designer of electronic records management systems serving three million users in 30 countries worldwide. Luc was attracted to the software because of its affordability and adaptability to any sized organization in any industry or agency. As Lakin’s documents were scanned into Laserfiche, the rows of filing cabinets were replaced with desktop computers. As the images were scanned and stored in the new system, a process called optical character recognition converted the letters and numerals in each into text that can now be searched via computer. Now, any one of those documents can be retrieved instantly from any computer in the company simply by typing a few key words, numbers, or names contained in that document. It is the first and biggest step any organization looking to go paperless must undertake, Luc said, and it changed forever how Lakin deals with documents. “We no longer have to hold on to and work with physical documents,” Luc said. “Now, anytime we need a document we can instantly access it rather than dig through cartons and cartons of paperwork. It sped things up greatly.”

As Luc has gotten more familiar with the system he has learned there is much more to records management technology than electronic archiving. Over the years, electronic records management has evolved into what today is called enterprise content management: software systems which can build a virtual office by automating operations traditionally done by hand. With enterprise content management, records can be routed automatically and accessed via PC, tablet, or smartphone. Incoming records are passed electronically through an organization and eventually on to archiving and/or scheduled destruction, all automatically.

Lakin’s Laserfiche system came with a full suite of enterprise content management software and shortly after the records were all scanned in Luc went to work seeing what else the system could do. Luc installed Quick Fields, a product that allows for high-speed scanning of batches of files, pulling select information—called metadata—from each document in the process. The metadata can then be used to narrow searches among the millions of electronic documents Lakin has scanned into the system. “Now we have electronic document validation,” Luc say. “We capture the data, tag it and make sure everything gets sorted correctly into an electronic filing system we designed based on our record keeping needs. Where physical validation of paper documents used to take two or three people, now it takes one and instead of always having a backlog of documents to validate now we’re running up-to-date.” 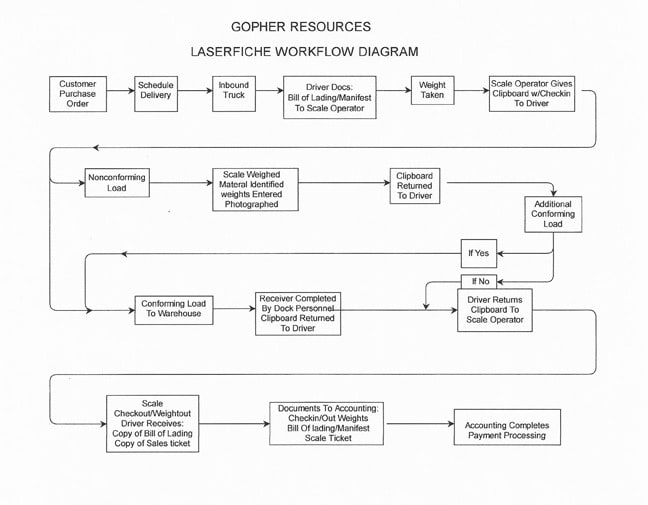 Laserfiche Workflow turned the messy paperwork behind recording and weighing used battery deliveries into an automated process that cut hours off each customer order. 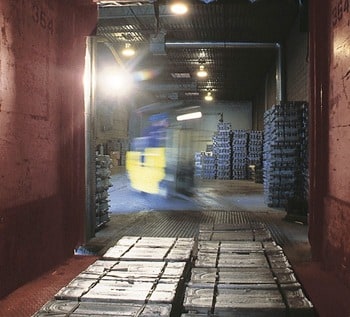 Gopher Resources processes 20 million used batteries a year into valuable raw materials for making new batteries. The company installed a Laserfiche enterprise content management system to improve the efficiency and accuracy of the record keeping behind those deliveries.

Like Lakin, Aspen Waste Systems is also growing, from one plant in Minnesota to a Midwest regional waste management leader with offices in Minneapolis-St. Paul, St. Louis and Des Moines. And like Lakin, Aspen also started out using its enterprise content management system largely as an electronic filing cabinet. But as the company grew so did its administrative overhead. Having multiple locations also meant multiple back office operations all doing essentially the same functions, just for different segments of Aspen’s customer base. Aspen Vice President Thor Nelson wanted to consolidate those operations into one electronic system accessible from all three offices. He turned to enterprise content management experts Solbrekk Business Technology Solutions of Minneapolis for help. He wanted to build a digital workflow to move hundreds of incoming invoices each month past the people responsible for getting the corresponding checks cut.”Everything at Aspen was entirely paper-based with big folders being passed around hand to hand,” Nelson says. “We wanted to make the approval process electronic so it didn’t matter where the approver was, they could access any records they needed, any time. We wanted Aspen’s AP to be location neutral.”

So Solbrekk worked with Nelson to map out the different points in Aspen’s invoice approval process, identifying areas prone to error and or delay along the way. Solbrekk then installed a software system called Workflow now automatically routing documents past the designated individuals faster and with fewer mistakes. Along with reducing staffing and records storage and maintenance costs, the whole process helped Aspen’s AP department run a lot smoother.“Workflow forced us to think about the discipline we have in our approval process, and how to address the risk areas we had,” Nelson says. “Not only did we achieve the original goal of making the approvals electronic, there are fewer mistakes in those approvals. That wasn’t the primary goal when we started out on the project but in some ways it’s been just as important.”

Other lessons in digital workflow were learned by Gopher Resources, one of the nation’s largest recyclers of lead-acid batteries. The 10 million batteries Gopher converts each year into ingots of lead alloy and high quality plastic resins must go through a careful sorting process that got more difficult to document as the company grew.

Gopher’s two plants in Egan, MN and Tampa, FL, receive thousands of truckloads of dead batteries shipped from all over the country. Shipping and handling lead acid batteries is heavily regulated and loads must often be sorted after delivery. Delivery trucks would be weighed at the entrance to Gopher’s recycling plants and the driver was handed paperwork, which was then passed back and forth as the load was broken down into component products for processing. It was a complicated process which could require weeks to complete one invoice, according to Ivan Franklin, vice president of Crabtree Tree Companies (Egan, MN), a Laserfiche reseller, was brought in to help Gopher digitize its paper-based records keeping systems. “Most loads were relatively clean and the documentation relatively straight forward,” Franklin says. “But some loads could be considerably less so. We needed to design a system that could seamlessly automate the flow of record keeping involved in processing each load, whether they were fairly clean and uniform loads or holding an assortment of batteries.”

Like Lakin, a diagram of the paper trail involved in Gopher’s battery delivery operation was mapped out with each potential step identified. Like Lakin and Aspen, Gopher was also using its enterprise content management system largely for records storage and retrieval when it hired records management specialist Janice Butler to see what more the system could do. Butler became thoroughly familiar with delivery and off-loading operations at both plants and when Crabtree proposed digitizing the whole delivery and payment process, Butler knew just what was needed. “When she diagramed it out for us it was one of the coolest things I’ve ever seen in a workflow diagram,” Franklin said. “It took just a few weeks to get the whole thing done. When you have a real records manager on board, someone like Janice, than you have someone who appreciates what this technology can do for a company and she maximizes that ability. She gets it, it’s not like we have to explain everything to her.”

Lakin and Aspen are getting it as well and looking for more ways to turn their electronic records management systems into enterprise content management systems. Solbrekk is talking to Aspen about expanding the workflow built in the AP department to other aspects of the business while Luc is eyeing a Laserfiche software system that will allow the company to use electronic forms instead of paper forms to streamline onboarding new customers. “Our ultimate aim is not just to eliminate paper in processing customer orders,” Luc says. “We to want automate how documents go back and forth throughout our entire organization.”

Autocar, LLC, Celebrates Made in the USA Day