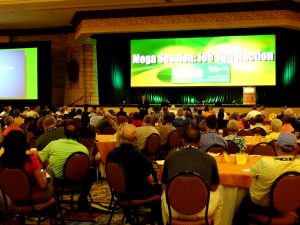 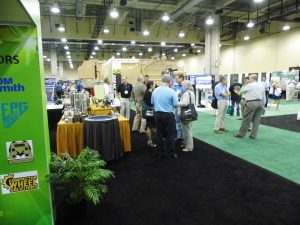 WASTECON®’s second day started early with an array of activities, including two Mega Sessions, one featuring the Lawrence Lecturer, Kenneth Baylor from Progressive Waste Solutions who spoke about job satisfaction in the workforce. He interwove his experiences and advice to make for an informative session. He touched on the problem with the industry’s image and how we need to change the perceptions, the fact that people are your most important asset and breaking old habits. He stressed that company leadership has to find a way to keep people motivated with lots of opportunity, respect, sharing knowledge and recognizing the great work employees do everyday. Brian Tippetts, SWANA President, was the moderator for the session and before the session ended, he challenged the audience to take the time to think about what they heard and to use it in their personal and professional life.The following Mega Session, featuring speaker Sarah Sladek and introduced by Michelle Leonard, SWANA Vice President, was aimed at preparing the audience and leadership for the changing workforce. She went through the different generations of work cultures, how each of them think, react and respond to a variety of situations and how to complement their styles and talents. Sladek aslo touched on the next biggest workforce, Generation Y as well as Generation Z, both of whom have grown up with technological devices in their hands. She stressed the demographic shift and that waste management jobs have the potential to grow 10% each year (according to the Bureau of Labor Statistics), but that the industry’s challenge is to keep people interested in wanting to work in this job culture. Finally, she presented a series of questions for the audience to think about in their companies, with regards to knowledge, responsibility, delivering value and other factors for retaining employees. It was a great lecture, followed by a Q&A session that allowed the attendees to ask her about their own unique situations. At the same time as the sessions were occurring, attendees were also taking SWANA certification exams as well as taking advantage of the SWANA training center, which focused on collection operations and systems, composting programs, solid waste management systems, and managing recycling systems. On the show floor, which was open from 11am to 5pm, attendees continued to visit with exhibitors, learn new technology and talk with companies about solutions to fit their needs. The trade show reception at the end of the day allowed even more networking opportunities at the SWANA Break Zone by offering fun, food and drinks to everyone on the floor. The technical sessions also taught attendees throughout the day on topics like the greening of large cities, dealing with an aging gas extraction system during landfill closure design, the changing waste stream, metering and optimizing waste collection and much more. At the close of WASTECON®’s day two, attendees got ready to party the night away at the Glass Cactus nightclub at the final event of the show, the networking reception hosted by the Texas Chapter of SWANA. Located on the Gaylord Texan’s property, attendees and exhibitors hopped on the hotel shuttle to arrive at the night’s venue which started just after the close of the show floor.  Featuring a fabulous outdoor patio with a great view of Grapevine Lake, people came prepared to relax, converse and dance the night away on the nightclub’s 2,000 square foot dance after a hard day’s work. As the sun went down, the atmosphere was lit up with lights, laughter and smiles all around as people grabbed drinks from one of the venue’s four signature bars which were about as big as the nightclub itself. Relationships and friendships were renewed and there was lots of networking all around. It was a great way to relax and close out the show’s night time celebrations as well as prepare for the last day of exhibits and training!