In early 2013, the City of Homestead, FL successfully transitioned fromcollection of recyclables and bulky waste from twice a month to once a week.

Homestead is currently divided into 12 zones for garbage collection, as shown in Figure 1. The garbage is being collected twice a week from each zone. The collection days for garbage from each zone are either Monday and Thursday or Tuesday and Friday. The city wishes to maintain the existing zones and collection schedule for garbage. The main project objectives are to:

The following data was required to model the existing garbage zones and new recyclables/bulky waste zones:

The average pickup time by collection equipment for the various types of waste was assessed by conducting field investigations and observations. CDM Smith followed the trucks for a day on each representative waste collection zone to evaluate the average pickup time at each stop. Video and pictures were taken for each representative zone. Several drivers were interviewed to determine the routes followed in all the zones for all three waste categories. The main objective of interviewing the drivers was to obtain their input on revising the collection zones for recyclable and bulky waste. The following assumptions (based on the conducted field observations and input from the SWD staff) were used for the average pickup time at each stop for the various waste categories:

The12 zones for garbage were modeled using the software and the assumption described above. Figure 3 shows a summary report for all the garbage routes for each zone. The waste collection time varied from 4.5 to 8 hours. The average waste collection time was approximately 6.5 hours. The summary report estimated quantities of waste generated, number of homes serviced, stops made, estimated mileage, and trips to the landfill facility for each zone. The summary report also provided analysis on the number of straight roads, left and right turns, U-turns and dead ends, and U-turns made in a zone during waste collection.

These results are based on estimated quantities from the collected data. Actual quantities may fluctuate based on seasonal and participating residence variations. A contingency plan has been developed to accommodate these variations with input from the SWD. The waste collection time for the various zones varied for both recyclables and bulky waste and is based on calculated waste quantities from the collected data. In reality, actual waste quantities and collection time varies for each zone based on several factors. These factors include lifestyle of certain communities, the degree of waste recycling and the size of lots in the communities. However, the results seem to be reasonable and conservative to a certain degree.

The proposed zones were finalized with input from the SWD staff. The finalized zones (A through D) are shown in Figure 2.The recycling schedule remains the same every week. Zone A, B, C and D will have Monday, Tuesday, Wednesday, and Thursday recyclables pickup, respectively.  One of the project goals was that the bulky waste collection be alternated each week so that all the residents receive either Monday or Tuesday pickup every other week (early pickup). In order to accommodate this, Zones A and B will have an alternate Monday and Thursday pickup of bulky waste, and Zones C and D will have an alternate Tuesday and Friday pickup of bulky waste. The schedule for the zone A is shown in Figures 4 as an example. Similar schedules were developed for the remaining zones.

An implementation strategy was developed to educate the public on changes to the waste collection zones and schedule by creating a public communications plan. The SWD staff was provided proper training to ensure that the revised schedule and zones for recyclables and bulky waste collection would be implemented smoothly on January 2, 2013.

As a member of the project team, Media Relations Group, LLC, St. Cloud, Florida, worked with the City to develop the content of the public communications plan for this project.  In the third week of November 2012, the residents were informed of the good news that the city was increasing the collection of recyclables and bulky waste from twice a month to once a week, beginning January 2, 2013, at no additional cost. The residents were informed via bill inserts sent to their homes along with their monthly billing statement. This message was also posted on the website. Several advertisements were also placed in local radio stations and the residents were also informed via post cards sent directly by the City. Once the final map and the zones were developed, it was posted on the website. A magnet calendar was developed for each of the four   zones and included the entire year’s schedule for garbage, recycling and bulky waste collection. The residents were instructed to stick their calendars to the refrigerator or any other visible area to easily remind them of their scheduled pick-up dates. As a follow up to the massive advertisement campaign, an information hotline was established to answer any questions that the residents may have in regard to the new service and changes. This hotline would remain active until the last week of January 2013.

CDM Smith conducted two training sessions with the City staff during the first three weeks in December. Detailed maps for the various zones and collection days for each waste stream were developed for training. Enlarged maps with turn-by-turn directions were also developed. CDM Smith provided training on the revised zones and schedule for recyclables and bulky waste collection. Training was also provided on turn-by-turn directions all the zones to optimize the waste collection routes. CDM Smith emphasized to the SWD staff the changes to the recyclables and bulky waste collection routes, the annual calendars for the zones, and the importance of understanding and implementing these changes in the field successfully. Truck drivers will be given extra calendars for their zones to disseminate to the public, as needed, and assist them if they have any questions. CDM Smith also provided the City with an excel spreadsheet that includes residential addresses of all the zones in the City of Homestead that receive residential waste collection, along with a schedule for garbage, recycling and bulky waste pickup.

Waste Collection with the Revised Zones and Schedule

Dr. Ravi Kadambalais an Environmental Engineer for CDM Smith (Cambridge, MA) and works out of the West Palm Beach, FL office. Dr. Kadambala has more than four years of design and field experience in solid and hazardous waste engineering, water and wastewater engineering. He has experience in designing and operating bioreactor landfills, designing and permitting municipal solid waste landfills, gas collection system and surveying. Dr. Kadambala can be reached at (561) 689-3336 or via e-mail at [email protected]

Dr. Abdul Mulla Salehis an Environmental Engineer for CDM Smith and works out of the Tampa, FL office. Dr. Mulla Saleh has more than 32 years of landfill engineering and other solid waste management experience, including sustainable waste management cradle to cradle, zero waste, and carbon neutral concepts. He has sited, designed, permitted, managed, and provided technical guidance for solid waste projects throughout the country and abroad, including lined landfills and transfer stations, landfill closures, groundwater contamination assessment and remediation plans, drainage systems, and leachate collection and treatment systems. Dr. Mulla Saleh can be reached at (813) 281-2900 or via e-mail at [email protected]

Julio Breais Director of the City of Homestead’s Director of Public Works and Services since 2003. Julio has more than 23 years of experience in the field of Civil Engineering, specializing in the design, construction and operation of public utilities and infrastructure. Before coming to the City of Homestead, Julio practiced Civil Engineering for over 18 years as a consultant specializing in water, wastewater, solid waste and environmental engineering for municipal utilities in the United States and abroad. He can be reached at (305) 224-4770 or via e-mail at [email protected] 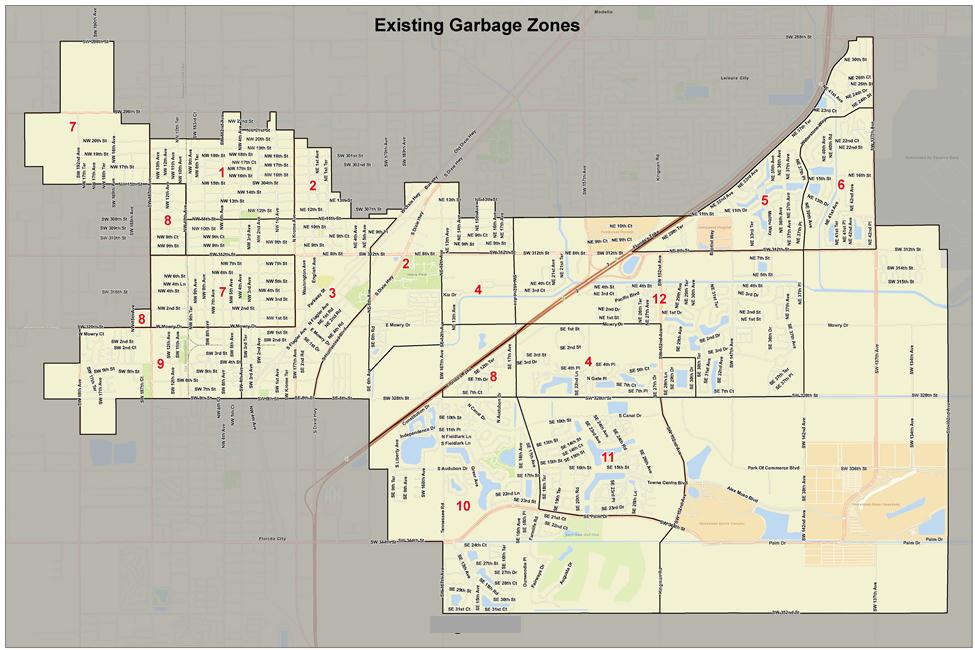 Proposed zones A, B, C and D for both recyclables and bulky waste collection.

Summary report for all the garbage routes for each zone.

Some States Mandate Food Scrap Recycling. In Connecticut, Some Towns Do it Voluntarily.