As an expansion of Lebanon, TN’s successful citywide “Think Green – Think Clean” initiative, the Gasification Initiative began in 2015 with the concept of looking for a way to reduce waste in Lebanon, TN. The city’s landfill had about eight years left at the time. Because the city was on a tight deadline, they looked at adopting solutions that would effectively handle waste. The gasification project came into play as a way of reducing the wood waste and sewage sludge. The city had land available at the Waste Water Treatment Plant (WWTP) and since a project of this size takes only a couple of acres, the decision was made to locate the gasification plant on the on the WWTP site due to a significant part of the process that included the processing of the sludge the plant produces.

“Many people were involved in the development of this project, including the previous and current mayor, the wastewater treatment plant manager who was integral in solving some of the technical issues as well as Aries Energy who sold us the technology, and in the process, they became a consultant in bringing it up to full speed and have been an excellent partner. It has been a full team on deck to get this up and running. In October 2016, the facility was in operation and as of November 1, the city took over,” says Project Manager, Scott McRae.

The facility serves a 22-mile radius for wood collection, while the sludge is right onsite at the wastewater treatment plant. “We have a public/private partnership with the city of Lebanon and Rockwood Recycling. The recycling company picks it up, grinds it and then they send it over to us as a wood chip. They do all the collection and processing so that we can just process the chip into gas,” explains McRae. In addition, the solids from the wastewater treatment plant are processed and turned into clean energy as well. These two key waste streams were very expensive to eliminate each year. This facility takes the waste and processes it and turns it into green electricity, saving the city hundreds of thousands of dollars per year.

Communication and the Media
When this project began, there was very little opposition from the surrounding community due to the fact that this is a very green project. From an environmental standpoint, the gasification process produces no negative effect, such as emissions. When the plant gasifies the wood and sludge, the end results are valuable byproducts—one is the gas, the second is biochar that can be sold. McRae points out that the gasification technology has been around for several decades and there have been many companies that have sought to have their gasification facilities operational, however, the city of Lebanon’s facility is the first one that has come online with great results and people were eagerly waiting to see if and how it worked. “We set some milestone records with this project. We recently just ran 100 days non-stop without major glitches. Now people are talking about this is the kind of technology they want to get behind.”

Since the project has come online, communication has been extensive. The gasification plant has been in local, national and international media. People are also visiting the site from all over the country and the world to look at the facility. The city also won regional and national awards as well, it has been in the local paper and McRae has spoken about the project at a local rotary club in the area trying to let people know the facility is so unique. “There are people still out there that want to hear this message,” he says.

A Step in the Right Direction
Although it was a longer road than expected to get the facility to where it needed to be, adjustments have continued to be made during the process and as needed, such as introducing and feeding the sludge the right way into the plant. Says McRae, “With each challenge that we came across, they have been hit head on by the city and our partners to make sure we overcome it. This means as much to them as to us.”

It does take a couple of employees to monitor the plant on a constant basis. However, because it is on the site of a wastewater treatment plant, wastewater treatment operators can be cross-trained to watch the gasification plant as well. In addition, there is an employee monitoring the traffic and receiving the wood, inspecting it and making sure it is what is required. McRae points out that the city has the plant budgeted for two shutdowns per year for maintenance. “As it becomes more routine, we expect that it will only need one, but in the early infancy we would rather catch anything that is going on and allow for repair and adjustments twice per year than let it go on and become a problem. Right now, we want everything to shut down so we can visually inspect the facility and digest what it really needs.” 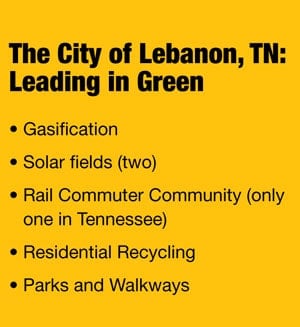 Long-Term Goals
McRae is most proud of being part of the first and largest downdraft gasification process in the world. “It is very exciting for the city of Lebanon. Because we are the first, our goal right now is stability, being able to prove that this thing worked and making sure we get to the point where our employees are operating as part of their routine.”
In addition, McRae is always looking at other ways to reduce alternative waste streams. “There are other possible ones for this project, so we are looking at next technology to start working on our municipal waste as well. Ultimately, Lebanon’s Gasification Initiative will divert more than 16,000,000 pounds of waste from landfills every year, cleanly producing electricity to help power our wastewater treatment plant; and produce end product that the city can sell. This will further position Lebanon to be a leader in sustainability and is a major part of the city’s long-term goal to divert all landfill waste to productive uses.”

Says the City of Lebanon’s current Mayor, Bernie Ash, “Our City is proud to be Clean and Green with so many examples—gasification, solar, the only Nashville area community with commuter pail, parks and trails and so much more.”

Not Wasting Waste: How Arlington and Alexandria Turn Trash Into Electricity