The average person generates over 1.5 tonnes of solid waste per year, but which country produces the most waste in a single day?

The average household produces more than a tonne of waste every year – and it’s during the festive period that we waste the most. In fact, over Christmas we create 30 percent more waste than usual. Everything from cards and envelopes, wrapping paper, boxes from biscuits and chocolates, shopping bags, wine bottles and toy packaging – on average, each household will chuck out an extra five bags of waste over Christmas, adding up to 736,571 tonnes of refuse every year.

But just how wasteful are we? eC02 Greetings have delivered a list of the most wasteful countries. You can view the full interactive map here.

Overall recycling rates are increasing, but so is our population. Countries around the world are generating large amounts of waste as their populations grow and their economies expand. The amount of waste generated by urban residents in 2016 is estimated to have doubled to 1.2 kilograms per capita per day from 0.64 kilograms per capita per day 10 years ago. On a yearly basis, this equates to 1.3 billion tonnes per year in 2016, versus about 680 million tonnes per year a decade ago.

The World Bank has reported that the amount of urban waste being produced is growing faster than the rate of urbanisation. In fact, by 2025 there will be 1.4 billion more people living in cities worldwide, with each person producing an average of 1.42kg of municipal solid waste (MSW) per day – more than double the current average of 0.64kg per day. Annual worldwide urban waste is estimated to more than triple, from 0.68 to 2.2 billion tonnes per year.

The top producers of waste are small island nations. These include:

Waste accumulation in places like Kuwait lack proper landfills to dispose of all the waste, whereas in places such as Antigua, Barbados and St. Kitts, a large majority of waste is accumulated due to tourism. What is clear is that none of these countries have the necessary infrastructure for proper sanitation and waste removal. In fact, recent reports suggest that more than half of the world’s population does not have access to regular waste collection.

On the flip side, the more urbanised and industrialized a country become, the more waste it produces.

The top producers in the developed world are:

Are you doing enough to recycle, reduce and reuse? Make sure this Christmas isn’t a wasteful one! 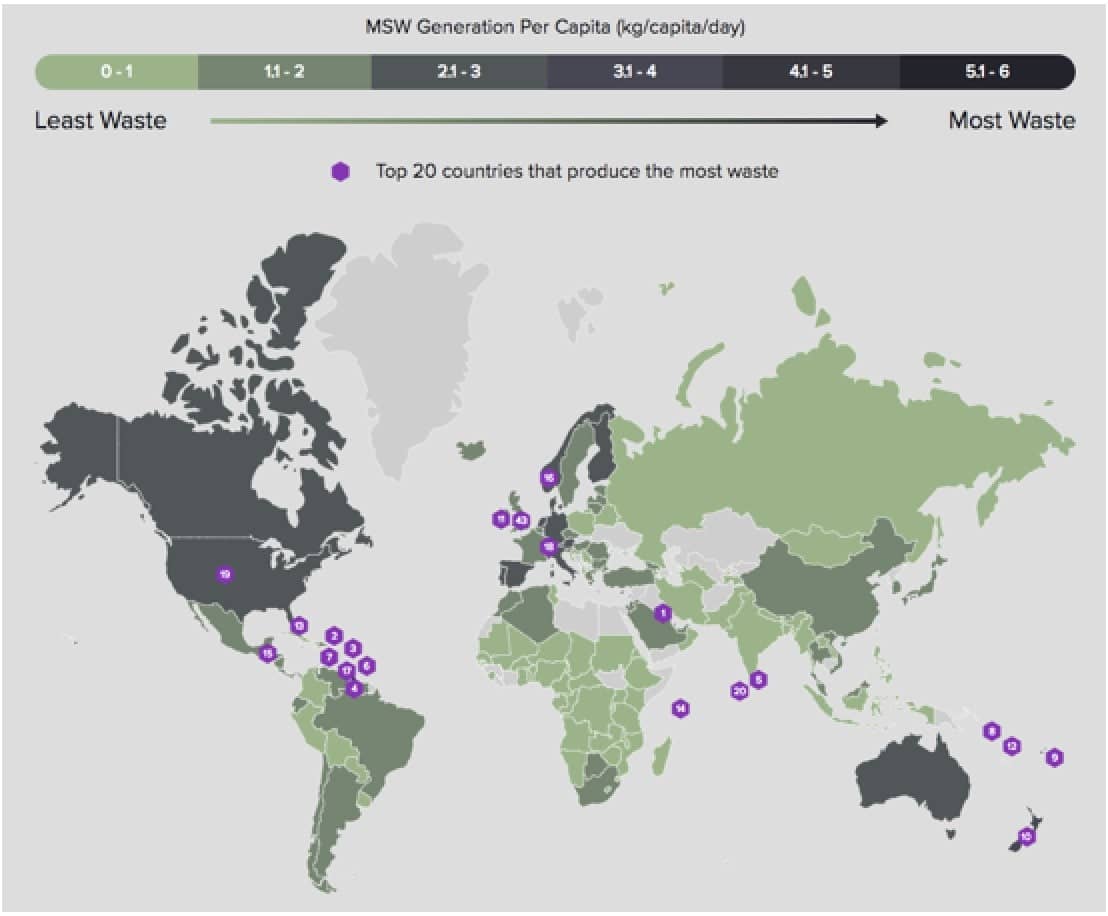