Located in Sanford, FL, Waste Pro’s Garbage Truck Museum focuses on the importance of remembering and preserving the industry’s past and boasts a collection of original and restored antique waste collection trucks that showcase the company’s rich history of innovation. Museum Curator Scott Collier discusses its development, what visitors can expect to see on display and its impact on the community. 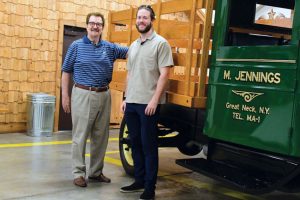 How long has the museum been open? In 1993, John Jennings purchased a 1948 Dodge B Series Garwood Dump Body, which was originally down in Ft. Pierce, FL and later brought to Ft. Myers, FL where it was restored. Years later, in 2006, he began to dream of opening a garbage truck museum. That dream became a reality in 2009 when he purchased the property in Sanford, FL to move Waste Pro’s growing hauling company. The Sanford property was previously home to an ambulance factory; it now houses the museum and Waste Pro’s Central Florida Regional Headquarters.

Since then, the one-of-a-kind museum has expanded to more than 30 finished trucks on display, with another 40 awaiting restoration. There have been more than 200 visitors over the years, ranging from large groups to parents and their children as well as small tours. Of course, traffic was higher before the COVID-19 pandemic.

Who was involved in the decision to open it? Some of John’s earliest memories are riding on routes with his father looking for bottles, newspapers, cardboard and rags to remove from the waste stream to sell. During these early years, John saw how hard people in this industry worked to ensure that streets and neighborhoods were kept clean and safe as well as the extreme value his customers found from exceptional service and a positive attitude.

Over the years, John dreamed of creating a space to showcase the wonderful history of solid waste collectors and the evolution of their collection vehicles. Waste Pro’s museum is a legacy to John’s father, an Irish immigrant who earned an honest living and taught John the importance of service and the impact our solid waste workers have on the cleanliness of the communities they serve. This space and these vehicles are a tribute to the many wonderful people that are at times overlooked in a thankless job in our society as well as the time that John spent serving this industry.

Where do all of the truck models come from? How do you find them? We have purchased trucks from as far away as Washington, Oregon and California on the West Coast, as well as several Midwestern, Northeastern and Southern states. Some are by word of mouth, some from online sites like Facebook Marketplace, E-bay and Craigslist, as well as companies John has known about over his career. Several trucks have also been donated to the Museum.

We have also had refuse memorabilia donated for the library mainly by people in the refuse industry. This includes many sales brochures, manuals, pictures, toy trucks and advertising memorabilia. The library is a place for those to sit to read through some of the history, view pictures from our ever-growing collection or watch vintage videos on one of our two kiosks. The museum, on the other hand, houses all of the restored trucks for our visitors to see and includes brochures, ads, factory and personal photos, diecast trucks, toys, etc. Videos are rotated out periodically on our Kiosk & Digital Photo Frames; there is plenty of room to display the rest of the material.

What kind of facts and history can museum attendees expect to find? We are expanding our content monthly. As an example, our library was recently furnished and we are working on labeling and placing material for visitors to see. This includes factory photos, actual company pictures from up to 80 years ago, brochures, ads, magazines, old annual reports from both existing public companies and those no longer in existence, books and two digital displays with a selection of old refuse truck videos. Some material has been donated and some was purchased or created by us. We display all refuse-related companies’ (including competitors) memorabilia and photos.

How often do you upkeep the vehicles on display? Are they rotated out for others every once in a while, or are all on the museum floor? We keep the trucks clean daily during the work week. We have a retired Veteran Front Load driver who spends several hours a day in the museum keeping them in great condition. We currently rotate trucks around as they get
completed to group them by year, and we provide trucks for parades, movies and community events. Prior to the pandemic, we hosted the local Chapter of the Antique Truck Club of America’s monthly meeting. We also have had a vehicle in the Winter Park, FL Christmas Parade. Things have quieted down during the pandemic, but activity is slowly starting to pick up again.

What are the most popular items on display? It’s hard to say which specific truck is the most popular. A lot of the visitors we see come through may have worked with specific trucks just like the ones we have on display. They share their stories as we tour the trucks. Kids seem to like just about any of them and love getting into the Autocar Display cab that we have set up for them to explore.

What is the oldest model you have on display? 1922 Mack AB with a Leach Refuse Getter body. The second oldest is a 1925 Mack AC Dump body—an original Dunn open body coal truck that eventually picked up both ash from the burnt coal and other trash and rubbish from those same places that they originally delivered coal to. Thus began the “Ash and Rubbish Removal” you saw on trucks throughout big cities in the 1930s to the 1940s, 1950s and 1960s.

Some Makes and Models on Display

What are the hours/days it is open? The museum is open Monday through Friday from 8 am to 4 pm, but we will make appointments and try to work with our visitors. We have some visitors who stop here first before going to Disney World on their vacations to make sure they don’t miss the visit. We have had visitors including reporters from the London Daily Mail, Readers Digest, and even groups from Sweden and Ireland. During the past year, our amount of visitors has slowed down, but people are starting to return.
Any future plans for the museum? We have many great trucks we are working on restoring. We will be dressing up our drive-through bay and converting it into a mid-century New York alleyway theme. And we expect to open the Museum to school groups, community events, and industry events. There have been discussions of expanding since we won’t have room for all of the trucks we are restoring. We do have a satellite museum in our Southaven, MS location that currently has three trucks on display. | WA