The use of ozone in odor control is well established. As with any technology, the success lies in understanding how ozone can be properly implemented.
By Allan Finney

The reduced sulfur compounds are considered to be the most problematic due to their characteristically offensive odors combined with their low odor thresholds, although several compounds or classes of compounds may combine to produce offensive odors (long-chain compounds) (Miller et al., 1988).

Several odor reduction measures have accordingly been investigated. These methods include simply altering the choice and/or quantity of raw materials that are suspect sources of odor, such as reducing the amount of poultry manure (Miller and Macauley, 1989; Pecchia et al., 2001) or gypsum (Beyer et al., 2002) as possible sources of odorous reduced sulfur compounds. These alterations of formulation have met with varying degrees of success in reducing odor emissions, but the possible detrimental effects of such alterations on compost quality and mushroom yield are always a concern to the grower.

Semi-permeable coverings of compost piles, which purportedly retain odor compounds while allowing the release of ammonia and respiratory gases, have been investigated as a means for reducing odors (Beyer et al., 1997). The feasibility of biofilters for removing malodorous compounds from mushroom compost emissions has been demonstrated (Op den Camp et al., 1995). However, methods such as pile coverings and biofilters require periodic maintenance and adjustment, thereby becoming an investment of time and expense on behalf of the mushroom farm.

Forced Aeration
The use of forced aeration technology to aerate the compost in tunnels, or bunkers, has become the most popular method for reducing mushroom substrate odor emissions. The compost in the bunkers or tunnels is periodically aerated by the forced passage of air through the compost from slatted floors or nozzles or spigots located on the floor of the bunker (Miller et al., 1990; Noble and Gaze, 1994). Several studies have indicated that forced aeration may have varying degrees of effectiveness in reducing mushroom substrate odor emissions (Noble et al., 2001, Perrin and Macauley, 1995; Duns et al., 2003). 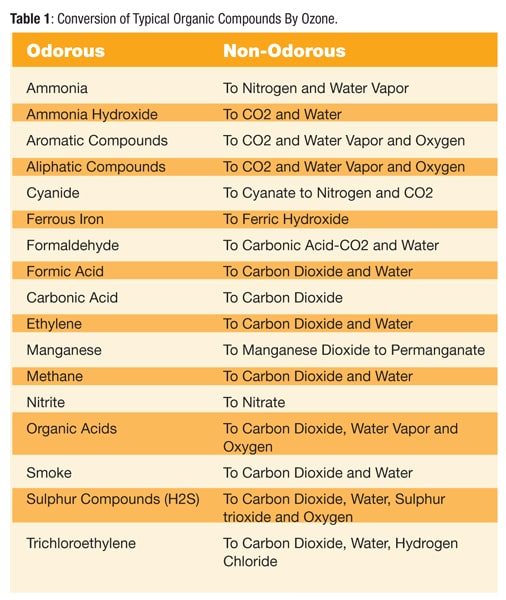 Reductions in the emission of odorous compounds in the range of 75 to 90 percent have been reported, although other studies have actually indicated an increase in the levels of odorous compounds in mushroom substrate treated by forced aeration (Op den Camp et al., 1995). Thus, additional and/or alternative and practical techniques for reducing odor emissions from mushroom substrate preparation are required.

Ozonation For Odor Control
Ozonation is one such alternate method for odor control. The principal of treatment of odors by ozonation involves the addition of Ozone (03) diluted in air to a ventilation system to evacuate the odorous compounds. Ozone is a powerful oxidant and a very reactive and unstable chemical. Ozone treats odors by oxidizing odor compounds to form chemicals with less offensive odors or possibly no odor at all. At long contact or mixing times between ozone and odor compounds and with sufficiently high ozone dosage levels, the ultimate products of the ozonation of hydrocarbons are carbon dioxide and water (see Table 1), but in most cases the ozonation products are less odorous oxygenated chemicals (Nebel and Gottschling, 1975).

The use of ozone for the successful treatment of odors from various sources has been documented for some time. Ozonation odor treatment has been applied to many industries or processes, including rendering plants, fish processing plants, sewage treatment plants (Unangst and Nebel, 1971), rubber compounding plants and paint spraying facilities, as well as numerous other applications (Nebel and Gottschling, 1975).

Ozonation has also recently been applied to the treatment of odors from agricultural sources, such as swine production (Van Sickle, 1999; Kim-Yang et al., 2002). Finney (1999) reported the successful removal of odors from traditional windrow mushroom composts from a mushroom farm in British Columbia as determined by an odor panel, using a temporary treatment facility. Ozonation also has an advantage as a method of odor treatment in that ozone can be generated onsite from ambient air and thus requires only the initial investment of ozone generation equipment and a ventilation system to collect gases for treatment.

Greenwood Mushroom Farm Lawsuit
On July 12, 2007, the Ontario Superior Court of Justice ordered the action brought against Greenwood Mushroom Farm by neighboring property owners dismissed, without costs. In July 2004, 150 plaintiffs filed a claim with the court seeking in excess of $10 million for damages as a result of nuisance, alleging that the odor emission discharged from the mushroom operation into the natural environment caused loss of use and enjoyment of the plaintiff’s property, affected the health of the plaintiffs and had an adverse effect on the natural environment.

Through a research project coordinated by the Canadian Mushroom Growers Association, an odor control system using ozone technology was successfully developed to mitigate the odorous exhaust associated with bunker composting on a commercial scale application. The project was funded by the Ontario Agricultural Commodity Council, Agricultural Adaptation Council and Greenwood Mushroom Farm. Engineering, design and technical support for the project was provided by Envron Environmental Ltd., and AirChem Consulting and Research Inc.

An ozone generating system was installed at Greenwood mushroom farm in Ontario in order to control the emission of odorous compounds during the Phase I preparation of mushroom substrate. This ozone system was custom designed and adapted to operate in conjunction with an existing forced aeration Phase I bunker facility. A ventilation system with manifold and ductwork was installed to direct the compost gases containing odor compounds into a reaction unit consisting of two mixing tanks connected in series. Ozone is produced by applying a corona discharge to oxygen concentrated from air and drawn into the reaction unit using a variable frequency fan and mixed with the substrate gases. This system provides for an odor control system with facile operation and minimal maintenance. Chemical analysis was performed on samples of substrate gases collected in Tedlar bags taken before and after contact with the ozone. Reductions in odorous sulfur compounds of the gases in the range of 20 to 60 percent were obtained with the ozonation. Large variations in the sulfur compound content of both the pre- and post-treatment samples were observed, resulting in the observed range of reduction. The extent of the reduction appears to be dependent upon the operating conditions of the aerated bunker such as operation of the aeration fan, which generally results in increased input of odor compounds. Increasing the amount of ozone introduced into the system appears to increase the efficacy of the system for reducing sulfur compound levels.

Ultimately, the order by the Ontario Superior Court of Justice was the result of a motion made by the plaintiffs requesting the dismissal on consent of both parties. Neighboring property owners and the community agreed that the introduction and use of ozone to control the odor in the Phase I composting process had successfully alleviated their concerns.
Several recommendations have been put forward by AirChem regarding improving system performance, which have been successfully implemented in subsequent odor control systems.

Lessons Learned from the Greenwood Ozone System
Testing and operation of the Greenwood system resulted in a number of recommendations by the consultants and operator. These include:

Increases in Contacting/Retention
The original system installed on the Greenwood bunkers allowed for several seconds of contacting/retention. As noted in the Duns report an increase in contacting/retention times will result in further degradation of odorous compounds greatly increasing efficiency. In subsequent odor control installations in slaughterhouses and other industries, the use of longer retention times has increased the efficiency of ozone being used for odor control in general.

System Efficiency Increased
There are two types of ozone demand in an odorous airstream—short-term or “instant” ozone demand and “long-term” ozone demand—that would, given enough contacting and retention time, result in the breakdown of all reactive substances (see Table 1) to non-odorous.
The practicalities of achieving this level of odor control would result in contacting/retention systems that are simply too large to be practical. However, by increasing contacting/retention times while simultaneously increasing ozone dosages, the level of odors can be significantly reduced, surpassing the Greenwood results.

Conclusions
The use of ozone in odor control is well established. As with any technology, the success lies in understanding how ozone can be properly implemented. For composting operations and mushroom composting operations in particular industrial scale odor control with ozone offers several advantages:
• The system footprint is relatively small in comparison to biofilters
• Ozone generators are now much more efficient
• Maintenance issues have largely been resolved for operators
• Systems are not hindered by weather or environmental conditions
• Cost of operation is favorable over existing technologies
• Capital costs for systems are favorable over existing technologies 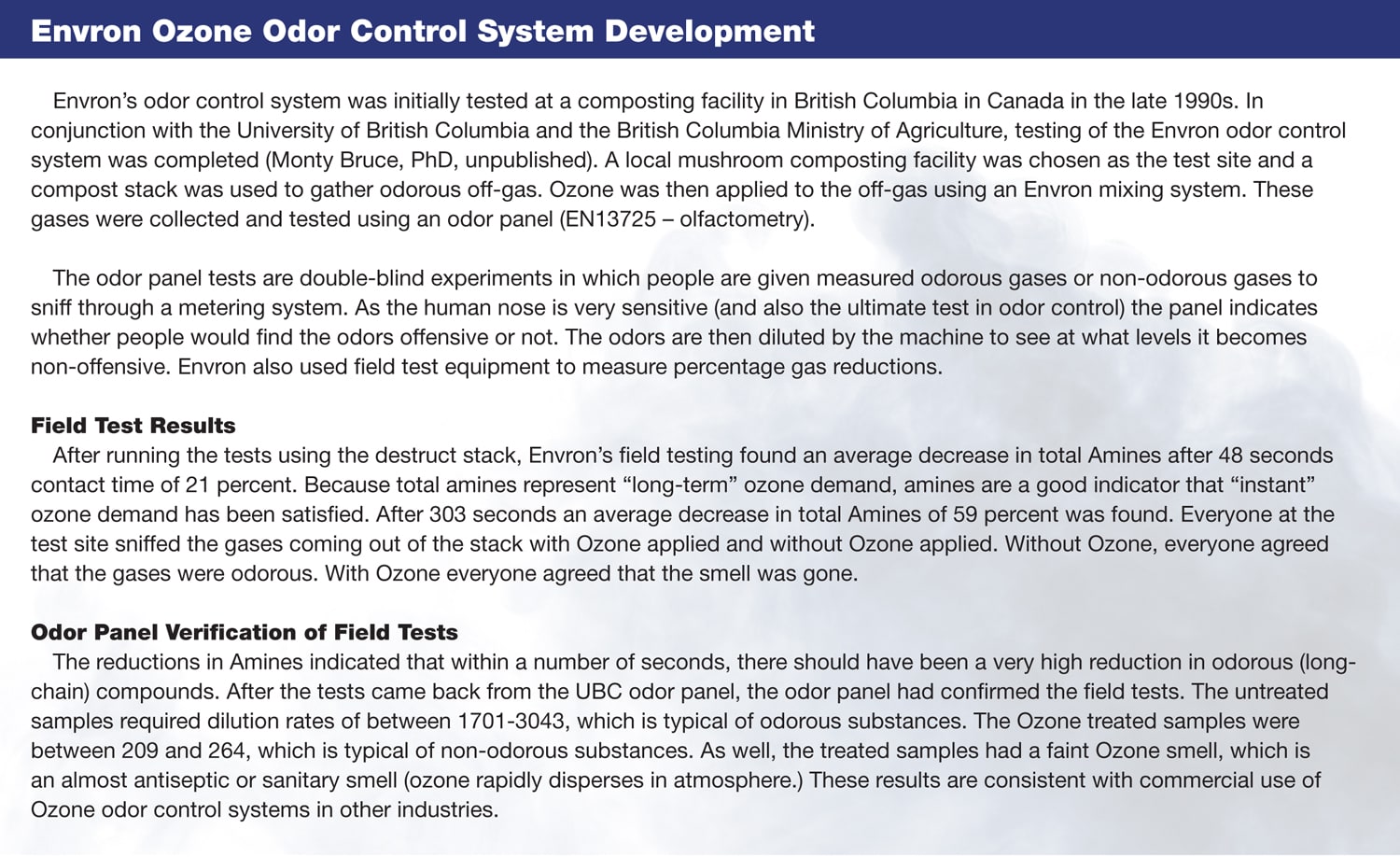 Allan Finney is the owner of Envron Environmental Ltd. (Regina, SK) and has operated the company for 31 years. He has been instrumental in the development of ozone-assisted biofiltration, odor control systems and other ozone-based technologies. Allan can be reached at (306) 924-3040, e-mail [email protected] or visit www.envronozone.com.